Neighbors have been donning wings and tutus to deliver adult beverages and other goodies. 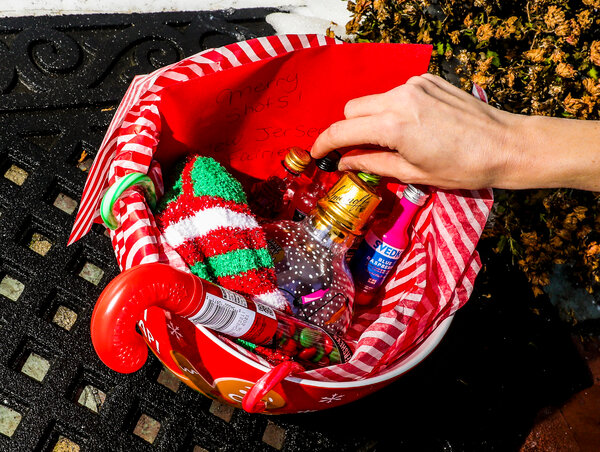 Savannah Dana, 26, was mentally congratulating herself for sneaking into a gated community around Nashville when she noticed blue flashing lights in her rearview mirror.

The police officer questioned the alcohol in Ms. Dana’s car; there was an abundance of it, and she’s pregnant. Her explanation only made the situation worse. She had gift bags for several women she didn’t know who weren’t expecting her, she told him, and she didn’t want them to know she was there. She claimed to be a mythical creature.

As the officer searched her vehicle, Ms. Dana, mortified, pulled out her phone and showed him anything she could: a Facebook group, messages with instructions, texts with addresses. Eventually, he allowed her to drop off the handcrafted gift bags before personally escorting her out of the neighborhood gates.

It was her first day as a booze fairy, and it was thrilling.

This year, women around the country have staked out each other’s homes in the name of a quest that gained popularity during the pandemic: raising spirits by giving spirits, anonymously. Booze fairies, as they’re called, bring together the childhood thrill of ding-dong ditch with a side of Secret Santa and a dash of adult beverages. Sometimes, they wear wings and a tutu.

The concept of fairies dropping off gifts and granting wishes is familiar from children’s customs and literature (most famously: tooth). But the origins of the modern-day booze fairies are mysterious and murky. Several groups claim to be the original, yet most are unaware that others exist. Certainly there are more since the pandemic.

Booze fairies operate on a “pay it forward” philosophy. Participants share their addresses (and alcohol preferences) with volunteer group leaders, who then assign them to various other fairies. Each gift basket comes with a new address to deliver to, and thus a fairy is born. Those who are only out for free drinks get their wings clipped quickly.

Erica Weaks, 29, from Greenbrier, Tenn., started a group in May, which quickly grew to nearly 3,000 members. Along with booze, Ms. Weaks likes to include comfort items in her gift baskets, like fuzzy socks, bath bombs, body wash, games and snacks.

“This has 100 percent restored my faith in humanity,” she said. “It’s the sense of not being alone, of knowing someone out there cares about you and will do whatever it takes to put a smile on your face.”

Amanda Frank, 41, is a flight attendant from Sonoma, Calif., who became a booze fairy in August. One of her favorite gift combinations is something she used to serve frequently on planes: a mini bottle of vodka and a can of Bloody Mary mix.

“It really is the thought that counts, and the excitement of receiving something you weren’t expecting,” said Ms. Frank. “The women in the group are insanely talented.” There have been face coverings, homemade goodies, fancy cocktails, themed baskets. After getting engaged, she received a “bride-to-be” basket with champagne, orange juice, a bridal sash and a balloon in the shape of a diamond ring.

Even more than the gifts, perhaps many booze fairies found delight in the art of covert delivery. Fairies have wiped out while running across lawns, splayed face down with wings flapping in the breeze. They have been caught by confused, barking dogs or bored, watchful children gazing out the window. Concerned neighbors have called the police.

“Any chance to partake in shenanigans, I’m in. The fact that there was no contact, that you could be mysterious, the risk of getting caught — it was so intoxicating,” said Jessica Lombardo, 31, who started a Sonoma-area booze fairies group early in the summer.

“I love my kids, but we all need a little bit of adult interaction, and this is a pretty safe way to do it,” she said.

On Nichole Blackwell’s first “booze drop,” she staked out a stranger’s house like a teenager with a crush.

“I drove by and kept turning around like an absolute creeper, recalled Ms. Blackwell, 25, from Hendersonville, Tenn. Eventually, she parked down the street, sprinted up to the door to drop off her gifts, then raced back to her vehicle with glee. “It felt like I did something bad,” she said. “It was so much fun.” 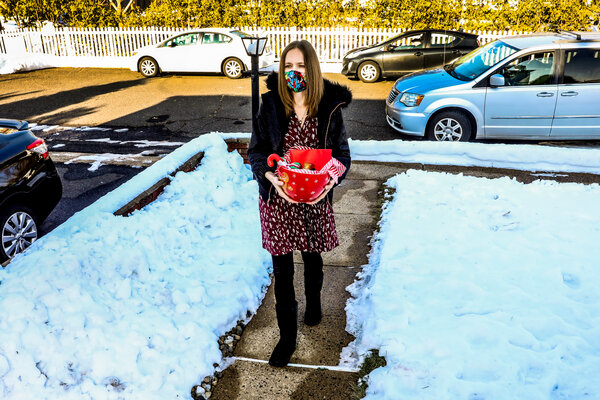 After receiving a gift basket, the polite thing to do is post a photo of it in the group with a thank you. Often, friendships then develop. These self-proclaimed Drinkerbells may have initially bonded through booze, but many went on to organize charity fund-raisers, clothing drives and toy collections.

When a woman mentioned she couldn’t make Thanksgiving for her family this year because of knee surgery, Corinne Pennington, 40, helped cook and deliver a full dinner to her home in Nashville. “That just made my day, being able to help someone,” Ms. Pennington said. “This group has been a godsend to me, to be able to connect with other women.”

Pam Giorgi, 57, from Glen Cove, N.Y., delivered with her brother James Pascucci, 53, who has Down syndrome, the two in matching fairy wings. Her online friends were so charmed by Mr. Pascucci that they organized an impressive outdoor birthday party for him last October.

Local pandemic restrictions, as well as sensitivities to group members who pause their alcohol consumption, have made fairies more creative. (This year, the pandemic has led many women to examine their relationship with alcohol and how it factors into their daily lives.) They cobble together little gifts they’ve had around the house, or things they’ve picked up while shopping for necessities, and use dollar-store art supplies to enhance the packaging. Skin care products, bath bombs and fuzzy socks are popular. So are art supplies and fun notebooks. Many add in their own creations, like hand-sewn face masks and personalized wine glasses.

“I’ve probably spent a small fortune on supplies, but honestly that’s not what our group is about,” said Amanda Lee Sohl, 34, from Shirley, N.Y., who works in client services at a local nursing home. “You can leave me a candy bar on my stoop and I’ll love it because someone took time out of their day to deliver it.”

Dana James, 33, in Mount Laurel, N.J., searched for a local booze fairy group in June, three months after she lost her job doing tax certifications. Since then, she has “boozed” 80 other women.

“This group has brought so much positivity and helped keep me busy in quarantine. It brings a smile to my face knowing that someone thought of me,” Ms. James said. “I also love watching a fairy run up to my house in a tutu and wings.”

For many women, being a part of the booze fairies has given them a chance to expand their alcoholic repertoire — for better or worse.

“I’ve learned that canned alcohol is all the rage among the ladies right now,” said Karen Nau, 60, a widowed preschool teacher in Petaluma, Calif. “I’m old school and like a good bottle of wine.”

“Before this group, I knew next to nothing about alcohol. There are so many different kinds,” said Summer Cutler, 35, a stay-at-home mom in Bridgewater, N.J. She relies on the owner of a local liquor store to recommend most of the drinks for her gift baskets.

Often, fairies do some light research on their recipients to personalize their gifts. If women have pets or children, their gift baskets will often include toys. In one group, a fairy delivered a gift basket with markers and poster board after noticing someone’s protest photos. Some groups have a recommended small business list to help fairies shop local.

Carrie Carmean, 39, a medical support assistant from Hendersonville, Tenn., joined a booze fairy group when her niece invited her in May. By day, she works in a doctor’s office screening people for Covid. Planning out baskets provides her, and them, with some levity.

“I love giving people a note to let them know they are beautiful, or some encouraging words, because you never know what others are going through and this could change their day,” she said.

Pre-pandemic, groups for booze fairies might have attracted only alcohol connoisseurs. But in a year when many people felt forcibly detached and lonely, the delight in a surprise gift on the doorstep is magnified.

Lupita Ortiz Botello, 38, from Laredo, Texas, quit her job during the pandemic when her kids started online schooling. In an effort to socialize, she joined her local booze fairy group three months ago.

“It’s hard to make friends. I’m usually shy,” she said. “This makes me feel useful. It’s amazing how a little surprise can make you feel excited about what’s next.”