Not long before the latest fully-digital London Fashion Week began on February 19 — with a pared-down schedule that reflected the ongoing fallout of the pandemic on the sector — more than 450 leading industry figures, including designers like Paul Smith, Katherine Hamnett and Roksanda Ilincic, sent an irate letter to 10 Downing Street.

In it, signatories claimed that the newly inked Brexit trade terms negotiated between the European Union and Britain could threaten the survival of hundreds of fashion businesses “disregarded” by the last-minute deal. The local industry, the letter said, was potentially facing “decimation” thanks to the newly redrawn geography of Europe. 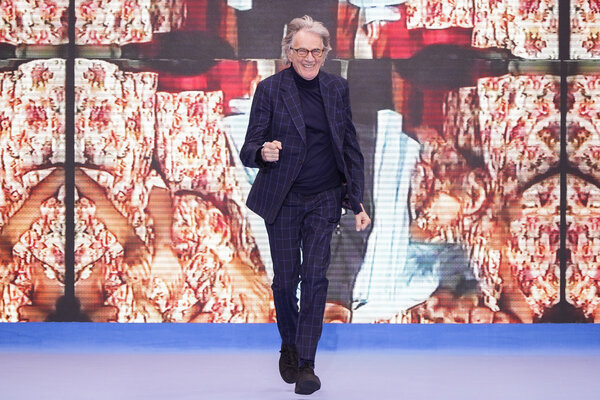 “The deal done with the EU has a gaping hole where promised free movement for goods and services for all creatives, including the fashion and textiles sector, should be.”

Even Samantha Cameron, wife of the former prime minister David Cameron — the leader who held the referendum in 2016 that resulted in Britain’s decision to leave the European Union in the first place — said in a BBC radio interview that her contemporary fashion label, Cefinn, was being hampered by post-Brexit “teething issues.”

“If you’re bringing goods into the country from outside the UK, and then trying to sell them back into Europe,” Ms. Cameron said, “then that currently is very challenging and difficult.”

That the majority of the British fashion industry continues to rail against Brexit is of little surprise. Over the past five years, homegrown start-up brands, international luxury houses, top London design schools and rural textile producers had all expressed concerns over whether Britain would maintain its reputation as a creative and commercial hub for fashion once Brexit took place.

More recently, last year, as the clock ticked toward a Dec. 31 deadline, fears over the possibility of no deal grew, bringing with it heavy new taxes on traded goods and gridlocked ports at a time when the British economy had already taken a battering in the pandemic.

That scenario was avoided at the eleventh hour. But as Britain adjusts to its new position outside the bloc, a chorus of voices from across the fashion sector are expressing growing concern about what comes next.

Take John Horner, chief executive of Models 1, a London-based modeling agency that represents Naomi Campbell and Lara Stone. For decades, he has booked models for runway shows or magazine shoots abroad on less than a day’s notice, with at least a quarter of all revenue generated from European jobs. But free movement between Britain and the EU ended January 1, resulting in new visa requirements. Mr. Horner believes that the additional layer of paperwork and costs will have a dramatic impact on business.

“Models now need one of 27 visas to go and work in European countries — it will be an ongoing administrative nightmare,” Mr. Horner said, noting that the British creative industries were clubbing together to put pressure on the government to negotiate visa-free working agreements for performers and professionals. “I think we’ll also see a number of international players just bypass London as a place for shoots and to do business, opting for European cities instead.”

According to industry body Walpole, 42 percent of all British luxury goods are exported to the EU. Now, Britain-based fashion brands are contending with mountains of new customs procedures and taxes, where one erroneously checked box or stroke of the pen can mean time-consuming delays or fines.

Jamie Gill, chief executive of Roksanda, said that the fact that the deal was hammered out in the final moments of 2020 meant there was little time for anyone to adjust to the unfamiliar bureaucratic hurdles and penalties, from brand employees based in Britain to their small artisanal suppliers and manufacturers in Europe.

“There is just so much learning of new rules to do on the job, both for us and for big logistics partners like FedEx and DHL,” Mr. Gill said. “There are delays in every regard right now, everyone is getting things wrong and it’s costing both time and money. The industry breathed a sigh of relief when no deal was avoided and we retained zero tariffs. But the pandemic means it’s pretty tough out there, and every brand wants to get goods on the shop floor and online as soon as they can.”

Last week, the British Fashion Council, the industry lobbying body, said that it was in “live and ongoing conversations” with government officials on travel restrictions, and was working with designers and brands to help them get up to speed with paperwork and understanding customs regulations around rules of origin for products.

Not to mention import issues. Many EU consumers buying goods from the websites of UK-based fashion retailers are being handed customs and tax bills of 20 percent or more of the cost of the goods, and British customers buying from the EU are also being hit with additional bills.

Adam Mansell, boss of the UK Fashion & Textile Association, warned that it was currently “cheaper for retailers to write off the cost of the goods than dealing with it all, either abandoning or potentially burning them. Lots of large businesses don’t have a handle on it, never mind smaller ones.”

Another blow for many fashion brands and retailers is the British government’s decision to end the Retail Export Scheme on January 1. The scheme, which allowed international visitors to claim back 20 percent of value-added tax on their purchases, had long allowed wealthy foreign tourists to make pricey purchases, tax-free, in Britain. Now, luxury power players like Burberry, Harrods and the Oxfordshire shopping outlet Bicester Village believe the new laws will reduce the attractiveness of Britain as a luxury shopping destination right at a time when such a lure is needed most.

In December, 17 luxury and retail companies estimated that one billion pounds worth of planned investment into infrastructure like store expansions and distribution centers would be lost because of the lowered demand as shoppers headed elsewhere, an impact that would be felt by ordinary Britons, not just marquee luxury names.

“It is wrong to think of this as an issue that only affects the West End; over £500 million of tax-free shopping takes place regionally, including in Manchester, Edinburgh, Birmingham, Glasgow and Liverpool,” said James Lambert, deputy chairman of Value Retail, which owns Bicester Village. The outlet mall, designed to look like a small town where the denizens include Burberry, Gucci and Dior, has become one of Britain’s most popular tourist hot spots.

“The ramifications will be felt throughout the retail supply chain and the hospitality industry across the UK,” Mr. Lambert said.

Still, not all businesses are as pessimistic. While some British silk and thread suppliers said that feedback from their European clients was that they would shop from European suppliers rather than accept extra charges and hassle, Brian Wilson of cloth manufacturer Harris Tweed Hebrides felt the short-term hurdles were nothing that could not be overcome.

“We are not in the same position as grocers or those with perishable inventories who are clearly having a terrible time,” he said.

Harris tweed is a hard-wearing, all-weather textile handwoven by Hebrides islanders in their homes. While 14 percent of the fabric is exported to fashion manufacturers in Europe, Mr. Wilson said the American, Korean and Japanese markets remained robust and that trading with those countries had remained steady, minimizing the Brexit disruption.

The Cabinet Office, which as of Feb. 19 had still not formally responded to the Fashion Roundtable letter, said it had been offering helplines, webinars and business support to those from the fashion sector. For companies already buckling from the strain of ongoing lockdowns and a year of the pandemic, however, it may not be enough.

Katherine Hamnett, the veteran fashion designer long known for her plain speech, summed up the situation for her peers.

“If there isn’t a radical overhaul,” she said, “British brands will die.”