PARIS — The Cannes Film Festival is in starlet red-carpet swing; the billionaires are back in Sun Valley; and in Paris — “It’s like a school reunion, no?” said Carine Roitfeld, the French fashion editor, flicking her veil of hair from her black-lined eyes and glancing around the Dior show on Monday as the first live couture week in more than a year began.

Many of the gang was sitting, as always, in a specially constructed box in the gardens of the Musée Rodin, this time hung with a swath of embroidery featuring an imaginary landscape created by the French artist Eva Jospin and realized by the Chanakya School of Craft in India over the course of three months. Attendees who had not seen one another since early 2020 air-kissed and embraced in delight. Ms. Roitfeld looked amused, if not entirely pleased, about the whole thing.

It’s true, there was something somewhat disconcerting about the headlong return to the familiar: The paparazzi clamoring for a shot of Jessica Chastain and Jennifer Lawrence; the pass-the-Champagne multicourse vegan dinners to celebrate every night; the stilettos clicking on the steps of the Palais Galliera.

So while the audience was no longer jammed so tightly together that each seat on a bench seems to be on top of a neighbor’s leg, and masks were still required in tents, the gravitational pull seemed backward: back to the swishy, holographic classicism of an Armani Privé pantsuit; the explosive tulle of a Giambattista Valli party dress; the intricate mosaic of a Fendi fur (though the furs were all made from vintage pelts).

Which is not to say there were not some great — and even minor — leaps forward. 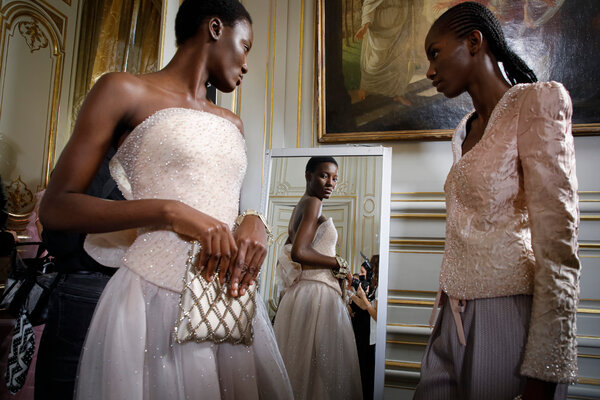 There Was a Triumphant Debut

Fifty-three years after Cristobal Balenciaga closed the doors of his couture salon, Demna Gvasalia reopened them, recreating the rooms as precisely as possible, picking up where the man generally considered the greatest couturier of them all had left off. Sitting on a gold ballroom chair where a single crimson carnation had been placed precisely on the diagonal on each seat, it was hard not to think: The walls are probably freaking out.

Because this was not a trip down some weird wormhole to the mid-20th century. It was a master class in how to learn from the past in order to get most effectively to the mid-21st. How to question everything you thought you knew, and reassess.

Instead of the old front row — Mona von Bismarck, Bunny Mellon, Babe Paley, Gloria Guinness — there was Kanye West (who arrived in full head covering), Lewis Hamilton, James Harden and Lil Baby. Instead of only lithe women on the runway, models came in all ages, shapes and kinds of beauty. (There was even a burgeoning minor-celebrity model: Ella Emhoff, the stepdaughter of Vice President Kamala Harris.)

Expectations were subverted — not just of who gets to access couture or who is included, but what constitutes a couture garment; the totems of the everyday and the street turned into elite objects.

Mr. Gvasalia played with the sack dress, sure, but it became a sack jacket: nipped in at the waist, with a portrait collar wrenched out at the clavicle to form peaks around the neck and pooched out at the shoulder blades, as if it had been caught in the act of being shrugged off. They came in fluorescent orange gabardine and shaggy, silvery faux fur, but also denim that itself had been treated as a precious fiber, sourced from original machines in Japan with silver-plated hardware.

He made a swing-back T-shirt in padded black satin with fluted sleeves and a slightly raised neck, paired with loose jeans and a gorgeous, floor-sweeping opera stole. “I suffered for three months for that T-shirt,” he said after the show. “It’s much easier to make a ballroom dress.” To be fair, though, he made those too (most often inspired by the archives), in chiffon wrapped round and round the body, or embroideries rendered somehow degraded by time. He turned parkas and anoraks and bathrobes into entrance-making opera cloaks in ruby, shocking pink and chrysoprase.

It all had the monkish purity of form, rigor and lack of extraneous froufrou that defined Balenciaga in the first place, powered by the pull-the-walls-down forward momentum that marks Mr. Gvasalia’s work. The result pierced the torpor and discontent of the last year and put an end to all those whiny questions about whether fashion really matters any more. It made you want to get dressed and go out and do something.

Obviously, not everyone can, at least in these clothes (in fact, very few people can), but at this point Mr. Gvasalia is so widely copied by every mass market brand that before you know it, there will be some version of this coming to a store near you.

And a History-Making Leap of Faith

Speaking of action plans: Iris van Herpen took as her theme the earth from above, the better to offer a certain perspective on our place in it after the isolation of the last year. To do so, she teamed up with Frenchsky diver Domitille Kiger, who swirled through the air in an extraordinary dress from Ms. van Herpen’s collection that itself seemed to exist halfway between earth and sky. (Fun fact: Ms. van Herpen is also a sky diver.)

According to the designer, it was, as far as she or Ms. Kiger knew, the first time a jump had been attempted in a gown of any kind, and she ended up having to make it out of thousands of tiny spheres to withstand the pressure of someone falling at roughly 186 miles an hour. Indeed, Ms. Kiger did her first jump in a toile — the fabric used to make the sample — and, Ms. van Herpen said, when Ms. Kiger landed, “it had practically disintegrated.”

It’s a solution that is characteristic of the designer’s work, which itself seems to exist in some realm beyond fashion: a place where a dress can become a mutating expression of the processes of life; some hybrid creature of technology and art and imagination and … recycling. (Many of the other dresses in the collection, all equally motile and alluring, were made from fibers that came from recycled ocean plastic.) Someone call the Guinness World Records.

There Were True Meme-able Moments

Viktor & Rolf, masters of the couture double entendre, built an entire show as a meditation on not just the brocade and bejeweled trappings, but the actual meaning of royalty (kind of a hot button topic these days). Not to mention the varying uses of the word “queen,” which was splashed across a variety of ceremonial sashes such as “A Royal Pain in the Ass” and “Size Queen.”

At Schiaparelli, Daniel Roseberry played “find the body part,” casting elbows, abs, noses, breasts and even the cleft of the buttocks in gold 3-D printed resin and embedding them on a matador denim jacket (made from 11 old pairs of jeans), glamorous black dresses and even accessories. A pair of high heels gave new meaning to “toe shoes.”

And the nonagenarian architect Frank Gehry showed up to be feted at a Louis Vuitton dinner celebrating his first-ever perfume bottle, which has a top that looks like a crumpled piece of aluminum foil or a remnant from a Bezos or Musk spaceship.

“We wanted to work on a wardrobe,” Maria Grazia Chiuri announced before her Dior show, which meant doubling down on near-invisible alchemy and the touch of the hand: tweed remade in cashmere, feathers and intarsia so it was like grown-up swaddling clothes; Grecian gowns so light they are like wearing air, though one actually took 12 days of minute stitching to make.

That kind of effort is almost impossible to see with the naked eye, no less the smartphone. Ditto the way the signature bouclé was recreated in sparkling trompe l’oeil Lesage embroidery at Chanel. Though the designer Virginie Viard did give a (somewhat awkward) nod to the influencer generation by oversizing the suits and adding belly button-baring broderie anglaise bustiers and boob tubes. And she paired empire-waist tunic dresses encrusted with blooms with matching encrusted knickerbockers — like leggings, the couture version.

At the end of the show, after a stately parade around the courtyard, the bride — Margaret Qualley, the actor and daughter of Andie MacDowell, in a simple, elegant shell-pink gown — tossed her bouquet over her head and it landed in the lap of Laura Brown, the editor of InStyle, who burst out laughing. You had to be there.

And It Ended With a Horror Story

For those who could not detach from their screens entirely, John Galliano threw catwalk tradition to the wind at Maison Margiela and offered instead a short gothic horror film by the French filmmaker Olivier Dahan inspired by the stories and characters Mr. Galliano makes up to conjure his collections.

There was a 19th-century fishing village, a ghost ship, a sea shanty. There was a crown of mirrored shards that summoned a supernatural pestilence. There was some sort of shadow vine regurgitated from a young lover’s mouth. A hundred years passed. There was another community, with a seer. There was dancing in shirts and underwear, animal masks and ritual. There was a third age and a modern young woman who donned the crown and became the cursed queen. There were some strobe-like effects and a blood moon.

Some of it was gorgeous. Some was silly. A lot was hard to follow. But there were also pretty amazing clothes, when you could see them.

In a sort of documentary prequel, the designer talked through the painstaking experimentation and hours that went into creating the outfits: the jackets and dresses spilling ancient wadding made from deadstock and upcycled fabrics, initially at eight or 10 times their size, and then shrunk down to mimic the effects of time and tide via enzyme and acid wash; the sweater made from piecing together crocheted “delft” tiles (the palette was very Dutch renaissance); the giant overcoats with old newspaper cuttings sewn into their surfaces like patches of the past. The sorcerer’s dress made from shards of mirror, sack dresses and voluminous lace and silk gown.

Was it couture or was it costume? Like all clothes, a bit of both.

In his intro, Mr. Galliano said it was about “anxiety, the power of nature and, when faced with that, how helpless we are.” It may have been expressed in fiction and fashion, but after the last year, there was no arguing the point.