Jeff Probst was halfway to Fiji when he got the call. It was mid-March 2020, days before “Survivor” was scheduled to begin filming, and he was on vacation with his family in Hawaii when he learned that months of work and preparation would have to be suspended immediately. The show’s crew — around 400 people — were suddenly out of work. Plans to shoot the show domestically were investigated and scrapped.

“Ironically, it was a lesson I’ve learned on ‘Survivor’ that helped me,” he said. “I always tell players, ‘You have to assess constantly and adapt accordingly.’ For me, it was, ‘OK, you can’t shoot “Survivor.” What can you do?’”

When filming seemed possible again, he called Mike White, the creator of HBO’s “The White Lotus” and a runner-up on Season 37 (“David vs. Goliath”), to pitch him his vision for the new season. “I’d wanted to birth a new era with 41, even before the pandemic,” Mr. Probst said. “After I finished, he said, ‘I just have one question: Do you think it’s fun?’”

Mr. Probst hung up the phone and rushed to his garage, where he had whiteboards filled with thoughts for the new season. He cleared them all. “I was opening the door to something new,” he remembered. “From that moment forward, literally every single idea went through one filter: Is it fun?”

Most shows aren’t having fun this many seasons in, but “Survivor” isn’t most shows. It has, remarkably, run for 21 years now, reinventing just often enough to keep devoted viewers guessing, with game wrinkles (some popular, some decidedly not) that make for consistently electrifying television. And keeping the show’s blood pumping is Mr. Probst himself, who added executive producing to his duties midway through the show’s run.

“He does all these things that you’d think, after 40 seasons, he would subcontract out and phone in,” Mr. White said on a Zoom call from the base of the Eiffel Tower, interrupting his post-“White Lotus” vacation to talk about his friend. “That’s partly why the show still is relevant: It still has life because Jeff is still so enamored with what it could be.”

“In a way Jeff is a constant in our culture,” Mr. White added. “Surviving ‘Survivor’ for 20 years is no small feat.” 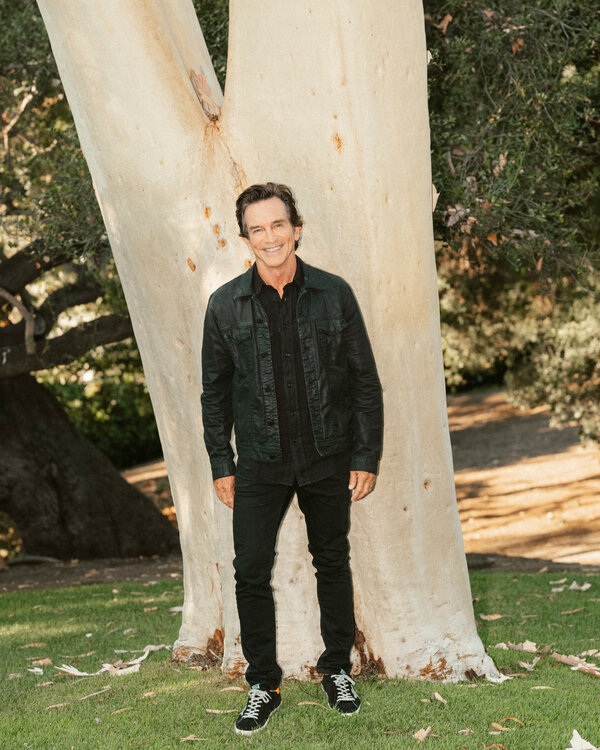 Sittin’ in the Rain

On a late summer morning, I met Mr. Probst at his home in the Studio City neighborhood of Los Angeles — a two-story stunner that once belonged to the singing cowboy Gene Autry. Though we were outside for three hours, overlooking a sprawling backyard big enough to fit several hundred “Survivor” contestants, he barely broke a sweat.

Mr. Probst never thought he’d pursue hosting as a career. Born in Wichita, Kan., in 1961, he’d watch Johnny Carson on mute, so as not to get caught out of bed. In high school, he started making short films and later joined his father at Boeing as a production assistant, producing (and later hosting) marketing and training videos.

His first foray onscreen came on a Seattle home-and-garden program. Later, a leap of faith and an agent brought him to New York, where he landed gigs hosting little-seen shows on FX. Then came a three-year stint hosting “Rock & Roll Jeopardy!” (“Maybe we don’t pitch it right now,” he said, joking about a reboot) and a year of interviewing celebrities for “Access Hollywood.”

In 1999, Mr. Probst’s interview with Sandra Bullock caught the British TV producer and “Survivor” creator Mark Burnett’s eye, proof that he could charm even the most media-trained of celebrities into answering questions honestly and compellingly. Mr. Probst had spent years auditioning for work he wasn’t excited by, shows he’d nevertheless be passed over for his lack of name recognition. But in the case of “Survivor,” Mr. Burnett said later, the host’s relative anonymity allowed them to build the show from the ground up.

“It was the second greatest decision I have made with Jeff Probst and ‘Survivor,’” Mr. Burnett wrote in an email. “First was choosing Jeff as host and second was having him become the showrunner.”

When “Survivor” premiered in May 2000, it was an instant hit — one that inspired other TV networks and cable channels to develop ambitious reality programs of their own.

As the show grew, so did Mr. Probst’s value to the network. In 2005, when he told CBS executives he was quitting, they asked him to think on it. After a few weeks of vacation, he realized he was just looking for the chance to take more on. “I had always wanted to have a big role in the storytelling, but I wasn’t ready for it,” he said. “I was still learning.”

Though CBS was initially reluctant to have its star host also assume executive producer duties — “it could get complicated,” Mr. Probst told me — Mr. Burnett won out. Mr. Probst has had a recurrring one-year deal with CBS since 2009. “No one has this kind of cavalier relationship, and no agent would ever recommend it,” he said.

“No other show on television has this kind of creative freedom,” he added. “So if we blow it, it’s on us.”

In his time as host, Mr. Probst has earned the trust of many contestants. “Jeff sees all and he’s saying it, whether you see it or not,” said Cirie Fields, a four-time player and fan favorite. “And he does it so authentically that you attach yourself to him. He’s like your brother, your cousin, your friend, your fiancé.”

A few years ago, after Mr. Probst noticed some contestants blaming producers for their “bad edit,” he wrote a “Survivor” mission statement that he and his team still consult. “Our job is to tell the most authentic version of each person’s story in an electric, visceral, dramatic, and entertaining way,” it reads. “But it must be authentic.”

“One thing is clear is that he loves it,” Mr. Probst’s friend, the director Tyler Perry, wrote in an email. “Just look at him sitting there in the rain at tribal council. He ain’t no diva. That’s the love of the game.”

Authenticity, “Survivor” fans have come to know, means warts and all. It means the show can’t, per Mr. Probst’s directive, change the intent of someone’s words during editing. It’s meant watching one contestant demand another remove her fake teeth during a tribal council as payback for a blindside. It’s even meant watching a gay contestant out a trans tribemate, equating his choice not to disclose his transness with deception.

Authenticity has also put Mr. Probst willingly in the cross hairs of the show’s opinionated fan base. “I’m not always perfect on the show,” Mr. Probst said. “I said things that I regret now, I’ve had points of view that I would change now. That was also me in the moment, being vulnerable and learning.”

Last season, one contestant, Sarah Lacina, gave a tribal council speech about gender bias: Female contestants, she said, felt held back from playing the same sort of game men could. In response, Mr. Probst pointed out his own bias of calling men, but not women, by their last names — a habit he traced back to “playing sports where every other boy called them by their last names because that’s what all your favorite athletes did.”

“I’ve never lost that part of me,” Mr. Probst said. “Those are the moments that light me up. When you realize it’s true and it’s something you can change, in doing so you’re also showing other guys, ‘You might want to check yourself as well.’”

In 2019, the show faced a #MeToo moment when a female contestant accused a male tribemate of unwanted touching. The show kept him around for a few episodes longer after a warning and production meetings with the cast, ultimately letting the players work out how best to address a situation. (He was later removed from the game off-camera after an undisclosed incident with a member of the show’s production team.) Fans and critics expressed their disappointment in how the show and Mr. Probst handled the moment, with The New York Times’s James Poniewozik calling it “inept, shameful and evasive.”

Though Mr. Probst declined to comment on that incident (“We dealt with it the best way we thought we could,” he said), he welcomed the criticism. To stay relevant, he noted, “Survivor” has had to change with the times, encountering its fair share of growing pains along the way. “I have a very healthy sense of myself,” he said. “I’ve never been afraid of being vulnerable or being wrong.”

The week we met marked the anniversary of supervillain Richard Hatch’s first-season win, a shocking upset witnessed live by 51.7 million viewers. It signaled early that although “Survivor” wanted to tell stories, producers wouldn’t prioritize traditionally “good” arcs over more nefarious ones; in the game, as in life, sometimes the bad guys come out on top.

During the pandemic, many “Survivor” fans sought comfort in the show’s archives. New fans joined, bingeing 20 years of blindsides, back-stabbing and betrayal as they waited for the world to reopen. Mr. Probst hopes they’ll stick around for what’s to come. “We’re birthing a new era,” he said. “This is a new game. We can all start together.”

The new season emphasizes, well, surviving again. The show’s 40-day filming schedule was reduced to just 26, to account for a 14-day quarantine for contestants and crew arriving in Fiji. A shortened shoot necessitated harder challenges, fewer rewards, and tougher decisions for contestants — who start this season with a pot, a machete, a flint and no food — leading to more electric tribal councils.

“The best kind of ‘Survivor’ fun is the dangerous kind,” he said with a twinkle in his eye, noting that the pandemic allowed him to reshuffle the show’s decks.

Season 41 is also the first to be filmed after CBS’s 2020 diversity goal was put into effect, requiring all the network’s unscripted programming to cast at least 50 percent people of color, precipitated by an outcry from “Survivor” alumni about a lack of support they felt from castmates and executives.

“It’s one of the most exciting things that’s happened to ‘Survivor’ in my 21 years,” Mr. Probst said of the change. “It opened the door to something we hadn’t seen, one of our own blind spots.”

Though he’s talked in the past about not knowing if the show could make it to 50 seasons, he’s since revised his stance, citing an influx of new players all throwing themselves headfirst into the competition.

“Even though their game is on the line, a great ‘Survivor’ player wants the ball with no time left on the clock,” Mr. Probst said. “They want that dangerous advantage. They’re certain they can pull it off. Because they too were the 8-year-old who dreamed of making fire one day.”