Kate, Duchess of Cambridge, 38, dazzled alongside Prince William, 37, and their three adorable youngsters as they made a surprise TV appearance to Clap for the NHS on Thursday night. Birthday boy Prince Louis, two, Prince George, six, and Princess Charlotte, four, joined their parents as they took part in the Clap for the Carers campaign from the doorstep of Anmer Hall.

The special clip was shown BBC One’s The Big Night In and followed Prince William’s comedy debut in a sketch alongside Blackadder actor Stephen Fry.

“This evening The Duke and Duchess of Cambridge, Prince George, Princess Charlotte and Prince Louis joined the UK in the weekly #ClapForOurCarers to show their appreciation for the incredible key workers working tirelessly to keep the country running.

“Ahead of the 8pm clap The Duke joined #Blackadder’s General Melchett (aka @StephenFryactually) for some video call fun on the @BBC’s Big Night In.” 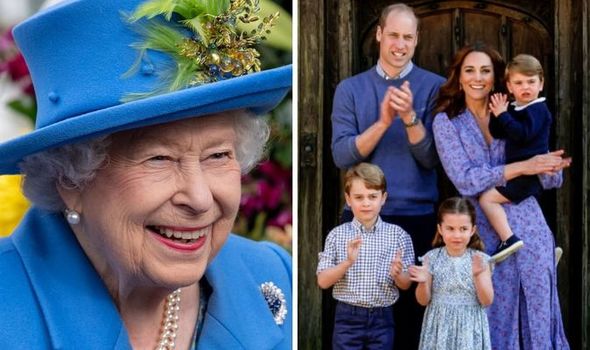 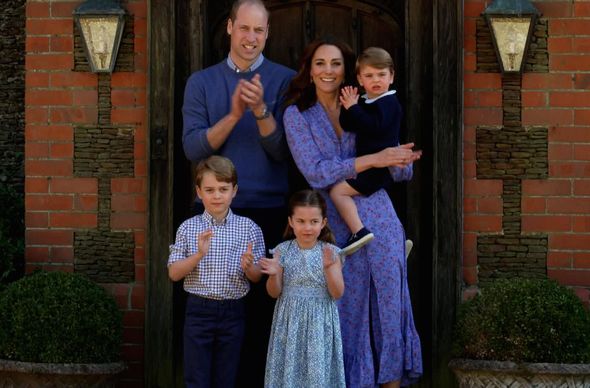 While royal watchers faced over Princess Charlotte who clearly led the way as her family filtered out onto the doorstep, Kate’s gorgeous gown was also a key talking point.

The blue floral Anouk midi dress is £129 by Ghost and is currently reduced to £90.30 online at John Lewis.

Kate is a royal fashion icon and her outfits often sell out quickly online.

The Duchess of Cambridge has been a strong presence amid this time of crisis and both she and Prince William have provided vital support to Queen Elizabeth II. 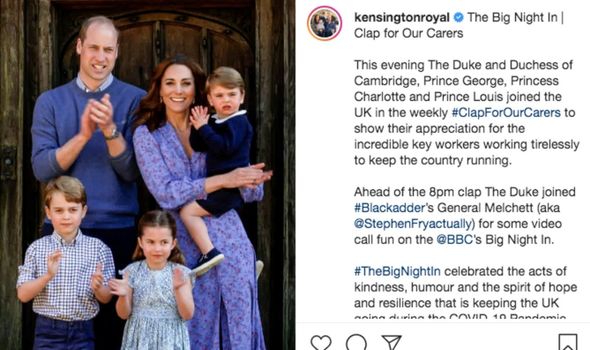 By wearing blue, Kate sent a powerful message of support to the Queen.

Not only is blue known to be the Queen’s favourite colour but it also has strong royal connotations.

Royal blue is a bright shade and a dark shade of azure blue which is deeply-rooted in royal history.

The colour is said to have been created by British clothiers in Somerset who won a competition to make a dress for Queen Charlotte, consort of King George III.

While Kate’s ghost dress was not quite royal blue by wearing the Queen’s favourite shade she seemed to wish to honour the monarch during this trying time.

However, it wasn’t just Kate dressed in blue but every member of the Cambridge clan. 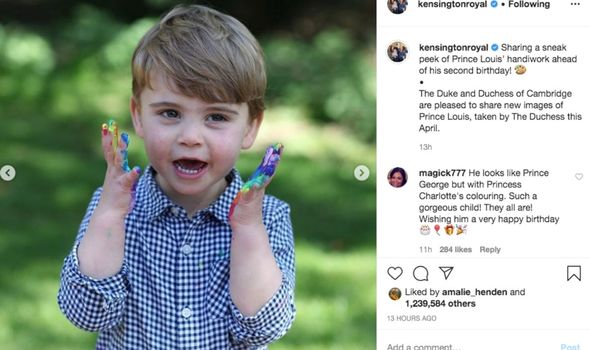 Prince George wore a blue and white checked shirt while little Louis was in a navy blue ensemble.

Princess Charlotte will celebrate her fifth birthday next weekend and royal fans are hopeful new pictures of her will be released to mark the milestone.

Mum Kate is a talented photographer and shared new portraits of Louis playing with rainbow paints to mark his second birthday on Thursday.

The adorable snaps were shared across the royal social media accounts and captured Louis in the process of making a rainbow handprint tribute for the NHS.