In the case of Maheshie Cabraal and Eli Bronner, opposites do attract.

He’s outspoken, while she prefers keeping the peace. He has always enjoyed a metropolitan lifestyle. She grew up in a small Midwestern town.

“Eli has all the confidence in the world, enough for both of us,” Ms. Cabraal said, laughing. “It really takes us places.”

Ms. Cabraal, 31, is a senior manager of sales enablement at Maven Clinic, a home health care service in Manhattan. Mr. Bronner, 33, is an art dealer and gallery director at Dinner Gallery, also in Manhattan. The two began dating shortly after meeting in October 2014 at a mutual friend’s apartment in Williamsburg, Brooklyn.

Ms. Cabraal had recently moved to Manhattan from Chicago, and was excited to explore the city — with Mr. Bronner as her tour guide.

“Eli is this really good-looking guy who is very funny on the surface,” said Ms. Cabraal, who graduated from the University of Illinois at Urbana-Champaign. “But beneath the surface he took my life very seriously. He showed a great interest in all the things I was dealing with in my life.”

Mr. Bronner, who graduated from Wesleyan University, returned the same respect and admiration. “She’s the strongest, confident, most successful woman I’ve ever dated,” he said. “She brought to my life a new level of curiousness in terms of who she was as a regular person and the kind of career-woman she was, and I liked that. It sort of kept me standing up straight.” 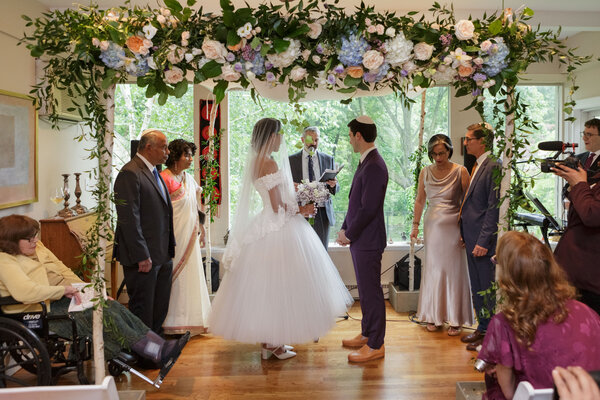 Mr. Bronner, who described himself as a “veteran of the city who is always searching for the next adventure,” can now explore hundreds of blocks with Ms. Cabraal in tow.

“Yes, we were opposites,” Ms. Cabraal said, “but in other ways, we were one and the same.”

She pointed to the fact that they were both from immigrant families, and that they are both “blindly driven” in their careers.

Mr. Bronner added that “we are both full-heartedly proud of our roots and identity.”

So proud, in fact, that Ms. Cabraal and Mr. Bronner enjoyed strolling through the streets of New York City while sharing stories of their upbringings, their hopes and fears.

“I would tell him about trips to Sri Lanka, the wild elephants on the side of the road, and my aunt who was undoubtedly the best cook in all of Colombo,” Ms. Cabraal said, laughing. “He would share stories of his childhood growing up in Tel Aviv with the sun and the sand, and a wonderful family to go along with it.”

In the ensuing months, Mr. Bronner traveled to Sri Lanka and Ms. Cabraal visited Israel, and both fell in love with the other’s extended families and cultures.

In December 2019, Mr. Bronner proposed on a deserted island in Trinidad and Tobago.

During their engagement, Ms. Cabraal made the decision to convert to Judaism. “It was a religion and culture I fell in love with through the years of our relationship,” she said.

They were married May 30 before Rabbi David Schuck and 25 guests at the home of the groom’s parents, Naomi Bronner and Ethan Bronner, in Mount Vernon, N.Y.

“From the moment I met Eli, he was more interested in the things I was saying than any other man I had ever met,” the bride said. “And it was at that moment that I started thinking to myself, ‘OK, we might have something here.’ ”