The owner of the New York boutique T.A. talks shopping habits, business philosophy and the pieces she has her eye on this season. 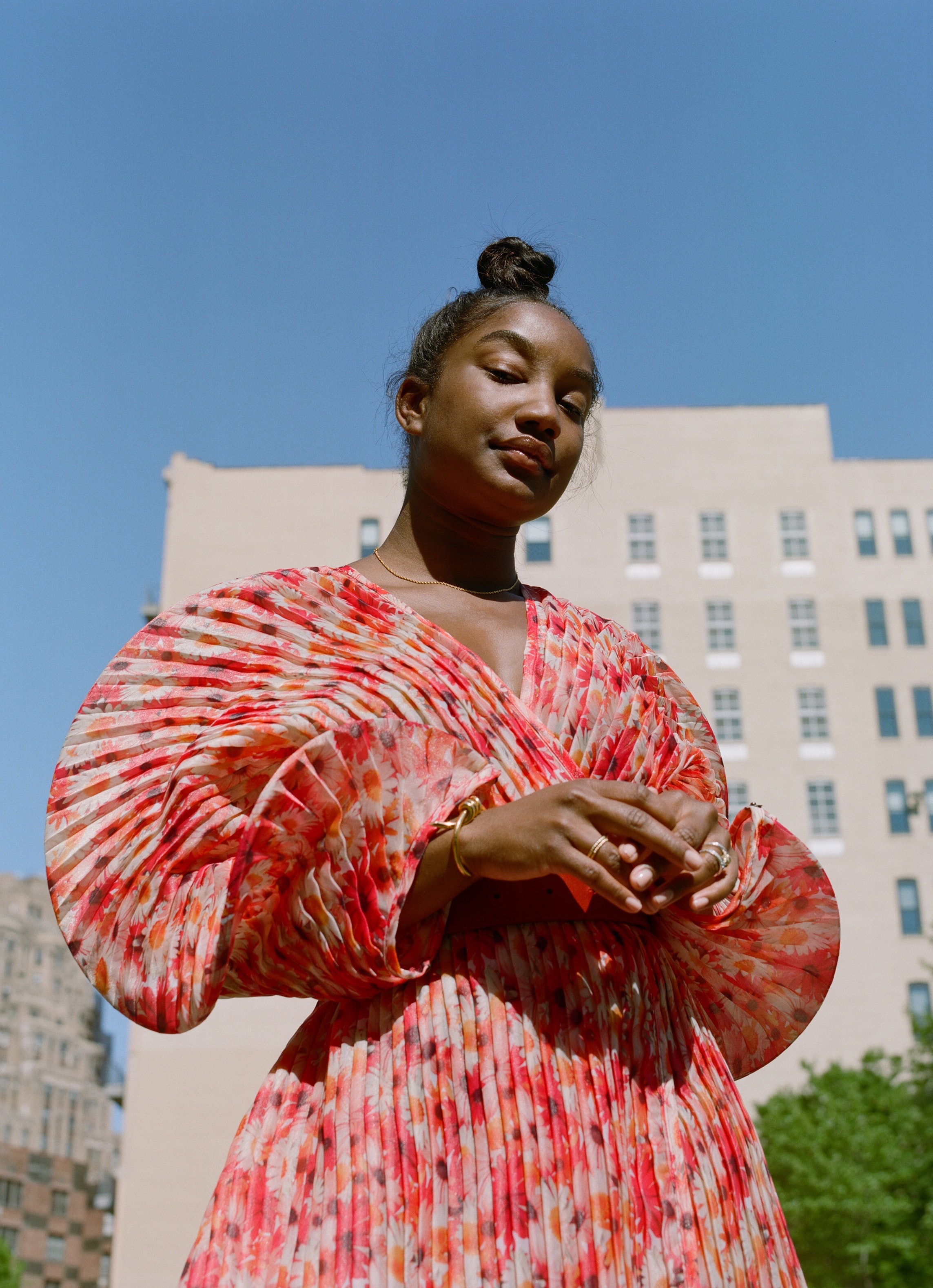 In July 2020, the entrepreneur Telsha Anderson had just opened her first boutique, T.A., in Manhattan’s Meatpacking District, and was fielding questions from fashion reporters about whether she’d be able to stay in business during a global pandemic. Today, Anderson’s store—a cool-kid shopping destination with aesthetics that approach Dover Street Market-levels of artistry—is thriving. And so is the businesswoman herself. Anderson, who grew up in New Jersey, will soon move into a new apartment in New York City, and is deep in planning her wedding to her fiancé, the costume designer Justin Boone. Much like her store, which carries contemporary brands like Gauntlett Cheng, Ottolinger, and Theophilio, Anderson’s plans for her upcoming nuptials are forward-thinking—even when it comes to bridal fashion. “I’m wearing a dress from Danielle Frankel that I don’t think anyone else has worn,” she tells me over Zoom from her parents’ home in Jersey. “I’m going to wear it the whole night, because I might change my shoes twice.” (One pair is by Tom Ford, another will be some shoes she “has [her] eyes on.” “And I’ll switch my hair up,” she adds brightly.

The 28-year-old got her start working in public relations as an influencer manager, then moved on to digital positions at Hypebeast, Food & Wine, and artist management at Atlantic Records. As of last year, she has struck out entirely on her own, embarking on an endeavor that’s proving to pay off in more ways than one. Below, Anderson discusses her shopping habits, business philosophies, and why her custom engagement ring is her most prized possession.

You talked in the past about operating your store based on experiences you’ve had in former workplaces. What were some of these experiences that made you think, This is what I want to do and don’t want to do when I start my own business?

I’ve had some great experiences, specifically at Hypebeast and Atlantic Records. I wanted to create the community those places have—people who were in the same place, but still able to have their unique perspective on things. I was the only Black woman on the fashion team at my previous PR job, and I was leaned on for finding influencers that looked like me, which was a double-edged sword. Of course, it’s exciting to bring on someone in that capacity, but by the same token, you’re like, I shouldn’t be the one “introducing” you to this “newfound” culture.

Why was it important for you to open a brick and mortar store? Why not just do e-commerce?

We do have an e-commerce site that launched before brick-and-mortar because of Covid, which was the opposite of what I wanted, hilariously enough. But opening a brick-and-mortar was important because of the experience customers and consumers still seek when it comes to shopping.

I do think people in your age group grew up shopping in person, and crave that experience.

I remember walking into a Limited Too and my mom being like, find what you want, make sure you speak to the customer representative, and if you need help with anything you ask, if you want to try something on, speak up and do it. Moments like that that were so empowering and so much fun.

Let’s get into the Style Notes questions. What was the last thing you purchased?

I got a black crocheted bucket hat from Memorial Day. I was wearing it this morning. I’m so excited to wear it to New York Fashion Week shows.

What is the most prized possession in your closet?

My engagement ring. Justin did it himself, and he did really well. I wasn’t involved in the design, but I think I might have mentioned in passing, “Oh, when I get married, I want something that’s out of the box and different.” He’s really close with the people from Hoorsenbuhs, and they had a Spinelli Kincollin collaboration—he took that ring and customized it.

What was your first major fashion purchase?

I was in Nordstrom with my mom five years ago, and I had just gotten my first credit card. I bought a pair of knee-high Via Spiga leather boots. I wore them all last winter. My mom was like, “Do you have any other shoes?”

I went to private schools until my junior and senior years, so I had to be wearing the dress code. When I went to public school, I got to wear anything I wanted. I was a cheerleader, so I wore my uniform everywhere I went. A lot of high-waisted jeans, so much Abercrombie—dear god. I was very preppy and inspired by Gossip Girl, Gilmore Girls and That’s So Raven, and I still am to this day.

What were the other kids wearing?

They were really preppy, too—they were wearing Polo or striped rugby shirts. During my junior and senior years, people were wearing baggy jeans and just getting into Jordans. I bought every pair of Jordans possible, and I sold them all except my Royal Blue Ones on Flight Club. I got, maybe, 150 bucks for them. When I got older, I was like, I should have kept these! When I started working at Hypebeast, I discovered StockX and I was like, are you kidding?! I could have made this much money?

Do you have a favorite fashion moment from pop culture?

Do you have a biggest fashion regret?

I used to wear glasses for no reason. I didn’t need them. But two of my friends had glasses and everyone in my family wore glasses except for me. I was like, this is unfair! They’re going on trips to Lenscrafters without me? Absolutely not.

Which friend or designer’s style do you admire the most?

I’m obsessed with Christopher John Rogers, and not just because I carry him in the store. I’m a stan. I screamed when I saw his work on Gossip Girl. I get his excited by his tailoring, by the textures, by his colors, how he puts things together, his styling. It’s done well from start to finish.

So many things—and Justin just told me to calm down with the shopping. First are the Margiela Tabi knee-high shoes with the little heel. Second, a pair of R13 platform boots that I really want, they’re done in their signature, rustic, distressed style. There are also these Dion Lee cargo pants with straps you can put over your waist, which is giving me ’90s Britney Spears. And there is this Wardrobe NYC wool double-breasted black jacket that I’ve been stalking for maybe two years now. Every time I have the money for it, it’s sold out everywhere. And then when I need to be reasonable and not spend my money, the opposite happens: it’s available.

What’s a dream brand you would love to carry at T.A.?

Rave Review, for sure. Also Chopova Lowena. I’m open to discovering new, beautiful, contemporary brands that I don’t know of yet, too. That’s always fun.