After Cassandra Siegenthaler’s mother died in June 2019, Ms. Siegenthaler, going through her things, found a tattered, threadbare wedding ring quilt from the 1930s tucked inside an antique cedar chest. “My mother’s family was estranged so I don’t really know a lot about the origins of the quilt, but I do know it was one of the only things from her mom that she had saved,” she said.

After seeing Lydia Morrow, a plus-size influencer and lingerie designer, model a jacket-and-shorts set sewn out of an old quilt on Instagram, Ms. Siegenthaler decided to send her family quilt off to a North Carolina seamstress who works under the name Emmy Ruth to be repurposed into a coat. “I wanted something that felt like a permanent hug from my mom all the time,” she said.

Ms. Siegenthaler is one of a growing number of people upcycling generations-old quilts into wearable garments. Emily Bode, a men’s wear designer, was an early proponent when she ushered in a renaissance for antique textiles with her homespun patchwork jackets and men’s wear oxford shirts circa 2018.

Designers like Loewe and Calvin Klein quickly followed, though high fashion has largely been reluctant to fully embrace the homespun. That, in turn, has encouraged many indie designers to upcycle heirloom quilts into cheerful, one-of-a-kind coats. 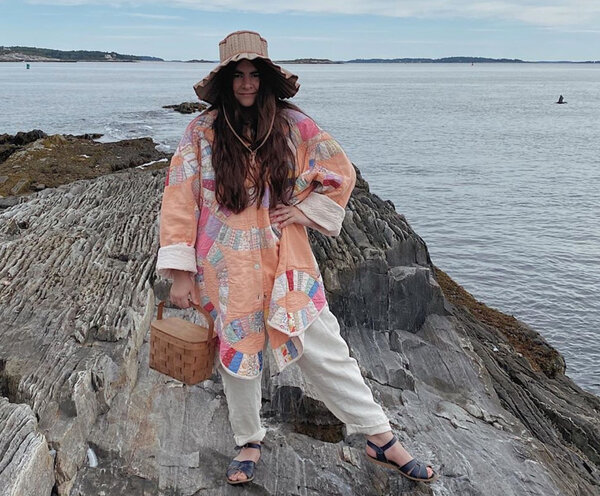 Brands like Psychic Outlaw and Farewell Frances offer “quilt drops” that sell out in minutes, and allow customers the option to send in their own quilts for a custom jacket. Some sell one-off coats and take commissions, like Taylor Randal of Softpaw Vintage, in Portland, Ore., and Emmy Ruth, though Ms. Ruth is not currently taking commissions, in order to keep up with demand.

Others, like Julie O’Rourke of Rudy Jude, have begun experimenting with quilt coats, documenting the process on Instagram, but have yet to offer up any for sale.

“I started making jackets for myself because I wanted a Bode one but couldn’t afford it,” said Rebecca Wright, the designer behind Psychic Outlaw in Austin, Texas. Ms. Wright sewed her first quilt coats in 2019, but it wasn’t until January 2020 that orders picked up significantly enough for her to leave her full-time job as a sewer at Eli & Barry.

Since January, Psychic Outlaw has hired 13 employees, including six full-time sewers, to churn out kaleidoscopic coats. After moving to Austin in May (from Denver), Ms. Wright has already moved house once, expanding operations from a two-bedroom apartment into a house with a garage.

Carly Scheck of Tappan, N.Y., founded Farewell Frances in January 2020, after both her grandmother and grandmother-in-law died within the same month. As for Ms. Wright, the quilt coats began as a personal project to honor the memory of her grandmother, a textile artist, but grew quickly thanks to customer demand. “There was something really cathartic” about creating something that felt like being with her grandmother again, she said. “When I made them and put them on, they transported me back to a time when I was a kid.”

As warm, inviting and friendly as these coats may seem, they have an underlying tension. Quilts are direct links to the past as well as emotional objects, imbued with the love and creativity of the person who labored to create them. Should they really be cut up and turned into coats?

“When you look at an antique quilt you are touching and feeling and making a connection with the hands of an artist,” said Lyric Kinard, an artist and quilt educator in Cary, N.C. If a quilt qualifies as a work of art, then cutting one up may be a form of sacrilege, akin to taking a ballpoint pen to the Mona Lisa.

“If it is done with love and respect and honor, then I think it’s fabulous,” Ms. Kinard said. But wearing a quilt coat without any knowledge of its origins contains echoes of appropriation. (Though “almost every culture in the world has some form of traditional textile work,” she said.) Part of what makes quilts special is their historical association with women’s labor and handiwork. Ms. Kinard thinks it’s important to understand the history and the value of these objects before brandishing the shears.

“I always double check, ‘Is this a quilt that should be in a museum even though I found it in a thrift store?’ A quilt can be very damaged and still be very valuable,” said Marty Ornish, a textile artist in La Mesa, Calif. who has been making gowns out of “dead quilts” — a term for quilts that have been discarded by their original owners, though Ms. Ornish prefers the term “abandoned” — since 2015.

Quilts are one of the most profoundly emotional, comforting, warm, spirited things on the planet,” said Becky Caulford, who designs quilt coats under the label Honeybea in Toronto. Ms. Caulford has a habit of anthropomorphizing quits in casual conversation because she believes each one has a soul, and refers to her work salvaging old quilts as “a very spirit-guided process.”

Few designers will deign to cut up a mint quilt, instead choosing to source damaged quilts salvaged from recycling plants and thrift stores to make their wares. “I call it quilt rescue,” Ms. Wright said. “I don’t buy any quilts that are not ready to be something else.” To compensate, Ms. Scheck has even started producing quilts out of vintage linen sewn by women in Haiti in order to put more quilts back on the planet.

Though the rustic jackets are inarguably de rigueur, there’s a whiff of paradox to them (along with, sometimes, a whiff of must). Quilts are meant to be treasured forever, surviving fleeting trends. And because each coat is made from a painstakingly handcrafted antique, it is by definition not reproducible on a mass scale.

“It’s amazing to see them everywhere all of a sudden,” Ms. Siegenthaler said. “But I do think it will plateau and then the die-hard, weirdo, cottagecore people will keep wearing their quilt coats well into their old age.”