Grey’s is a show so jam-packed with action and drama, sometimes it can be hard to notice the tiny details in the show. Nobody can blame you for that — chances are you’re too focused on the life-altering surgery or latest love triangle on the horizon to notice things like the song playing in the background or a name written on the wall. But rewatching past seasons can help you notice the little things — those Grey’s Anatomy easter eggs even the biggest fans may not have noticed. So, keep in mind how dedicated the shows’ writers are during your next rewatch, and see if you can spot these hidden gems.

Since the series has been on the air for more than 300 episodes, there is plenty of content from the past that writers can pull from when writing new scenes. That’s where a lot of those easter eggs come from; iconic moments, quotes, and scenes from previous seasons are repurposed into new material.

Another way the writers throw easter eggs in is by incorporating important names slyly throughout the series, in a way that’s so low-key, viewers probably don’t even notice.

Of course, there’s so much more to discuss, so here are 16 nuggets hidden in plain sight within Grey’s Anatomy. 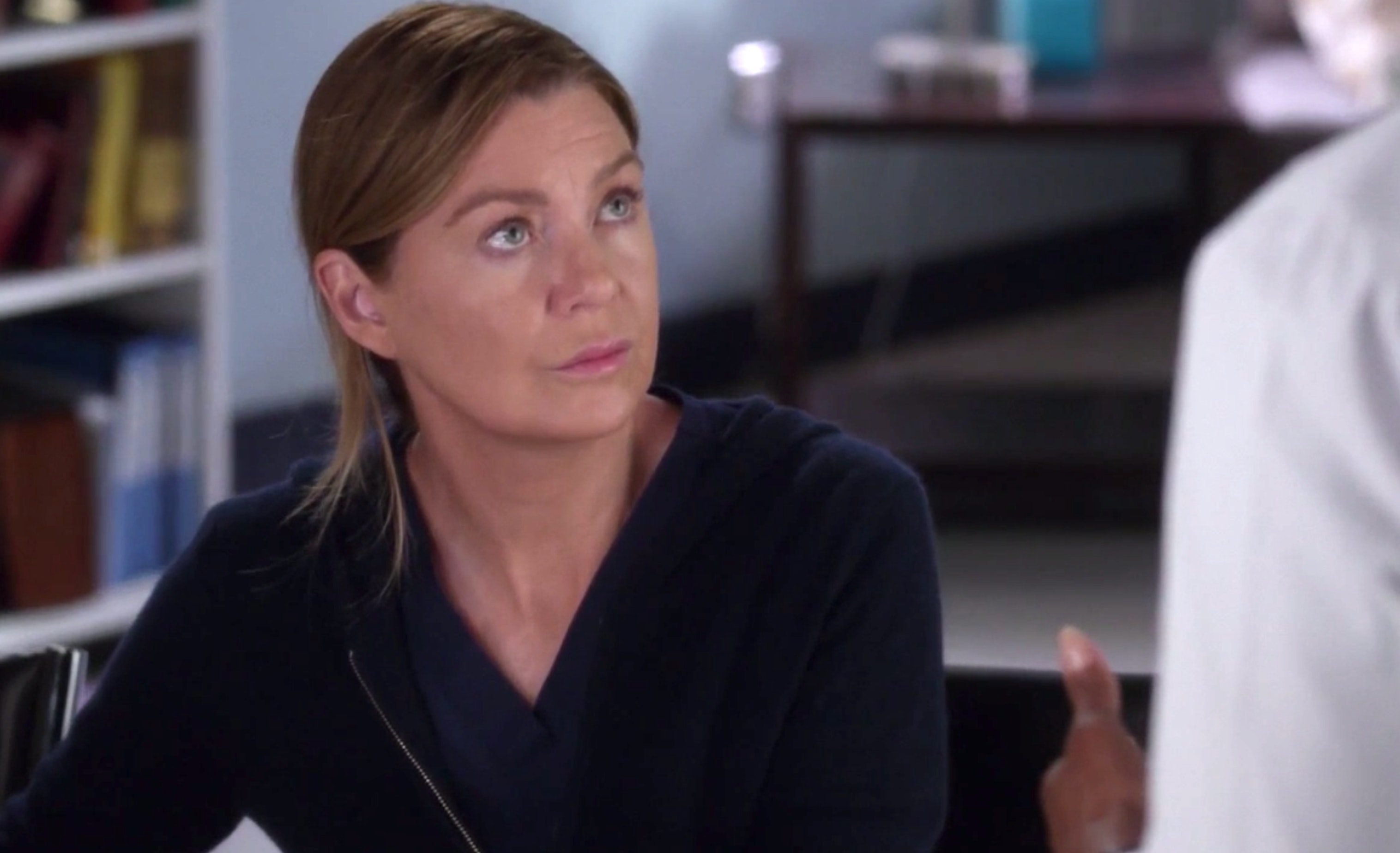 1. Every Episode Of Grey’s Anatomy Is Named After A Song

From the series premiere (titled "A Hard Day’s Night"), every episode title shares the name of a song.

There was one exception to this rule, however. The original title of Season 14, Episode 1, "Four Seasons in One Day," was changed to "1-800-799-7233," the phone number for the National Domestic Violence Hotline, since the episode dealt with Jo Wilson’s abusive ex.

2. Songs Reappear In The Series At Meaningful Times

In Season 4, Episode 14, Cristina sang "Like a Virgin" in the hospital’s morgue when Burke left her. Then in Season 10, Episode 22, the same song played in the background when Burke offered Cristina a job at his hospital in Switzerland.

Similarly, the first song played on the show, "Portions For Foxes," returned at the end of the 300th episode, after Meredith won a Harper Avery Award — representing a perfect full-circle moment for her.

When Meredith told Cristina she was getting married to Derek, Cristina wanted to make sure she gave her pal something old, something new, something borrowed, and something blue — to keep with tradition. In typical Cristina fashion, the gifts were a bit cheeky. She gave Meredith an old shopping list on a new sticky note, and let her borrow her favorite pen (which was blue).

Meredith and Derek later used that pen and sticky note to write their vows. 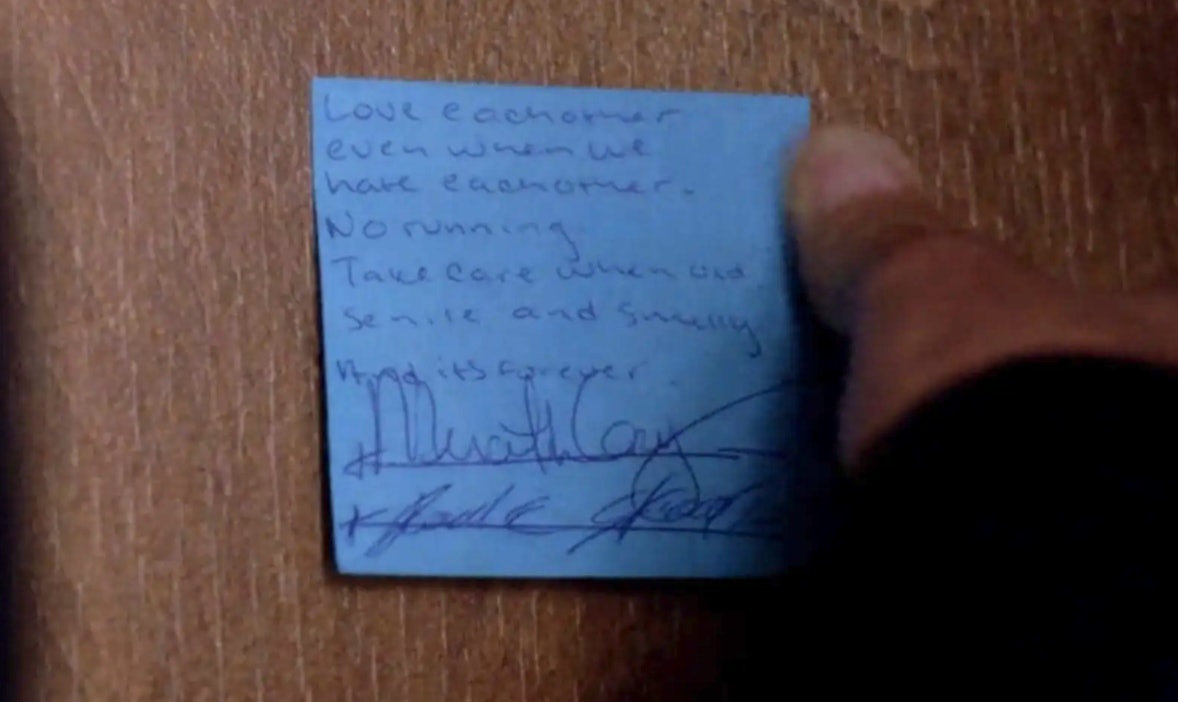 Their names were: Meredith, Alex, George, Izzie, and Cristina.

5. George Foreshadowed His Own Death

In the pilot, George asked, "We’re going to survive this, right?" Ironically, he was the only one of the original interns who died in the series… so far.

6. Izzie’s Dog Posters Were Up For 10 Seasons 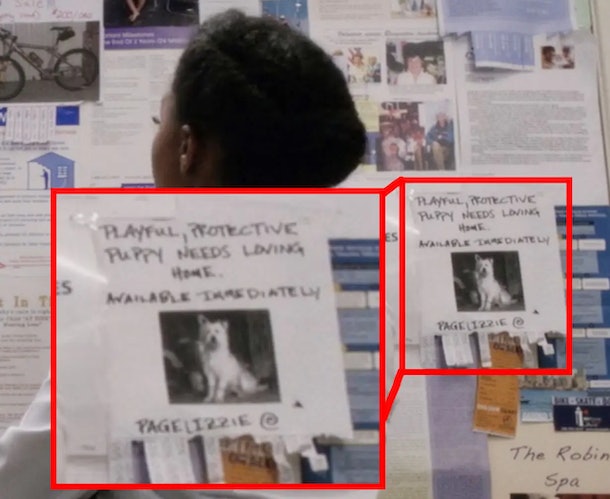 In Season 2, Izzie tried to give away her dog, Doc, by posting flyers in the hospital that said: "Playful, protective puppy needs loving home. Available immediately. Page Izzie."

Although Izzie made her final appearance in Season 6, one of her posters was still hanging in the hospital in Season 12.

7. Lexie Told Mark How To Console Her While She Died

In Season 5, Episode 13, Lexie comforted Mark while he was in the hospital. "I’m now going to climb into bed with you and stroke your hair because that’s what I like to have done for me when I’m hurt," she said.

When Lexie died in Season 8, Episode 24, Mark stroked her hair, just like she taught him to.

In Season 6, Richard visited a café called The Rhimes Café. The name is probably not a coincidence, since the show’s creator is Shonda Rhimes.

9. Clothing Items Of The Dead Reappear

Grey’s is sentimental on many occasions, particularly when it comes to clothing items. Izzie wore the sweater she knitted for Denny while she was grieving his death. Similarly, Meredith always wore Derek’s nautical patterned scrub cap after he died in Season 11.

Derek told Meredith in Season 1, Episode 2 that he’d want his four sisters by his side if he was in a coma. It’s understandable, then, why Amelia was so upset at Meredith for unplugging Derek in Season 11, Episode 24, because she did so without letting all his sisters be there to say goodbye.

11. The Company That Owned The Plane That Crashed In Season 8 Is Still Running

In Season 8, Meredith, Derek, Cristina, Arizona, Mark, and Lexie were left stranded in the woods for four days after their plane crashed, and Lexie died before help could get to them. In Season 9, Episode 7, it was revealed the airline they were on was called Sky Trip Express, which "had a history of mechanical issues."

Since Meredith was in that crash (that also killed her sister), it’s surprising then to see her hop on a Sky Trip Express flight in Season 13, Episode 20. 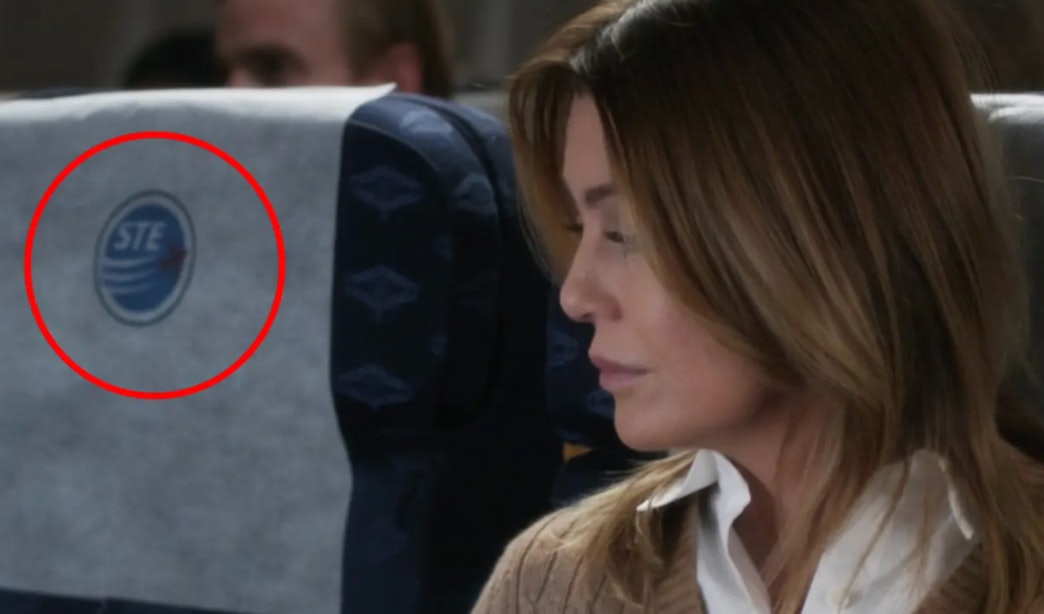 12. The Names Of The Crew Members Are Slipped In Throughout The Show

The operating room schedule occasionally lists crew members as some of the "doctors" scheduled for surgery. For example, in Season 13, the board listed "Guzman, A" and "Brodo, D" as anesthesiologists scheduled for surgery. Austin Guzman was a writer and producer on Grey’s, and Daniel Brodo was a set dresser.

Another time a crew member’s name was slipped in is when Cristina read in the paper that her ex, Preston Burke, had won the prestigious Harper Avery Award. The byline of that newspaper article listed Tony Phelan, who was a writer and producer on the show.

Fans love Bokhee, as she’s starred in 221 Grey’s episodes as a scrub nurse. What many fans don’t know, though, is that she’s actually a surgical nurse in real life, which makes the operation scenes all the more legit.

In Season 16, Episode 21, Amelia had to give birth without Link, since he had to scrub in for surgery on Richard Weber. Luckily, Bailey was there to help her through it all. At one point, she hopped behind Amelia to coach her, and the scene looked pretty familiar.

The way Bailey was holding Amelia was the same way George held Bailey when she was going through labor in Season 2, Episode 17.

15. Karev Almost Wasn’t On The Show

Fans likely missed the CGI character in the series’ pilot, but yeah, Justin Chambers did not originally shoot Episode 1 with everyone else. Alex Karev was CGI’d into the episode after it was filmed. Apparently, writers thought they needed another male to offset the shyness of George.

While there are plenty of hidden gems included throughout the show, Episode 300 takes the cake when it comes to easter eggs.

For example, three patients in the episode were obvious doppelgängers of George, Cristina, and Izzie. They even wore clothing similar to the original characters in the pilot episode (George wore a brown coat, Cristina wore a leather jacket, and Izzie wore a purple top). 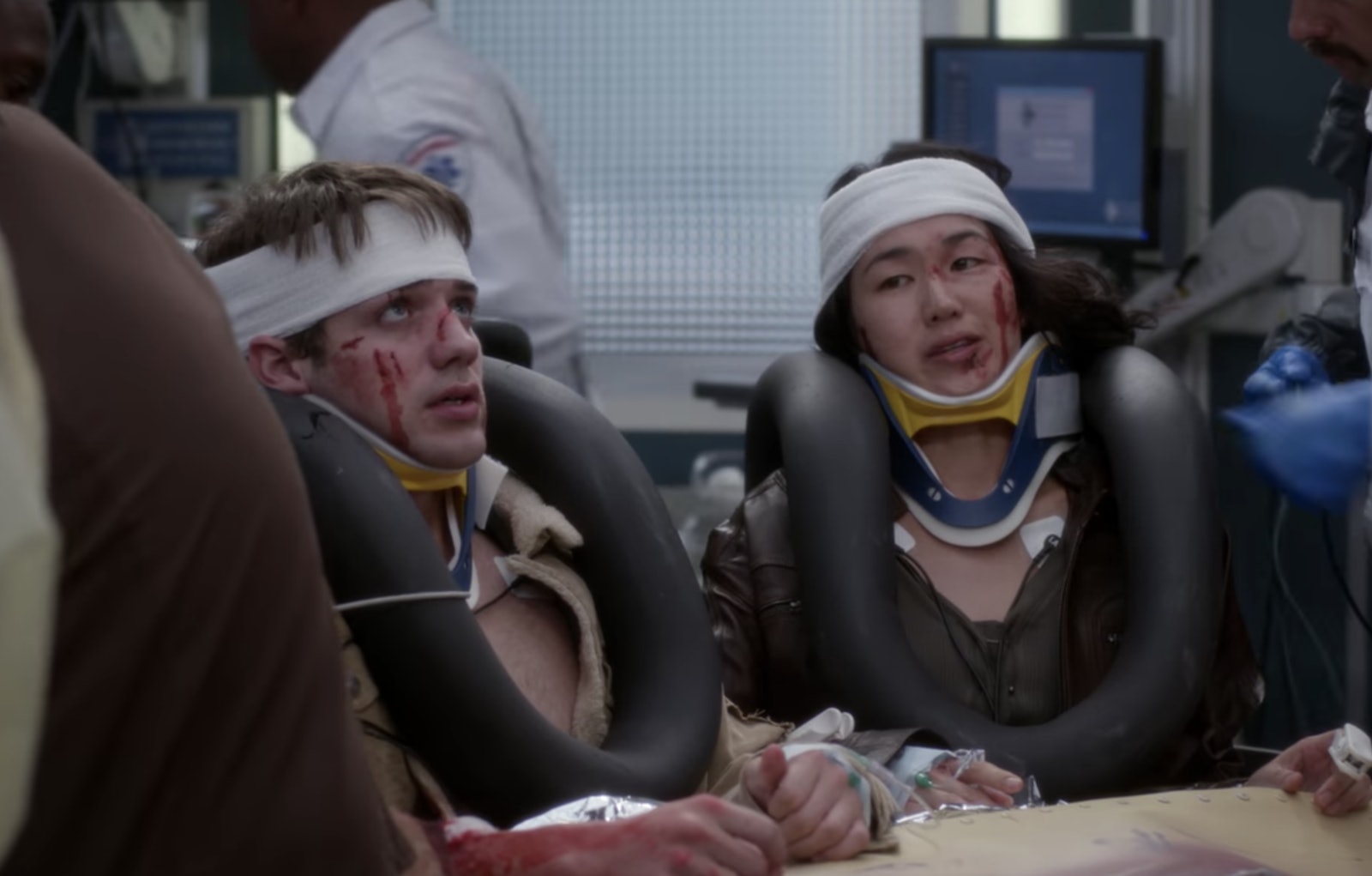 Episode 300 also paralleled the Season 2, Episode 6 plot (in which two strangers were impaled by a pole) except this time, two patients were stuck in a rollercoaster. 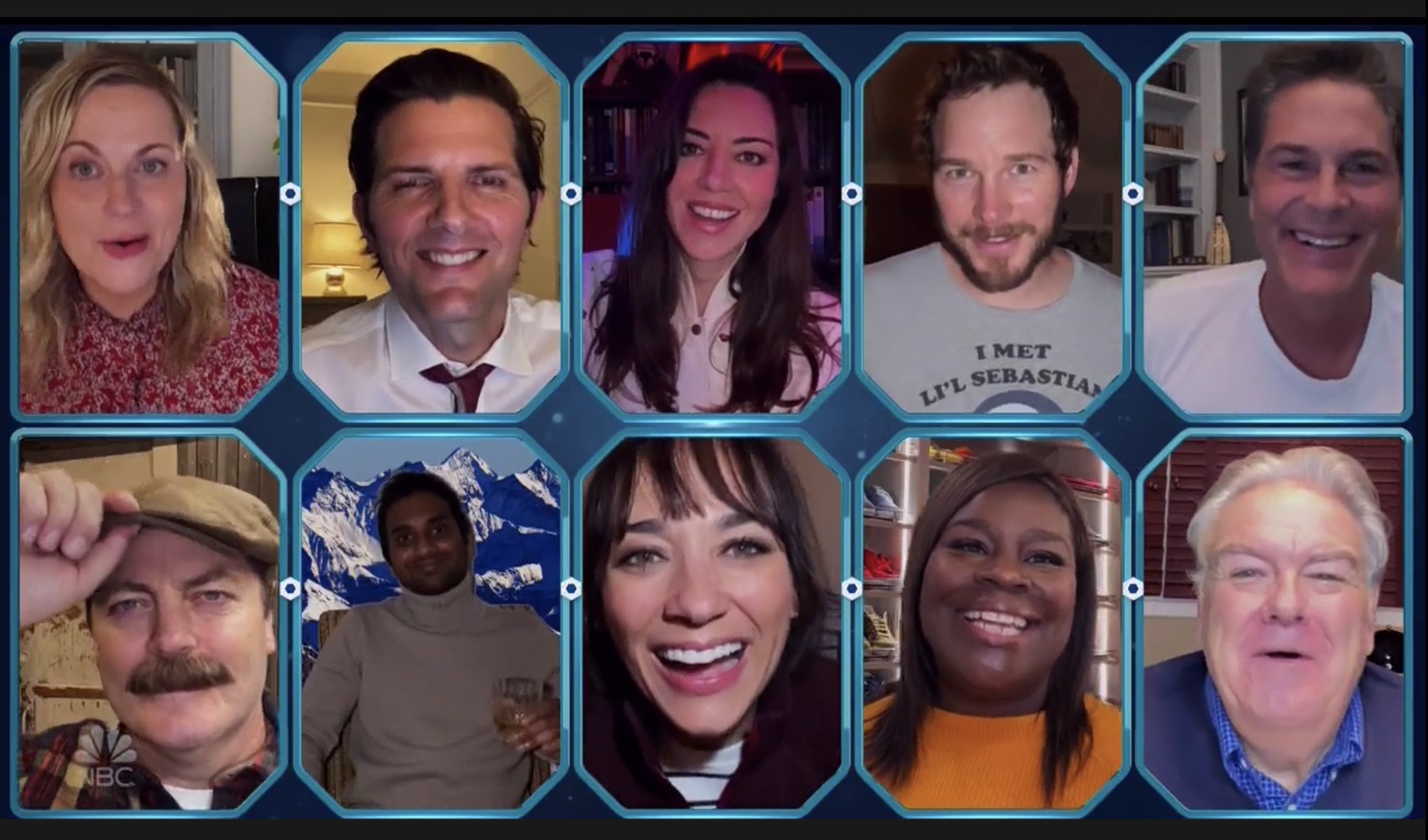 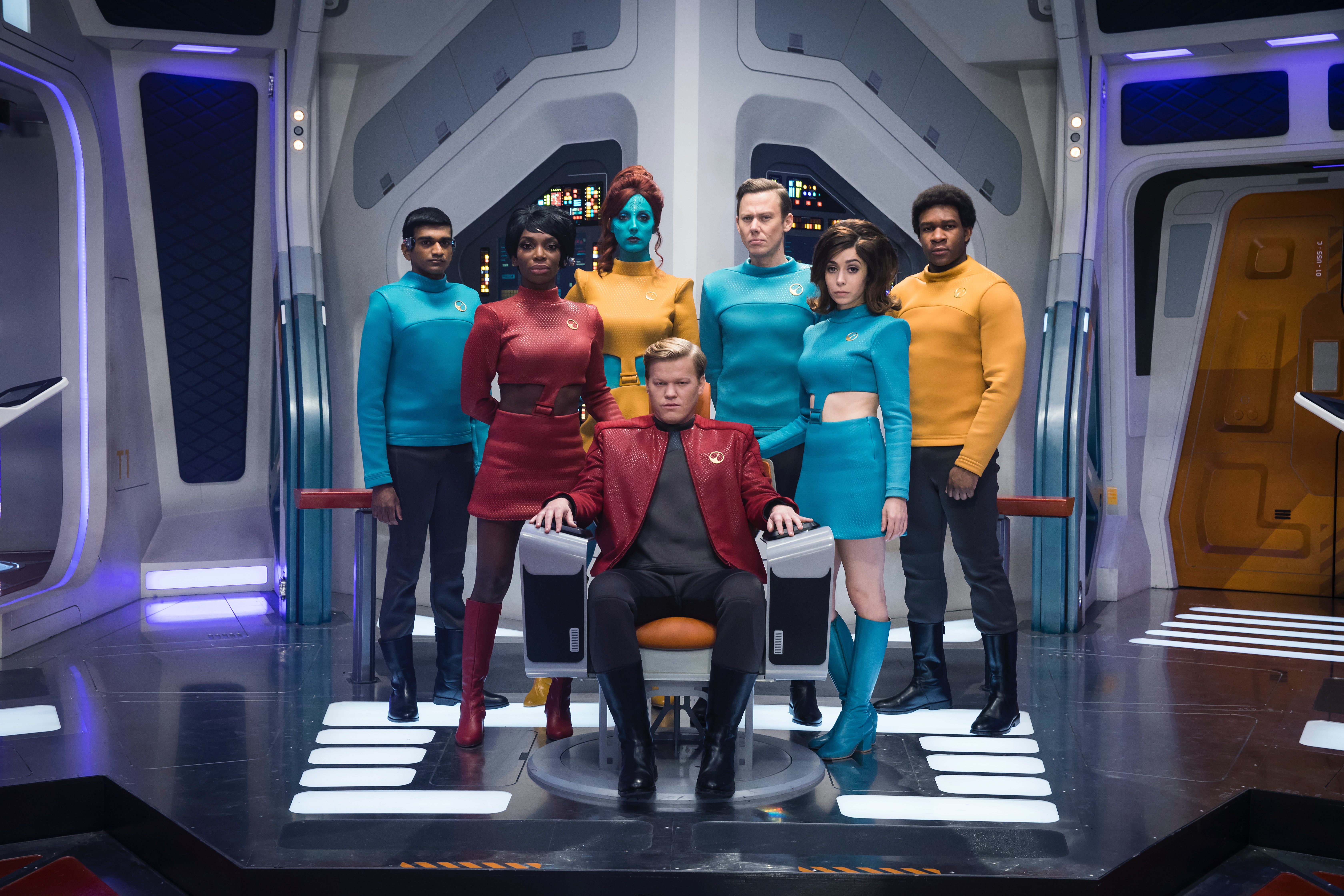 Do Kiara & JJ Get Together On ‘Outer Banks’? This Theory Has Fans Convinced