Everyone’s bud! Emily Hampshire won over fans for her role as the edgy, but lovable Stevie Budd on Schitt’s Creek. What the 39-year-old actress took from the show’s set and how she feels about her former costars, however, is what makes her Us Weekly’s woman crush!

“Stevie, she sits behind a desk [on the series] and behind her is a giant painting of a stag. I took that home,” Hampshire exclusively told Us of her memorabilia haul. “I put it in my 500-square-foot condo in Toronto and it basically takes up the entire place.”

The Canada native also brought home “a lot of little things,” including a book that “Mr. Rose gave me signed” when the show wrapped in 2020. “I took the comment cards [from the Motel],” she added. “I’m going to start to cry. I took my Tamagotchi, my dead Tamagotchi.” 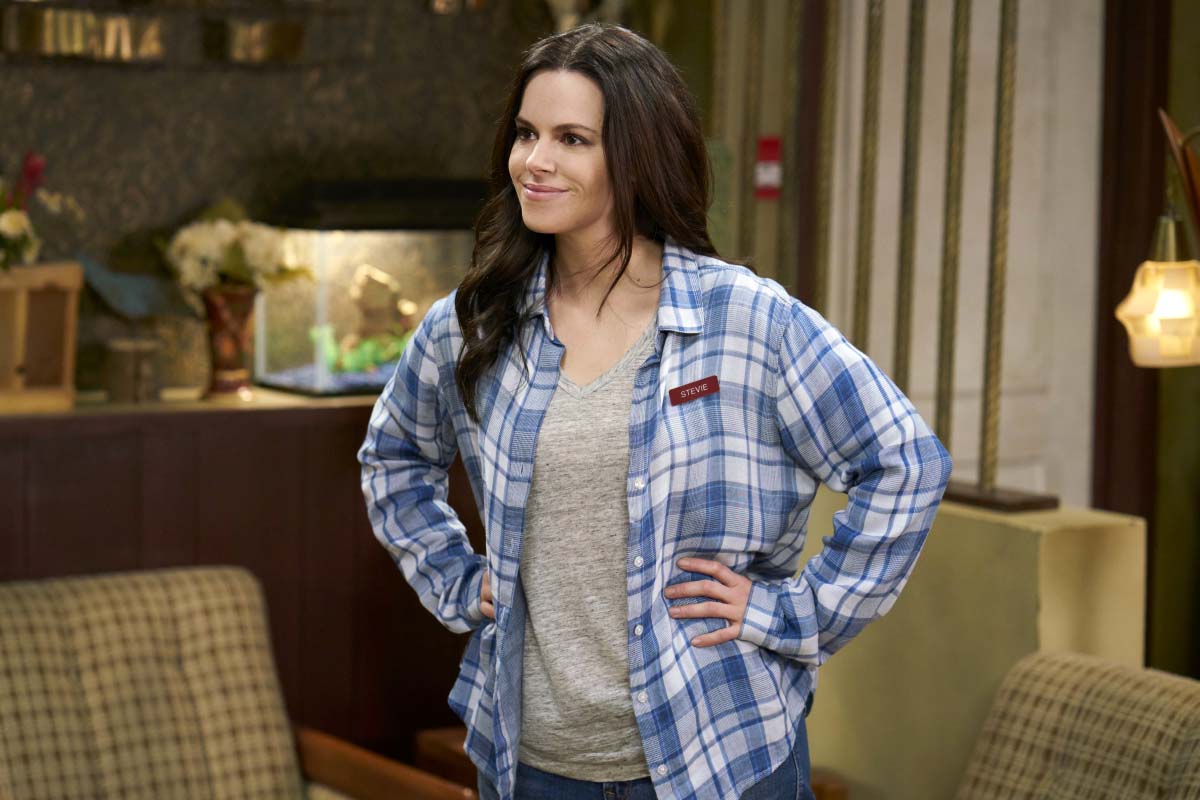 While Hampshire’s empowering outlook on self-love and how she embraces the LGBTQ+ community has Us crushing on her, the 12 Monkeys alum told Us that she looked to costars Eugene Levy and Catherine O’Hara as her career crushes.

The Chapelwaite star called O’Hara, who played Moira Rose on the comedy, “so warm” and “so lovely.”

“They were so generous with us. It was Annie [Murphy]’s first big show and they treated us all like equals,” Hampshire added. “We all collaborated together on the same level. There was no hierarchy, which is rare on a show. They have every right to be, like, king of the castle, [but were] never like that. So, that’s definitely what I take away is just their work ethic.”

Scroll down for five reasons why Hampshire is Us’ woman crush!

1. She’s an Advocate for LGBTQ+ Acceptance

The actress, who identifies as pansexual, pointed to Queer Eye’s Carson Kressley as someone she looked to during her coming out journey. “There’s always somebody who paves the way to make somebody else’s path a little easier,” she said. “The power of coming out is that you become human. I think the more there is visibility like that, and the more it’s normalized — when you no somebody then you see the human in them.”

2. She’s All About Self-Love

3. She Wants Everyone to Be Their Authentic Self

The Rig star revealed she was empowered by being on Schitt’s Creek, especially since the show’s LGBTQ+ story lines really resonated with so many fans. “To actually be part of something that does affect people in a real, real way is, well, it’s just hard to do anything less than after,” she said. “The one [letter] that really struck me was the one we got from — I think they’re called something like a thousand moms or something. It’s about all these moms with LGBTQ+ kids. The letter is just, like, I mean, if you watch the [show’s] documentary without crying, you’re a monster.”

Hampshire looked to comedic legends O’Hara, 67, and Levy, 74, when learning how to treat others on set. “Eugene and Catherine, like, were the people who if you allowed someone to give you coffee, instead of bringing the entire crew coffee, you were a diva,” she told Us. “They’re good people. And I found that in my career that the best of the best are just good people.”

5. She Prioritizes Her Friendships

The Never Saw It Coming actress connected with her comedy costars just as much as fans did. “One thing that we get from people all the time [is that the show] felt like family and it affected them. The same thing happened to us,” she said. “We genuinely really like each other, like, a lot. I miss most the people.”

With reporting by Mandie DeCamp