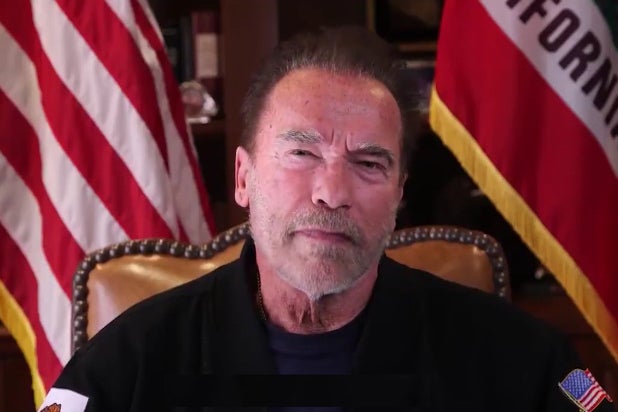 Arnold Schwarzenegger released a cautionary plea to the American public Sunday, comparing it to Nazi-occupied Germany and sharing his own childhood experiences in post-World War II Austria to warn against what happens when everyday people buy into leaders’ “lies and lies and lies.”

The former California governor compared Wednesday’s Capitol riot carried out by Donald Trump supporters and his attempts to overturn the election with Kristallnacht, one of the first violent outbreaks against Jews in Europe that lead-up to the Holocaust. Schwarzenegger, a Republican, blamed Trump directly for the insurrection, while also castigating lawmakers in his party for their “spinelessness” for supporting him.

“I grew up in Austria. I’m very aware of Kristallnacht, or ‘the Night of Broken Glass,’” the actor said in a Twitter video that went on for more than seven minutes. “It was a night of rampage against the Jews carried out in 1938 by the Nazi equivalent of the Proud Boys. Wednesday was the Day of Broken Glass right here in the United States. The broken glass was in the windows of the United States Capitol.”

He went on to share that his father and numerous men in his community were so damaged — physically and mentally — by their participating in World War II and the events surrounding it that they drank to excess and hit their own children. Schwarzenegger said he did not fully blame his father for those actions, which he pointed out he rarely speaks about. Instead, he said, he blamed leaders who preached “lies” and “intolerance” to lure in “the people next-door,” not necessarily just overt anti-Semites.

“President Trump sought to overturn the results of an election, and of a fair election. He sought a coup by misleading people with lies,” he continued. “My father and our neighbors were misled also with lies and I know where such lies lead. President Trump is a failed leader. He will go down as the worst president ever. The good thing is he will soon be as irrelevant as an old tweet, but what are we to make of those elected officials who have enables his lies and his treachery? I will remind them of what Teddy Roosevelt said: ‘Patriotism means to stand by the country. It does not mean to stand by the president.’”

The “irrelevant as an old tweet” dig was particularly cutting, given that Friday night Trump was permanently banned from the platform, which was his preferred means of communication.

Former CIA director John Brennan dubbed Schwarzenegger’s video “powerful” and “poignant.” Historian Ruth Ben-Ghiat said the clip was worth watching because it provided a “blend of historical testimony about the ravages of Nazism and the urgent call to act to protect our own democracy.” Conan O’Brien, film writer Ed Solomon and actress Lea Thompson urged their followers to watch, as well.

See his entire video, in which he ultimately calls for unity and wields his “Conan the Barbarian” sword, below.