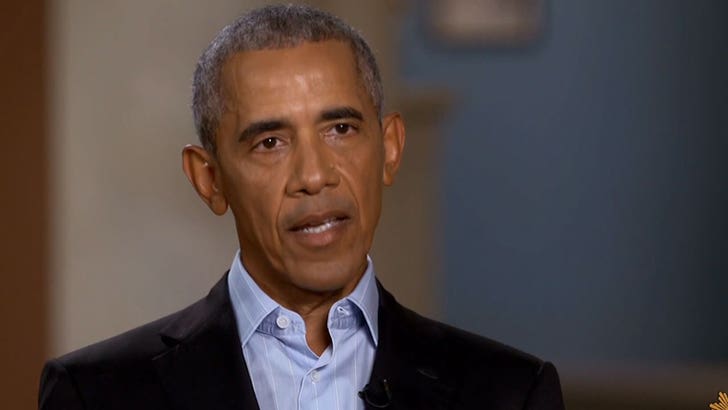 Barack Obama did not want to hit the campaign trail — it’s not really something former Presidents do — but he felt it was necessary because Donald Trump‘s tenure “was not normal.”

Forty Four appeared on CBS’s “Sunday Morning” with Gayle King. He made it clear, he didn’t really want to stump for the Dems, but he said, “I think we were in a circumstance in this election in which certain norms, certain institutional values that are so extraordinarily important, had been breached – that it was important for me, as somebody who had served in that office, to simply let people know, ‘This is not normal.'”

Obama framed the current American dilemma this way … “It’s very hard for our democracy to function if we are operating on just completely different sets of facts.”

He’s sure got a point … the reality is that most Americans now select media that parrots their own views — especially if it’s skewed — and they distrust media that takes the opposing view. So, both sides get lopsided news.

The former Prez also obliquely addressed criticism, that he didn’t do enough for Black America, saying, “I think a lotta people expected, ‘Well, we got this young, progressive president. And now suddenly we’re gonna eliminate inequality and, you know, we’re immediately gonna have universal health care. And we’re gonna have climate change legislation, and immigration reform, and criminal justice reform,’ and all the things that I wanted to get done. But what I understood very early on is, the federal government, headed by the president, is an ocean liner; it is not a speedboat. Ten years from now, 20 years from now, the work you’ve done may be appreciated as having been good and helpful. But at the time, it can feel like, ‘Wow, this isn’t happening fast enough!'”

Obama, who was promoting his new memoir, “A Promised Land,” shrugged off King’s question of whether he’ll help Biden, saying, “He doesn’t need my advice. And I will help him in any ways that I can. But now, you know, I’m not planning to suddenly work on The White House staff or something.”

To which Gayle said, “No cabinet position for you, Mr. President?” His response — “There are probably some things I would not be doing, ’cause Michelle would leave me … She’d be like, ‘What? You’re doin’ what?'”