Update for everyone invested in Cody Simpson and Miley Cyrus’ post-split relationship: The Daily Mail reports that Cody has unfollowed his ex—but let’s take a quick breath for a moment.

While it’s true that Cody does not currently follow Miley… 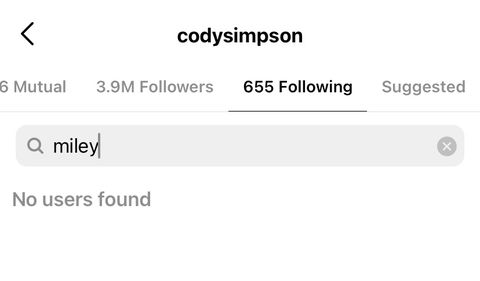 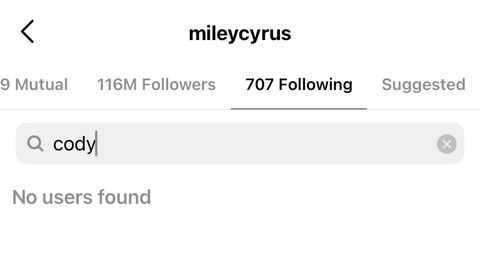 There’s no indication that they aren’t still friends away from social media. Like, sometimes people simply don’t follow each other! It’s fine! That said, The Daily Mail reports that Cody’s unfollow comes amid him going public with his rumored new girlfriend Marloes Stevens—who he was recently photographed getting cozy with.

For what it’s worth, Miley and Cody have been friends forever, and it seems doubtful that a breakup could change that. As she herself said during an Instagram Live, “We are just deciding who we wanna be in our lives, what we wanna do, and so don’t make it some drama story if next week we’re hanging out, getting pizza…We’ve been friends for 10 years and we’re going to continue to be friends, so just don’t make it something that it is not.”

In that same Insta Live, Miley said “no one is reliable in a relationship except the individuals who are participating in it,” which is probably important to keep in mind before worrying TOO much about an unfollow.