Dorit Kemsley feels for Hilaria Baldwin. The Real Housewives of Beverly Hills star expressed her support for Baldwin on her Instagram Story on Saturday, saying she relates to how she must be feeling after being criticized for her own accent.

“I feel bad for what she’s going through at the moment. I don’t think she deserves it,” Kemsley wrote in response to a question about Baldwin, who has been accused of exaggerating her Spanish accent and her connection to Spain.

“I’ve had so much scrutiny over the way I speak, I’ve learned to ignore all the noise but at first it was really hurtful. I’m sure all of this backlash has been hard on her,” Kemsley continued. “I don’t know her but I’ve followed her for years and I hope she’s back on social media soon. I would love to see less trolling and bullying on social media in 2021. If you have nothing nice to say, don’t say anything at all.” 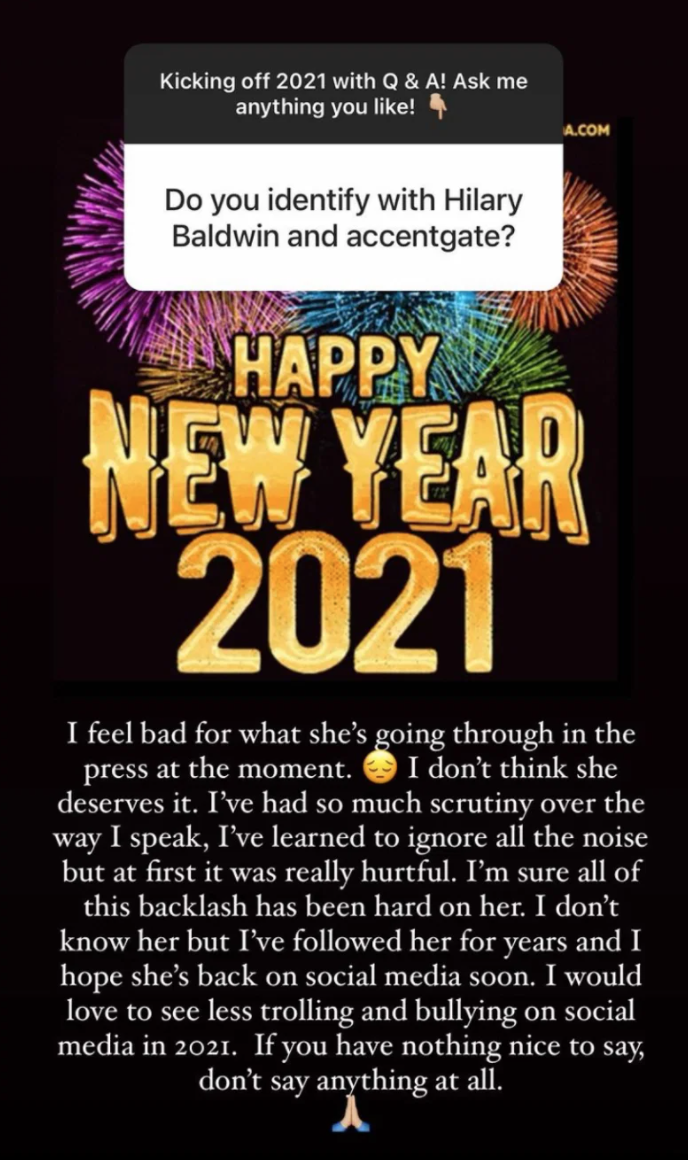 Kemsley, who is from Connecticut, addressed her slight British accent in a 2017 interview with The Daily Dish.

“I think the way I speak is probably a combination of many things. First and foremost, I am married to a Brit who’s got a very, very strong London accent, and I’m sure some of his inflections have sort of rolled over on me,” she said. “My parents are not American. I was born and raised in America. I did spend a significant amount of time, nearly 10 years, back and forth going to Europe, I spent a lot of time working all over the world and in various places of the world where people didn’t speak English all that well.”

Baldwin, who was born in Boston with the name Hillary Hayward-Thomas, addressed the controversy over her heritage, accent and name change last week.

“There is not something I’m doing wrong, and I think there is a difference between hiding and creating a boundary,” she told the New York Times, explaining that she spent time in Spain and her accent fluctuates depending on how nervous or excited she is.

See more on Baldwin in the video below.