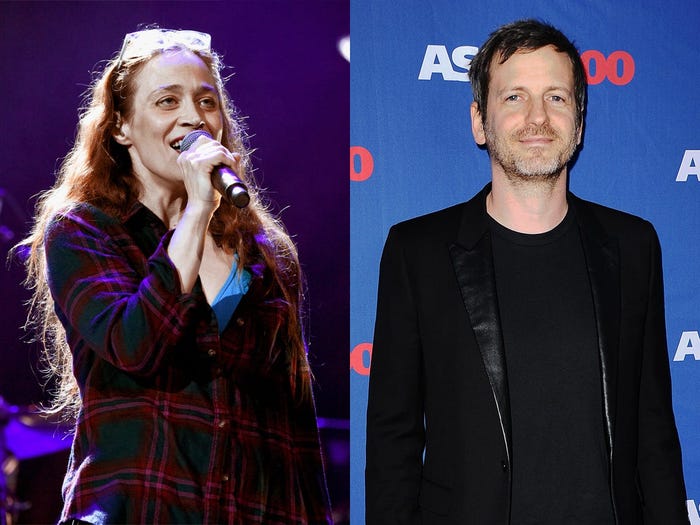 "I'm bringing up the Grammys and that's really something that I shouldn't be doing," Apple said during a recent interview with The Guardian, "but really, Dr. Luke is nominated? They had [Kesha] up there singing 'Praying' and now they're gonna go: 'Oh but it's Tyson Trax!'"

In 2014, Kesha sued her longtime producer, claiming he "sexually, physically, verbally, and emotionally abused [her] to the point where [she] nearly lost her life." Kesha sought to void her contracts with Dr. Luke and eventually dropped the lawsuit in 2016.

During the Grammys ceremony in 2018, Kesha delivered a powerful performance of "Praying," a song that's widely interpreted to be about Dr. Luke's alleged abuse. She was joined onstage by a group of female singers, all symbolically wearing suffragette white.

Dr. Luke has denied Kesha's allegations and is currently suing her for defamation and breach of contract. He has continued to produce music for artists, including Doja Cat, Kim Petras, Saweetie, and DaBaby.

Apple was nominated for three Grammys this year, including best rock album for "Fetch the Bolt Cutters."

Her single "Shameika" is also up for best rock performance, a category that has all-female nominees for the first time ever — though she said she isn't sure whether she can "go there and support it," referring to the ceremony being held at the Staples Center in Los Angeles on January 31, 2021.

"I immediately had this feeling: I wish I was in a room with these ladies and we could celebrate. I felt really nice for a second," she told The Guardian.

"Every week I send a selfie to Simon, who runs the Tumblr site on me," she continued. "I thought, for that week's selfie, I'm gonna make a T-shirt with everybody's names in little hearts: Phoebe [Bridgers], Brittany [Howard], Danielle, Este, Alana [Haim], Adrienne [Lenker, Big Thief], Grace [Potter]. But then I threw it away. I felt like this is exactly what they want me to do: 'It's better now! I got nominated! And it's all women this year and the Grammys are great!'"

"I keep going back to them putting Kesha on stage like, 'We believe you' — and I believe her — then two years later, f—ing Tyson Trax."

The singer even said she considered boycotting the awards, asking her fellow female nominees to join her.

"I don't know if anybody who's nominated can help having the thought: What would I do If I won? My vision was that I would just get up there with a sledgehammer and I wouldn't say anything, I would take the Grammy and smash it into enough pieces to share and I would invite all the ladies up," she said.

"My second thought was I wonder if I can get all these ladies to boycott this s— because of Dr Luke."

Representatives for the Recording Academy and Dr. Luke didn't immediately respond to Insider's request for comment.