A star-studded cover version of the Foo Fighters track Time Like These has knocked Colonel Tom Moore off the top of the UK charts.

Proceeds from the single in the UK will be split between Comic Relief and BBC Children In Need. 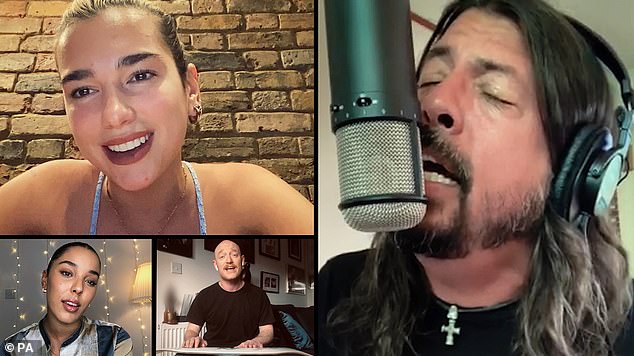 Number one: A BBC Radio 1 Live Lounge cover of the Foo Fighters track Times Like These feauring Dua Lipa and Dave Grohl has claimed number one this week

The last time a charity single replaced another charity single at number one was in November 2014, when Children In Need’s single Wake Me Up by Gareth Malone’s All Star Choir was dethroned by Band Aid 30’s Do They Know It’s Christmas?

Last Friday, Colonel Tom Moore became the oldest person to have a No.1 single after his duet with Michael Ball reached the top of the UK charts.

Their version of Liverpool’s anthem You’ll Never Walk Alone also became the fastest-selling single of 2020 in the wake of the hero’s incredible fundraising efforts for the NHS. 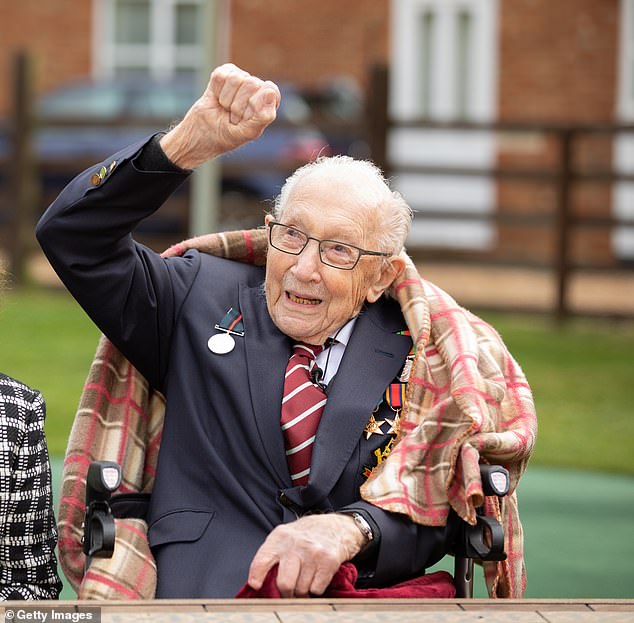 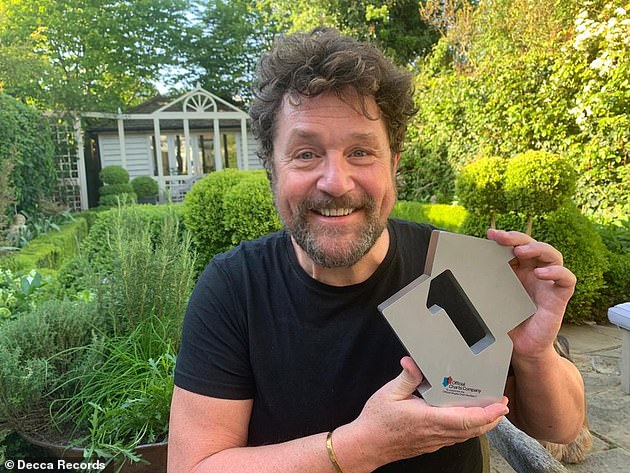 Top of the charts! It was also the first time that Michael has ever managed to bag a No.1 single 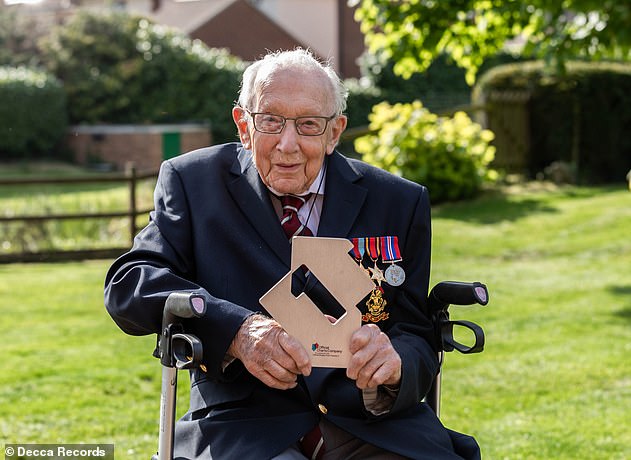 Champ! The duet’s version of the Liverpool also became the fastest-selling single of 2020 as it raced to the top of the charts

The charity single dropped to number 21 in the charts this week.

According to the Official Charts Company, Times Like These rose from number five with 66,000 chart sales this week, 78 per cent of which were downloads.

The track was locked in a close battle with The Weeknd’s Blinding Lights, which finished at number two, 3,000 chart sales behind.

Times Like These debuted on BBC Radio 1 and the star-studded music video aired during BBC One’s The Big Night In. 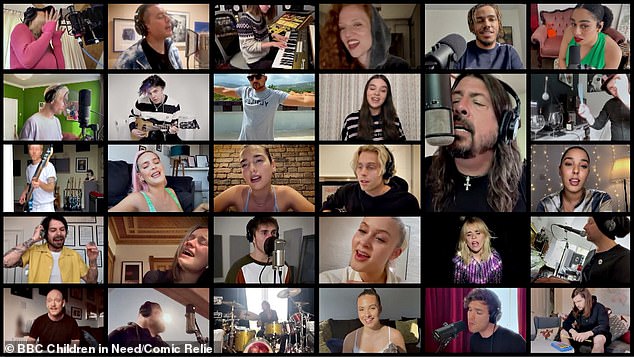 Out in force: Times Like These debuted on BBC Radio 1 and the star-studded music video aired during BBC One’s The Big Night In

It is also the first Foo Fighters song to reach number one in the UK.

Lipa told BBC Radio 1: ‘I was really emotional when I saw the final video with all the artists and hearing everybody come together. I’m so happy that we could come together to try to support a better cause.’

Foo Fighters frontman Dave Grohl said: ‘Humbled, with so much love for all my fellow artists and listeners. Please remember to support and donate to Comic Relief and Children In Need.’ 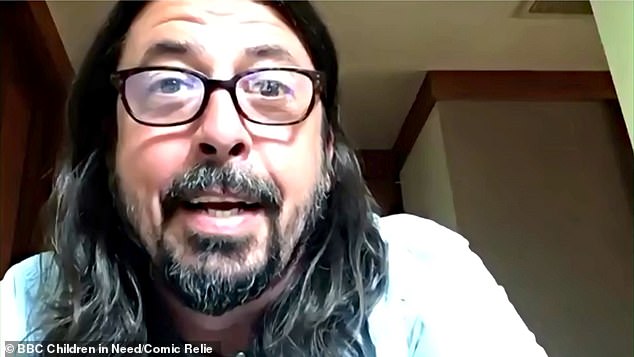 Celebrations: The charity track is the first Foo Fighters song to reach number one in the UK and Dave Grohl has shared his joy

The track was produced by Grammy award-winning producer Fraser T Smith, who has worked with Stormzy, Adele and Dave.

Smith told the Official Charts Company: ‘To have produced this number one with the Live Lounge All-Stars means the world to me.

‘Every artist stepped up to make this a truly soulful version of the Foo Fighters classic, and I want to thank the incredible Radio 1 team, DJs who have supported it, and everyone who’s downloaded and streamed this song to raise so much money for all the charities, in the fight against Covid-19.’

On the albums chart, Lipa’s Future Nostalgia claims its third non-consecutive week at number one. 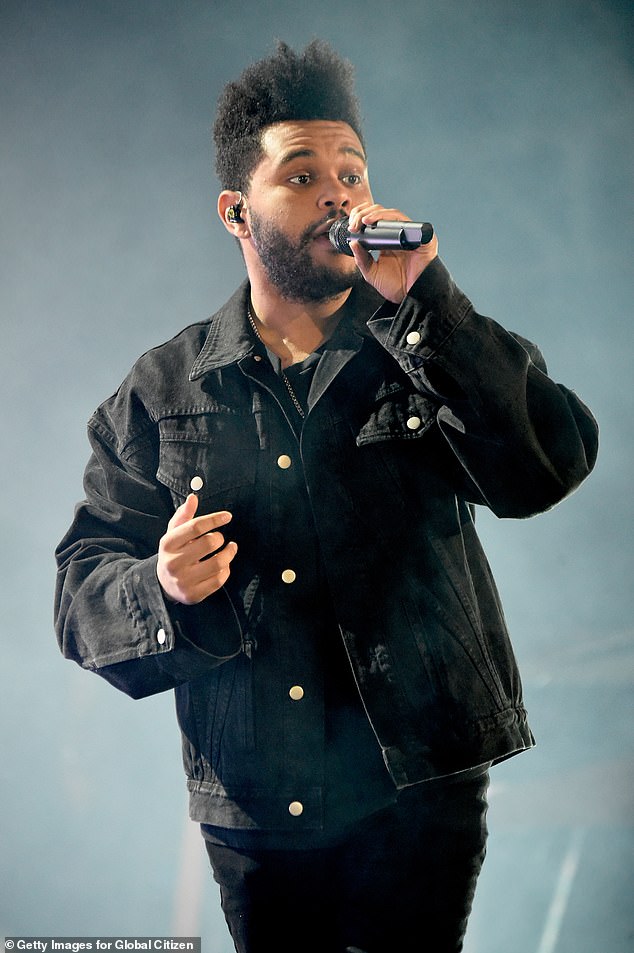