Before Donald Trump became the United States’ 45th president in 2016, he was known as a successful businessman and real-estate mogul. His Trump Organization owns buildings, golf courses, and hotels all around the world, and he serves as executive for over 500 companies (via The Washington Post). Some of his flagship properties include the Trump Tower in Manhattan and Chicago and private club Mar-a-Lago in Palm Beach, Fla.

Before he became president, Trump discussed his real-estate success in an interview with Forbes in 2011. “I’m in lots of different areas. We’re in Los Angeles, we have a lot of land right on the ocean, on the Pacific Ocean … I hate the expression, ‘location, location, location,’ because it’s so overused … So, I always say talent over location,” he explained. “But I just notice that when you have that right piece of property, whatever it might be, including location, it tends to work well in good times and in bad times.”

After a tumultuous four-year presidency and a global pandemic, is Trump’s assertion that the right piece of property works well in both good and bad times true? According to The Washington Post, Trump businesses are currently in crisis as many clients, lawyers, lenders, and business partners continuously jump ship. Keep scrolling to find out what this means for the former president’s ability to continue to sell his real-estate properties and if he’s been successful at bringing in buyers since leaving office.

Trump's real estate is getting snatched up at bargain prices 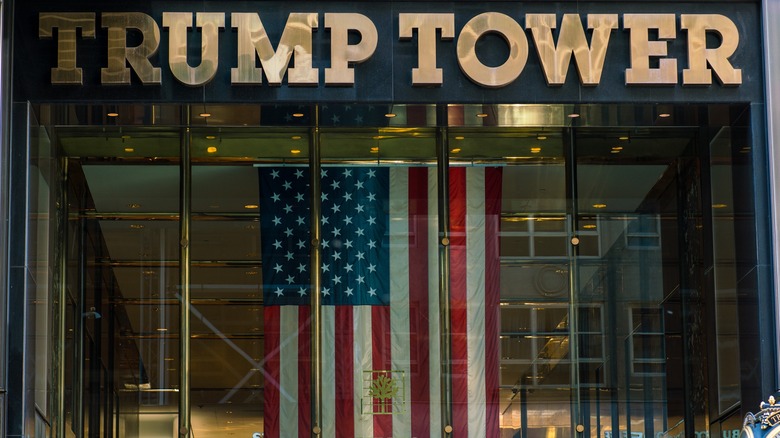 According to the New York Post, Trump properties have seen sales skyrocket since former President Donald Trump left office in January. However, while the sales of around two dozen properties listed on the Trump Organization website went up by 72%, prices of said properties have plummeted. Since Trump began his presidency in the beginning of 2017, property prices have fallen by 24%. Matthew Quint, director of the Center on Global Brand Leadership at Columbia Business School, gave his opinion on why Trump’s real-estate sales have been affected (via Realtor). “Of course the Trump brand has taken a hit [since his presidency]. He’s a controversial character now. When he made the decision to run for president, by nature he was going to change the perception of the Trump business brand,” Quint said.

The Guardian also reports that the price-drop among Trump buildings can be attributed to a combination of his polarizing image and the economic toll seen by the coronavirus pandemic. The publication spoke with Gary Gabriel, who owns an apartment in the Trump Palace on Manhattan’s Upper East Side. Gabriel told reporters that he’d be happy to see the Trump name taken off the building, referring to it as “embarrassing.” However, for those who don’t mind the name, moving to a Trump property has been a fantastic opportunity. Nilufar Kabir bought an apartment in Trump’s Chicago condo-hotel earlier this year for one-fifth of what the seller paid and calls the deal “a bargain.”