Products featured are independently selected by our editorial team and we may earn a commission from purchases made from our links; the retailer may also receive certain auditable data for accounting purposes.

You’ve gone around the world hunting for the coolest records, and kept them in pristine condition; why shouldn’t you display your favorites with pride instead of keeping them on a shelf all the time?

The best record frames and displays come in a few different varieties, ranging from picture frame-style mounts, to stands that let you change the album you’re showcasing frequently. The latter is great if you want to display the LP you’re playing at the time to add some ambiance to the experience.

There are also models that allow you to mount your favorite 12-inch onto your wall more permanently, so you can re-live that time you met Zooey Deschanel and M.Ward and got them to sign a copy of the first She & Him album, for example, or to commemorate a favorite concert you attended.

If you’re planning on wall mounting your records, be sure you have the right tools, or at least a stud finder or good screwdriver. If you plan to play these LPs again, you’ll also want to make sure you keep you keep them in an area away from direct sunlight or heat, which could affect the disc’s playability.

Whether you’re looking for easy decor ideas or trying a new way of organizing your records, keeping your favorite discs on display is another way to express your love of music. Here are six ways to do it.

How to Organize Your Music Collection at Home

For the Record: How to Clean and Care for Your Vinyl Collection

Once you’ve put a record on your turntable, it can be awkward to figure out where to put the cover art. MÖNKE’s wooden wall mount can hold one record (a single or double-album), or a couple of 7-inch singles side by side. The pinewood mount has a groove that holds the record in place, and lets it lean back against a wall. 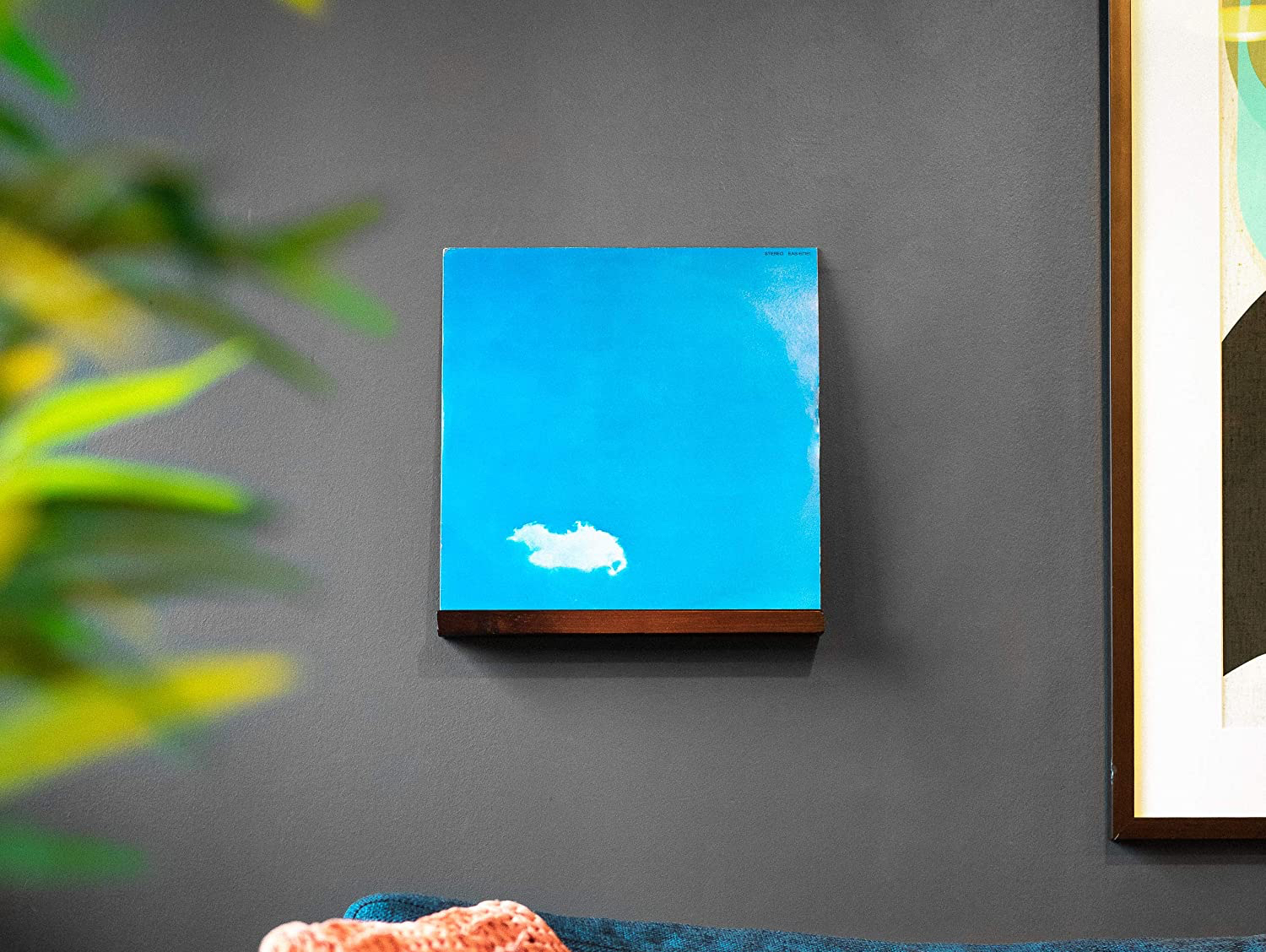 To install the frame, screw the included screws into your wall, and slide the mount onto them; a pair of keyholes on the back of the stand will lock the screws into place. Alternatively, if your turntable is on a shelf that’s up against the wall, you can simply place MÖNKE’s mount next to it. Your record will stay in place, and lean up against the wall the same way it would if the mount was screwed into your wall. 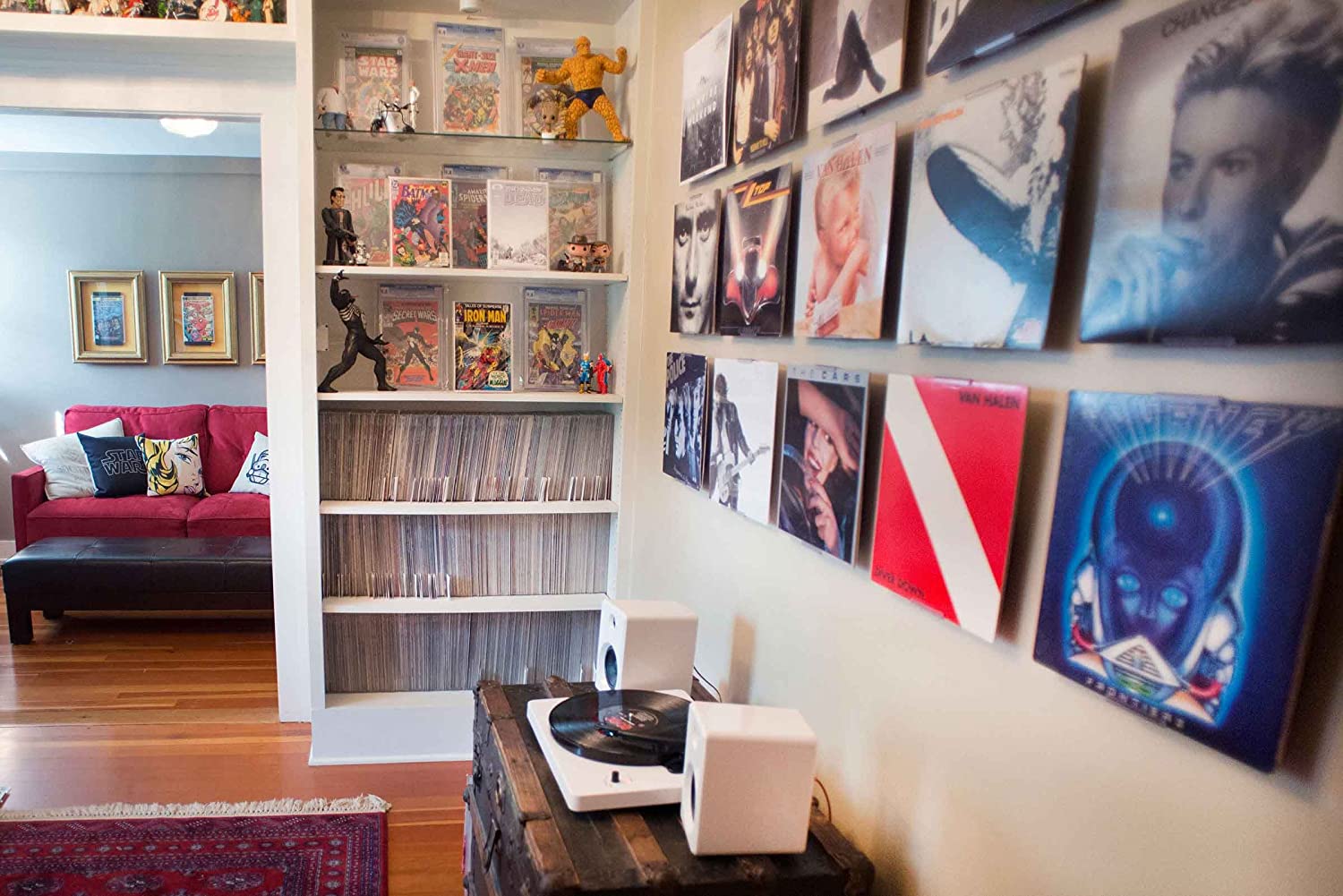 Collector Mount’s Vinyl Record Frame was designed to give your framed albums a suspended, 3D look. The frame is made up of two plastic pieces, which you can size-up or down to fit the type of album you’re framing: full-sized LPs and 10-inch records will fit best.

Once they’re attached, you can nail or screw the mount into your wall (screws and nails are not included), and slide the LP into the frame. Alternatively, you can attach the two mounting pieces back to back to create a stand, which can be set next to your record player.

The suspended, pop-up look of the records when they’re mounted is really eye-catching. The plastic pieces holding the top and bottom are barely visible, so they’ll look like they’re floating if you’re not looking closely. 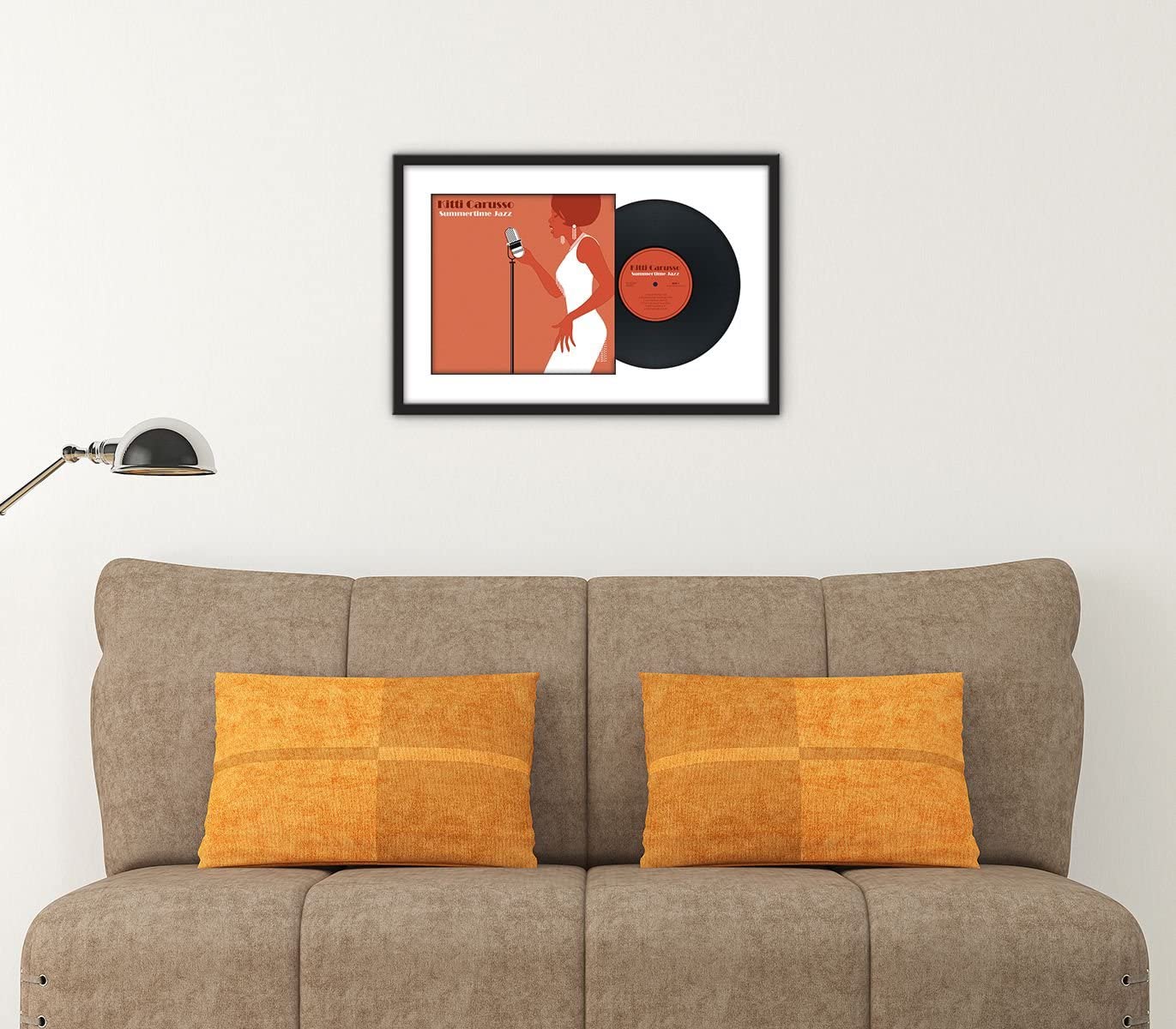 Permanently-framed records can be a major focal point of your room, and the perfect way to display autographed or incredibly rare vinyl. MCS’ deluxe record frame is 25 inches wide and 16.5 inches tall; that’s enough to display one 12-inch LP and its artwork. The frame is double matted, so the white background will make the colors on your album’s cover art pop, while the thin-black line around the sleeve and album will give it definition.

There’s no trick to hanging this frame, all you need to do is hammer in a couple of nails into your wall, and put the frame’s clamps on top of them. 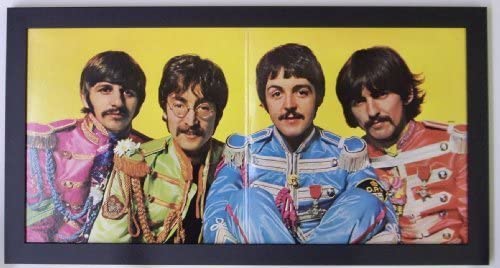 One of the most popular reasons to frame records is to display their large album artwork. That’s doubly true when they have a large, gatefold sleeve, like The Beatles’ Sgt. Pepper’s Lonely Hearts Club Band. Frame My Collection’s gatefold frame is 12.5 inches wide and 25 inches long, so it can perfectly fit an unfolded sleeve. The black border is 3/4 of an inch thick, and will provide some contrast with brightly-colored album covers.

The frame has hangers that let you hang it horizontally or vertically, in case the album you’d like to frame has a portrait design. Like MCS’ frame, there’s no fancy way to set up this frame: select your location, hammer in a couple of nails, and hang it. 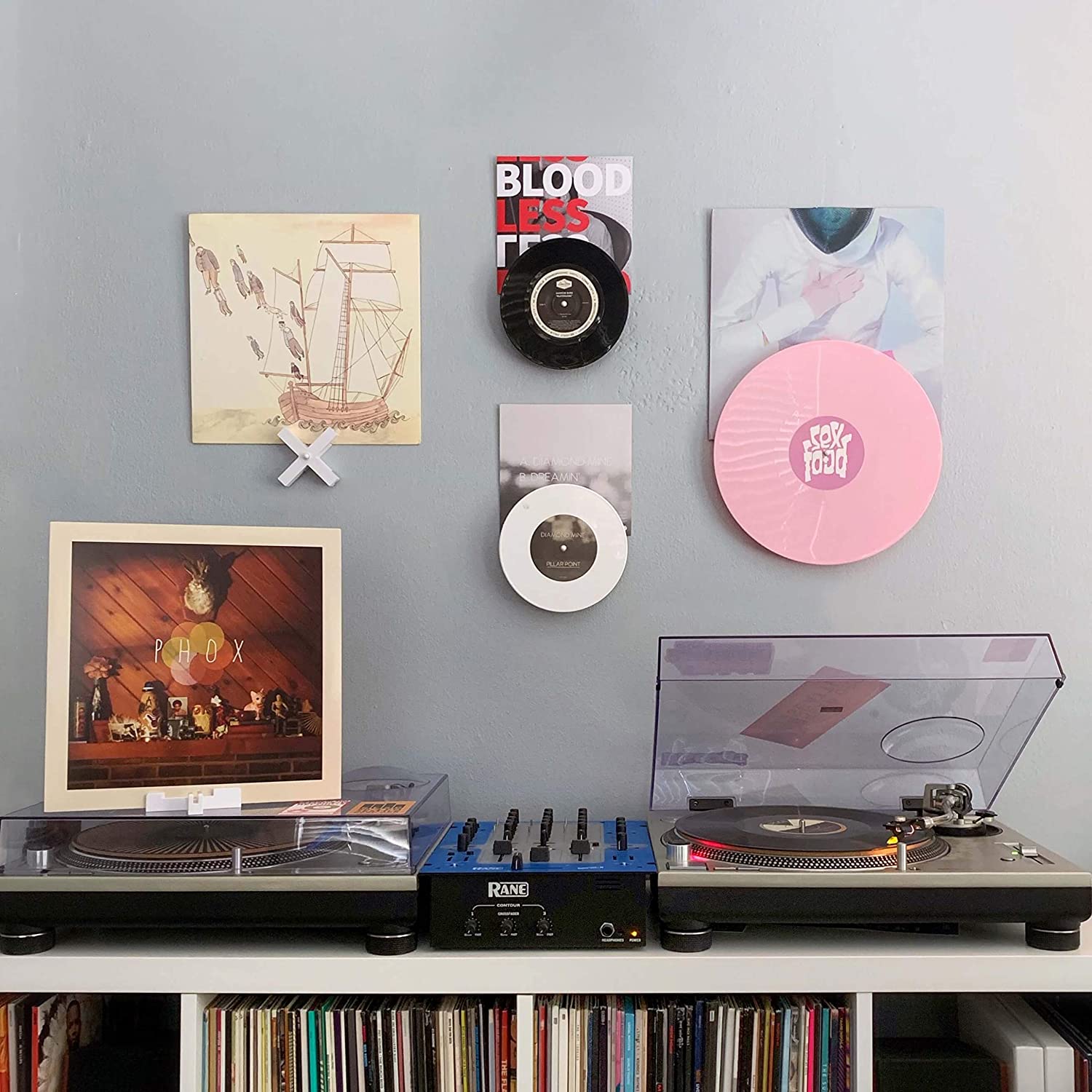 Most of the record frames we’ve recommended so far have been tailor-made to highlight 12-inch LPs, but what about singles? Or EPs? If you want to display selections from every part of your record collection, Record Props makes the best option.

Record props says the X-shaped holder can be installed in under 10 minutes, but it does require a little more effort to mount. A smaller X-shaped wall mount needs to be screwed into your wall and secured; the larger X-shaped pieces then fit on top of it, and click into place when turned.

Once attached, your album’s artwork is held in place by a groove on top of the X; your record is suspended on top of a little stump protruding from the middle of the holder, which fits into its spindle hole.

When everything is assembled, your album’s artwork and the record itself are both on full display. The vinyl blocks the holder, so your music looks completely suspended in mid-air. Although both are secure, you can easily pluck the album and sleeve off the shelf, and switch them out without having to disassemble any part of the frame. As a bonus, Record Prop’s frame can also be placed on its side, and hold your record upright between one of its two grooves — you can see this on the PHOX album in the photo above. 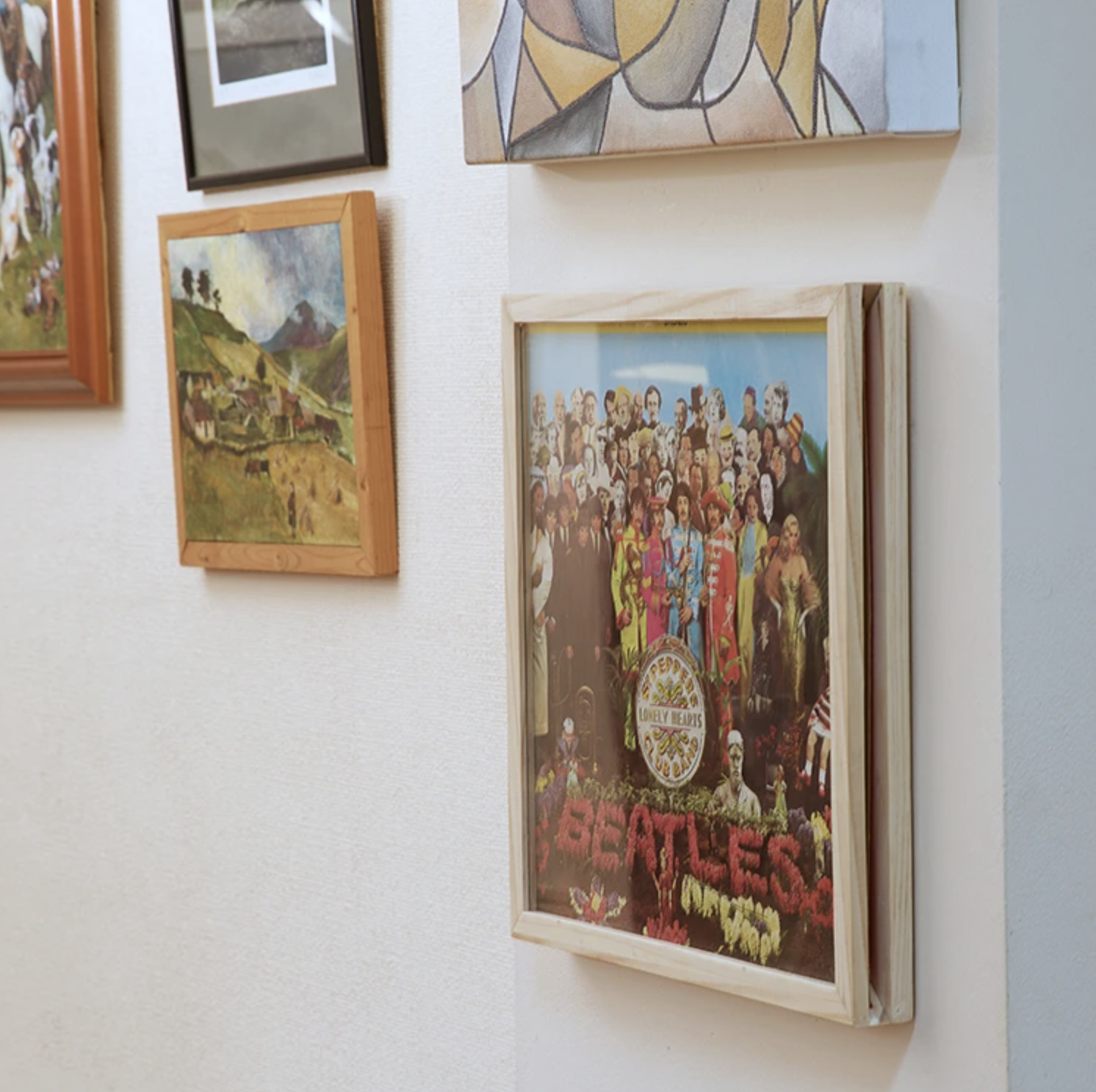 When framing records, you typically have to make a choice between making them easily accessible, and keeping them protected. The frames we’ve recommended from MÖNKE and Record Props are great examples of the first type — you can swap out your records, but if someone accidentally knocks the record over, it can get ruined. The frames we’ve recommended from MCS and Frame My Collection are good examples of the second group — your vinyl is completely protected, but stuck behind glass, so you probably won’t get to play it.

KAIU’s frame walks a delicate line, and provides both protection and accessibility. The frame comes preassembled, and has a front door that’s held closed by a magnetic latch. When your record is inside the frame, it’s completely protected from liquid, and won’t fall down if someone accidentally bumps into the wall. But, when you want to change the record out, you can open the magnetic door, and swap one LP for another. It’s a happy medium if you want your LPs to blend in with the framed photos and artwork next to them on the wall, but want the freedom to change it at a moment’s notice.