Julia Bradbury filmed herself hugging a tree and posted the ‘beautiful’ evidence from a recent Mauritius getaway to Instagram on Wednesday, amid her battle with breast cancer.

The TV presenter, 51, embraced a ‘special’ 100-year-old Ebony while gushing about its ‘finely mirrored texture’ and which makes for a ‘special landscape’.

Going make-up free, she tied her brown tresses into a tousled ponytail and wore a black top as she addressed her fans on the social media network. 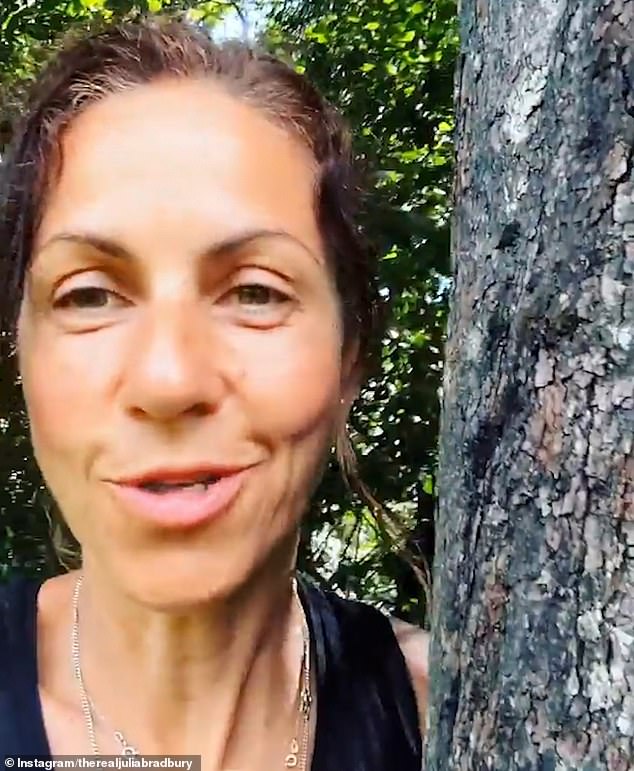 Inspired: Julia Bradbury filmed herself hugging a tree and posted the ‘beautiful’ evidence from a recent Mauritius getaway to Instagram on Wednesday, amid her battle with breast cancer

She said: ‘So this is a famous black Ebony tree and this one is about 100 years old, very very special. Of course I’m gonna give it a hug. Yes, tree love.’

In her caption, the Countryfile host penned: ‘Have you hugged a tree this week?!

‘Throw back to our hols ..trekking through the beautiful @belombrenaturereserve in #mauritius. I couldn’t pass by this beautiful black ebony tree without having a moment.

‘Feel so grateful to have walked through such a special landscape. Ebony wood is so dense it sinks in water. 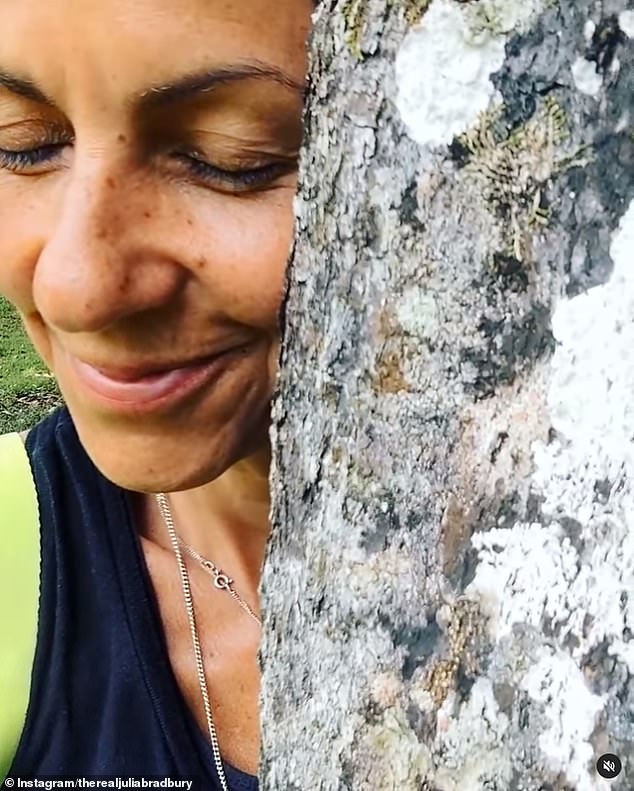 In her element: The TV presenter, 51, embraced a ‘special’ 100-year-old Ebony while gushing about its ‘finely mirrored texture’ and which makes for a ‘special landscape’ 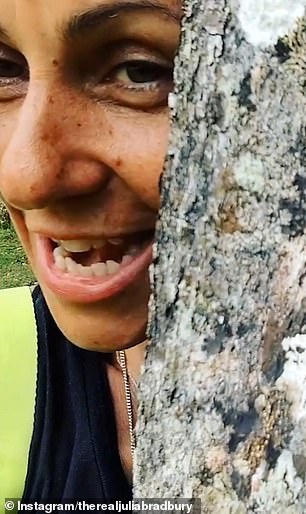 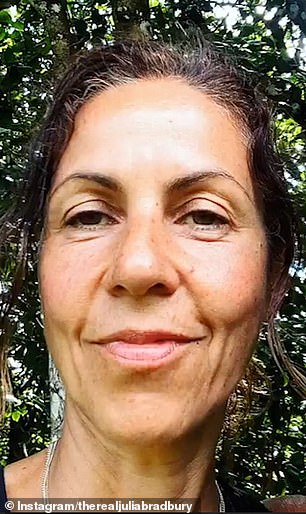 Natural beauty: Going make-up free, she tied her brown tresses into a tousled ponytail and wore a black top as she addressed her fans on the social media network

Your turn: In her caption, the Countryfile host penned: ‘Have you hugged a tree this week?!’

‘It’s finely mirrored texture when it’s polished, makes it a prized ornamental wood, but it couldn’t look any more beautiful than growing in the soil.

Julia recently said she was unsure whether she would ever travel or wear a bikini again following her breast cancer diagnosis.

The TV personality underwent a mastectomy in October during which her breast plus two lymph glands were removed before reconstruction took place. 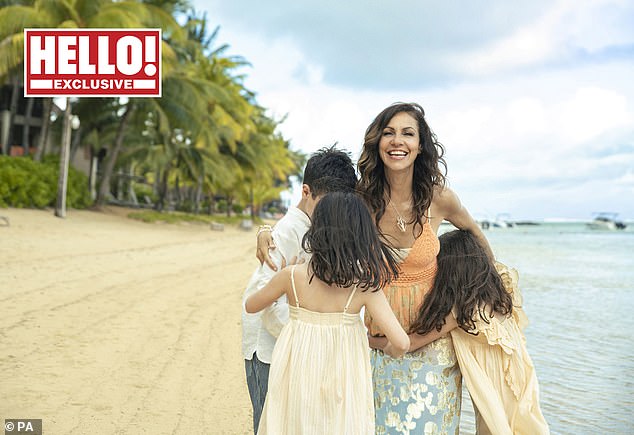 Honest: Julia recently said she was unsure whether she would ever travel or wear a bikini again following her breast cancer diagnosis

She spoke to Hello! magazine from Mauritius where she was on holiday with her partner Gerry and their three children, Zephyrus, 10, and seven-year-old twins Xanthe and Zena.

‘I wasn’t sure that I would ever travel again – and certainly wasn’t sure whether I’d wear a bikini ever again.’

Julia added she had always appreciated the ‘healing power of nature’ and did so even more now. 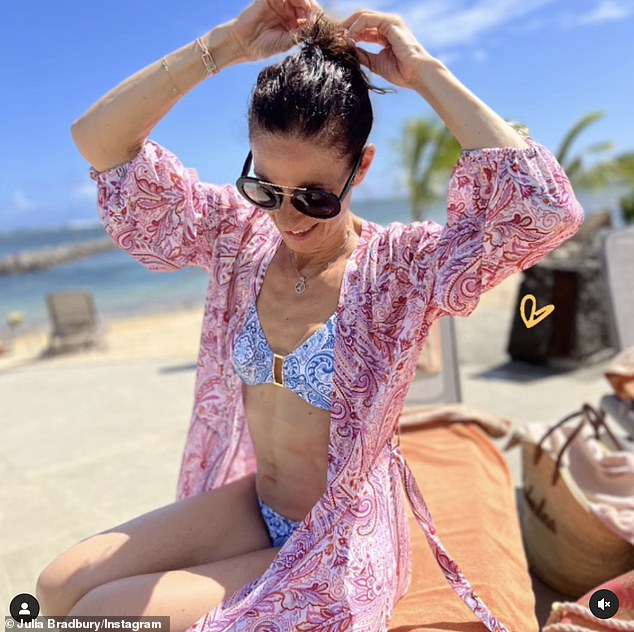 Back in a bikini! On Friday, Julia wore a bikini for the first time since undergoing a double mastectomy in October, as she holidayed in Mauritius

‘I’m still at the acute end of coming through my diagnosis and coming to terms with everything, so life is very heightened,’ she said.

‘The skies are a deeper shade of blue, the patterns of nature are more striking than usual. I’m taking it all in.’

The broadcaster said she was using her illness as an opportunity to ‘reset’ her emotional and physical health and now practises meditation and gratitude every day, sleeps at least eight hours each night and has cut out almost all alcohol. 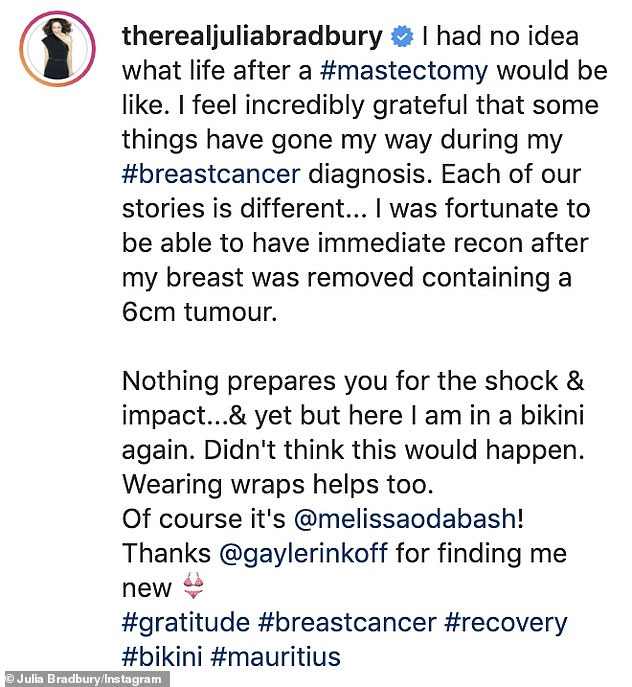 Grateful: The TV personality wrote alongside the photograph, that she feels ‘fortunate’ to have had immediate breast reconstruction

Julia also told how she had promised at the beginning of the holiday to agree to any of her children’s requests, from swimming to trekking or eating ice cream but only one a day.

She added: ‘They are this size for such a short time: you blink and they’re gone. 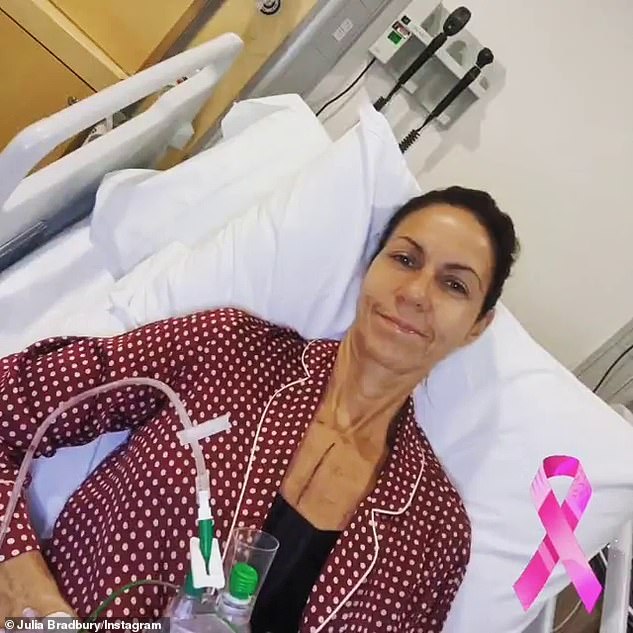 Battle: The Countryfile presenter announced that she been diagnosed with breast cancer in September 2021 and underwent a double mastectomy a month later

‘I want to enjoy every one of those moments and they’re even more magnified and precious now.’

It comes after Julia wore a bikini for the first time since undergoing the procedure, as she holidayed in Mauritius, and admitted she feels ‘fortunate’ to have had immediate breast reconstruction.

The TV personality took to Instagram where she shared a gorgeous shot of herself in a blue bikini and beach cover-up in matching print, while relaxing in the sunshine.

Julia penned: ‘I had no idea what life after a #mastectomy would be like. I feel incredibly grateful that some things have gone my way during my #breastcancer diagnosis. Each of our stories is different…

‘I was fortunate to be able to have immediate recon after my breast was removed containing a 6cm tumour.

‘Nothing prepares you for the shock & impact…& yet but here I am in a bikini again. Didn’t think this would happen. 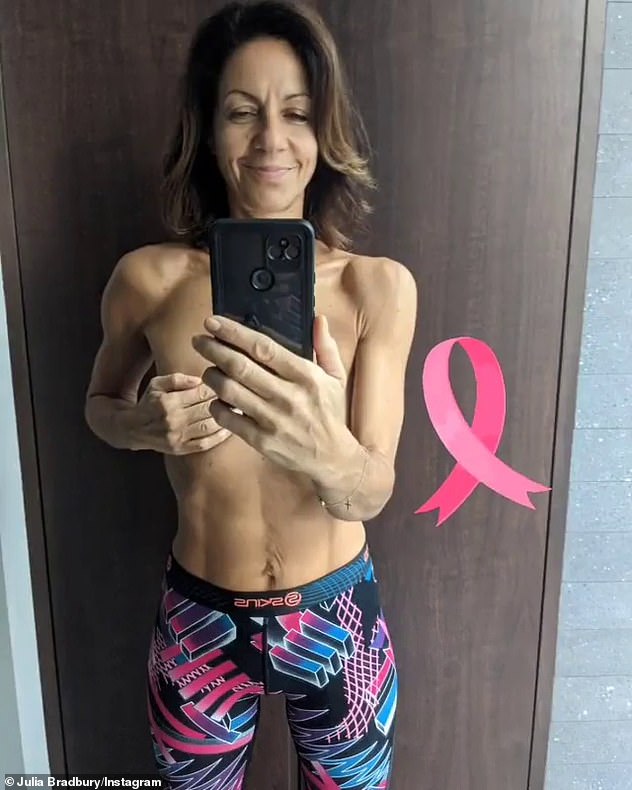 Candid: Julia recently revealed that the risk of her cancer is returning is higher than average and detailed her experience learning to love her body after a mastectomy

Her holiday snap comes after Julia revealed that the risk of her cancer is returning is higher than average and detailed her experience learning to love her body after a mastectomy in a candid chat.

Six months after undergoing her surgery, the presenter is now having to come to terms with the knowledge that she does not yet have the ‘all clear’ from doctors. 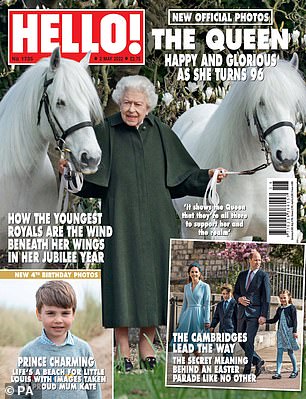 Julia revealed to You magazine that she has ‘micro-invasions’ – tiny fragments of cancerous cells which have leached out of her milk duct and into her breast tissue.

Furthermore, genetic testing has shown that she has a higher than average risk of her cancer coming back.

She explained: ‘I’m in the top five or six per cent of women in the country in terms of the likelihood of recurrence.

‘That puts me in the ‘moderate risk’ category – higher than the average woman – but, look, it’s about percentages and perspectives.

‘The doctors have not found a huge spread of an aggressive cancer. I have lost my breast but been able to have an implant and keep my own nipple.

‘I feel lucky and grateful every single day, and I have to learn to live with this risk, to accept the fragility of life, without it consuming me.’

Read the full interview in Hello! magazine, out now.

What is breast cancer?

Breast cancer develops from a cancerous cell which develops in the lining of a duct or lobule in one of the breasts.

When the breast cancer has spread into surrounding breast tissue it is called an ‘invasive’ breast cancer. Some people are diagnosed with ‘carcinoma in situ’, where no cancer cells have grown beyond the duct or lobule.

Most cases develop in women over the age of 50 but younger women are sometimes affected. Breast cancer can develop in men though this is rare.

Staging means how big the cancer is and whether it has spread. Stage 1 is the earliest stage and stage 4 means the cancer has spread to another part of the body.

The cancerous cells are graded from low, which means a slow growth, to high, which is fast growing. High grade cancers are more likely to come back after they have first been treated.

A cancerous tumour starts from one abnormal cell. The exact reason why a cell becomes cancerous is unclear. It is thought that something damages or alters certain genes in the cell. This makes the cell abnormal and multiply ‘out of control’.

Although breast cancer can develop for no apparent reason, there are some risk factors that can increase the chance of developing breast cancer, such as genetics.

What are the symptoms of breast cancer?

The usual first symptom is a painless lump in the breast, although most breast lumps are not cancerous and are fluid filled cysts, which are benign.

The first place that breast cancer usually spreads to is the lymph nodes in the armpit. If this occurs you will develop a swelling or lump in an armpit.

How is breast cancer diagnosed?

If you are confirmed to have breast cancer, further tests may be needed to assess if it has spread. For example, blood tests, an ultrasound scan of the liver or a chest x-ray.

How is breast cancer treated?

Treatment options which may be considered include surgery, chemotherapy, radiotherapy and hormone treatment. Often a combination of two or more of these treatments are used.

How successful is treatment?

The outlook is best in those who are diagnosed when the cancer is still small, and has not spread. Surgical removal of a tumour in an early stage may then give a good chance of cure.

The routine mammography offered to women between the ages of 50 and 70 mean more breast cancers are being diagnosed and treated at an early stage.