Kelly Ripa may enjoy her hosting duties on Live! With Kelly and Ryan, but she loves spending time away from its studios and on vacation just as much!

The star has been on a well-deserved tropical getaway alongside Mark Consuelos, and a totally unexpected star has also tagged along.

She took to Instagram to share a glimpse of what she has been up to during her time off, and fans are surely relieved they nonetheless get daily updates from her even if she’s not on Live!

MORE: Why Kelly Ripa has more than one reason to celebrate during her time off Live

Her latest update is quite salacious, and reveals how Mark isn’t the only heartthrob she is spending time with.

Kelly took to her Instagram Stories to share a video that surely had all her fans swooning, as it saw Mark coming out of the beach and running towards her, shirtless and in slow motion no less, alongside one of his Riverdale co-stars.

The longtime couple were joined by Casey Cott, 30, who stars as Kevin Keller in the dramatic CW show, which is slated to premiere its final season next year.

The oceanside clip sees the actor running next to Mark – Baywatch style – towards the host, though their ab-baring moment was cut short when another beachgoer walked right past the camera, much to Kelly’s disappointment.

Her subsequent stories later revealed that they are in fact celebrating a big day for Casey, his 30th birthday. 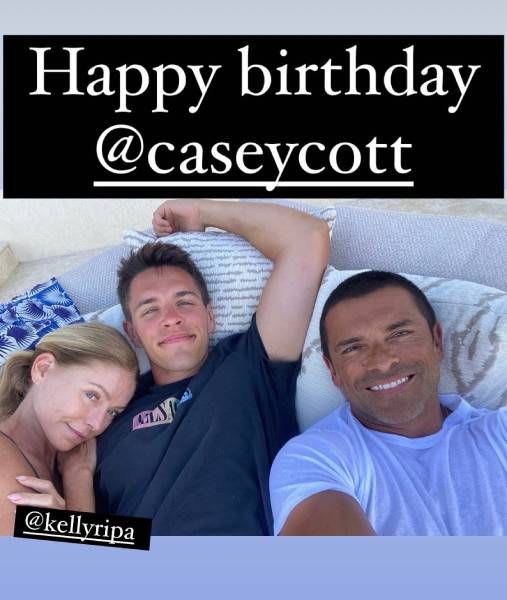 Mark’s sweet tribute to his co-star

Mark commemorated his co-star’s milestone celebration by sharing a photo that proves just how close they are.

The sweet birthday selfie sees the three basking in the sun and relaxing after a dip in the water, showcasing their sunkissed glow as they lay back on a plush beach bed, and while Mark takes the selfie, Kelly is cozying up next to the birthday boy.