Kim Kardashian and Pete Davidson are still going strong—despite currently being in a long distance relationship thanks to Pete filming a movie in Australia, womp. But apparently these two are keeping the passion going with some good old-fashioned love notes.

“Kim and Pete are in constant communication,” a source tells US Weekly, adding “time zones and filming call times make talking difficult,” but that “They send each other love notes while the other is sleeping and FaceTime whenever their schedules link up.”

Meanwhile, yes “the distance has been hard,” but even “communicating long-distance is exciting” for these two, and they “can’t wait until they’re in the same place again.” 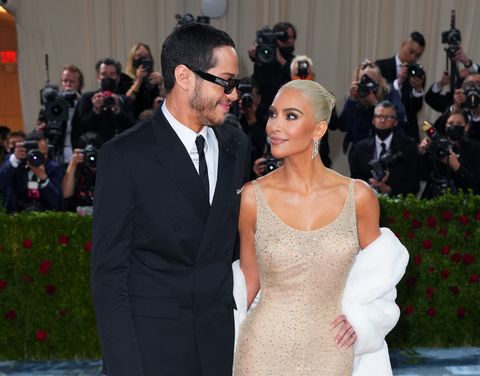 So, like, when is that going to be (for people who have found themselves randomly invested in this relationship)? “They both have busy schedules at the moment, but are still making time to be together,” another source says. “They’re very much enjoying spending time together.”

Cool cool cool. And FYI yet another insider told E! News recently that “Pete plans to come back to L.A. after filming wraps to spend time with her for a few days” and that “Kim loves that he’s always making her laugh and he truly makes her day when they talk. She is still smitten over him and it just works for her.”

Wild to think that these two are already coming up on their one-year anniversary in October! Time flies when you’re causing the internet to spiral.