Meet the famous pets who have more Instagram followers than you

Kim Kardashian spent Easter with her family in Palm Springs, and decided to post some photos of herself wearing a yellow workout outfit in what I can only assume was a subtle reference to PEEPS, the greatest candy of all time.

And speaking of things that are “subtle,” she also went ahead and supported Kanye West amid their divorce by wearing a pair of new Yeezy slides. 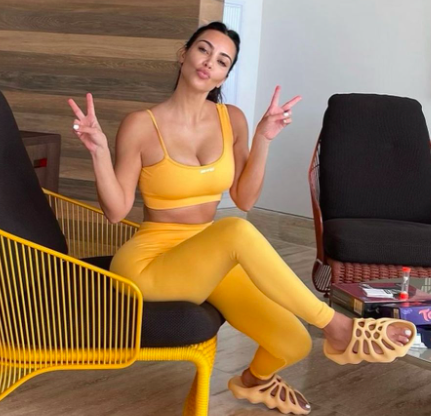 While Kim is clearly still repping Kanye’s brand, she does seem to have officially stopped using the last name West based on some personalized golf bags Kris Jenner posted. In other words, she’s back to straight up “Kim Kardashian.”

As of now, it appears as though both Kim and Kanye are concentrating on co-parenting their kids—though back in March Page Six reported that they aren’t speaking directly—instead communicating through Kanye’s security team. They also try not to be in the house at the same time as they navigate their split. “She leaves the house and he arrives and hangs out with the kids,” a source said. “They have an army of nannies so the transition is easy.”

A source also told People that Kanye requested Kim not be there during his visits, saying, “Kanye has been spending time with all the kids. A nanny is around during the visits. Kim has not been around for the visits, at Kanye’s request.”

Obviously, not speaking to your ex is pretty standard during a split, but clearly Kim and Kanye are doing their best to keep this divorce drama-free.

You love celeb news. So do we! Let’s overanalyze it together.