Kirsten Dunst announced her second pregnancy by debuting her baby bump on the cover of ‘W’ Magazine!

Another baby is on the way for Kirsten Dunst and her fiance, Jesse Plemons. The actress confirmed that she’s pregnant with the pair’s second child by showing off her baby bump for the first time on the cover of W Magazine. Kirsten appeared alongside Elle Fanning and Rashida Jones on the cover, WHICH YOU CAN SEE HERE, and her bump was front and center as she posed on her back while wearing a lacy white Rodarte dress.

The ladies posed with direction from Sofia Coppola, who they all previously worked with, for W’s Director’s Issue. The shots were inspired by magazine shoots from the 1980s. In another pic from the spread, Kirsten wore a lavender dress while lounging on the floor. This time, her baby bump was more covered up than in the see-through white ensemble. “Every shot was on the floor,” Kirsten told the mag. “I was like, ‘I can’t get up!’ I felt like Urkel.” 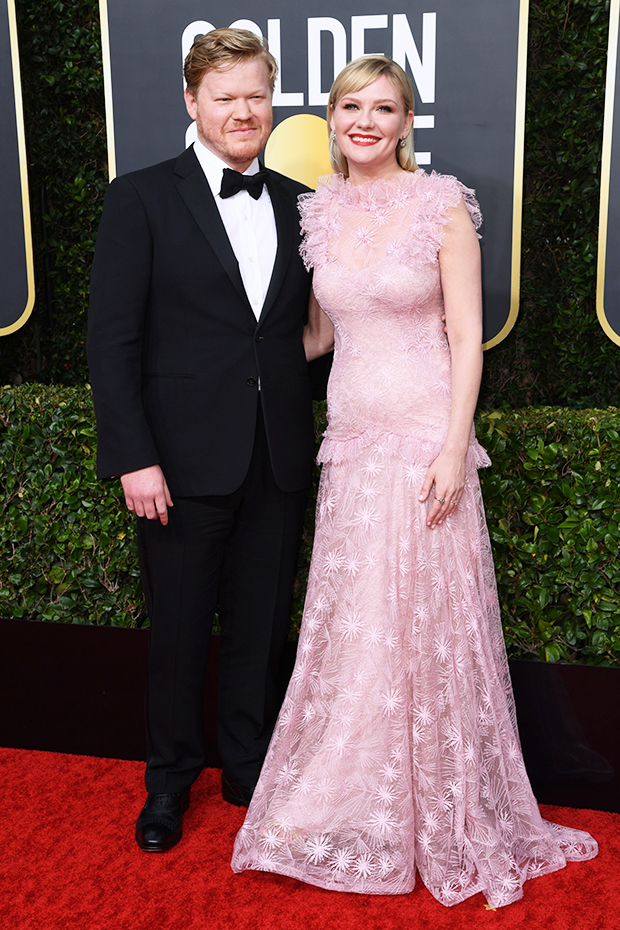 Kirsten has been in a relationship with Jesse since 2016, after they met on the set of their show, Fargo. They got engaged the following year, and had their son, Ennis Plemons, in May 2018. Kirsten was previously engaged to Garrett Hedlund, who she was with from 2012 until 2016 after meeting on set of On The Road. Garrett is now dating Emma Roberts, and they welcomed their first child together at the end of 2020.

Kirsten and Jesse are fairly private about their relationship, and do their best to keep their son out of the public eye. It’s unclear how far along Kirsten is in her second pregnancy, but she’s clearly been keeping the news under wraps for quite some time! In the magazine, she also poses on a couch in a bejeweled gown, on the floor in a floral ensemble and standing in a hot pink, strapless look.

Meanwhile, Rashida and Elle look glamorous in various shots of their own. All three ladies absolutely nailed their shoots, and they gushed over working with Sofia in the accompanying piece.