Marvel Studios has its first official LGBTQIA+ superhero — or, depending on your point of view, supervillain.

On the latest episode of the Disney Plus series “Loki,” Tom Hiddleston’s titular god of mischief confirms what had been long established in the pages of Marvel comics, that he is bisexual (or, just as likely, pansexual).

It happens during a conversation Loki has with a Loki “variant” named Sylvie (Sophia Di Martino), who revealed herself at the end of last week’s episode just as she launched her grand scheme to wreak havoc on the Time Variance Authority. As they sit on a train waiting to arrive at a critical destination, the discussion turns to love. Sylvie says she’s been in “a serious, long-distance relationship with a postman” while she skitters through time and across apocalypses to avoid detection by the TVA. Then she asks Loki if he has a paramour.

“You’re a prince,” she says. “Must’ve been would-be-princesses.” Then, with a knowing jump of her eyebrows: “Or perhaps, another prince.”

It’s a quiet moment that passes quickly, as Loki and Sylvie’s plan to escape the doomed planet of Lamentis 1 collides into a series of escalating roadblocks. But seeing as it comes during Pride Month — and on a planet bathed in the pink, purple, and deep blue color scheme of the bisexual flag — it certainly seems like Marvel Studios recognizes that Loki’s casual revelation of his sexuality would carry significant meaning for many LGBTQIA+ fans.

And yet, in 2021, it feels a bit odd to be celebrating this fleeting acknowledgment as a milestone in queer representation when there are so many other examples of superhero TV shows embracing it. The CW’s “Batwoman” centers on two lesbian superheroes — Kate Kane (played by Ruby Rose in Season 1, and Wallis Day in Season 2) and Ryan Wilder (Javicia Leslie). Similarly, on CW’s “Supergirl,” the titular hero’s sister Alex (Chyler Leigh) is gay and has had multiple girlfriends; on Season 4, the show debuted TV’s first trans superhero, Dreamer (played by trans actor Nicole Maines).

Matt Bomer plays gay superhero Larry Trainor on HBO Max’s “Doom Patrol.” Jefferson Pierce’s daughter Anissa (Nafessa Williams) on “Black Lightning” is a lesbian; Oliver Queen’s son William (Ben Lewis) on “Arrow” is gay. Amazon’s “The Boys” explores how Queen Maeve (Dominique McElligott) had to end her relationship with her girlfriend for fear of being outed; on “Invincible,” by contrast, the titular hero’s gay best friend William (Andrew Rannells) is very much out and proud. 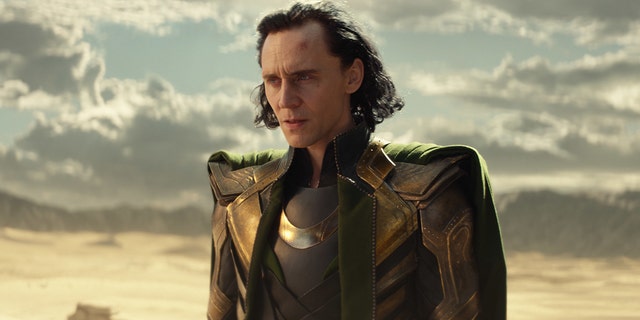 ‘Loki’ episode 3 revealed that the villain is bisexual.
(Disney)

Queer representation isn’t limited to TV heroes, either: On Fox’s “Gotham,” the Penguin (Robin Lord Taylor) was in love with the Riddler (Cory Michael Smith), and Jada Pinkett Smith’s Fish Mooney was sexually fluid. And on Netflix’s “Jessica Jones” — technically a Marvel TV series, though not one produced by Marvel Studios — the morally flexible lawyer Jeri Hogarth (Carrie-Anne Moss) had several girlfriends. In the final season of the show, Jessica (Krysten Ritter) also had a trans assistant, Gillian (played by trans actor Aneesh Sheth).

That’s far from a comprehensive accounting of openly LGBTQIA characters in superhero storytelling, but when we turn the lens to Marvel Studios, the picture gets profoundly smaller. There’s the grieving gay man in “Avengers: Endgame” played by director Joe Russo. Tessa Thompson has said that her “Thor: Ragnarok” character was bisexual, but any mention of it was cut from the film. And that’s pretty much it.

So making Loki — one of the most popular characters ever to grace the MCU — explicitly bisexual does mark a significant step forward for LGBTQIA representation…for the MCU. Whether Loki will ever have cause to express same-sex love or sexual attraction remains to be seen, but at least two queer characters are on the MCU’s immediate horizon: The feature film “Eternals,” set to open in November, will include the MCU’s first gay superhero in Phastos (Brian Tyree Henry), who will have a husband (played by out actor Haaz Sleiman).

The MCU is expanding aggressively, with 10 titles set to debut in 2021, and at least 19 in the works for 2022 and beyond, and several characters who are LGBTQIA in the comics have started to pop up in the MCU, or will soon. Their ultimate sexual identities in the MCU, however, remain unconfirmed.

In “Doctor Strange in the Multiverse of Madness,” opening March 2022, Xochitl Gomez (“The Baby-Sitters Club”) will play America Chavez, who in the comics is a lesbian and becomes the superhero Miss America. The introduction of Wanda Maximoff’s twin sons Billy and Tommy on Disney Plus’ “WandaVision” suggests that they will eventually evolve into their respective comic book personas of Wiccan (who is gay) and Speed (who is bi).

And “Deadpool 3” is currently in development at Marvel Studios, which could bring lesbian superhero Negasonic Teenage Warhead (Brianna Hildebrand) to the MCU, not to mention that Deadpool himself is pansexual. Meanwhile, both Kevin Feige and “Guardians of the Galaxy” director James Gunn have suggested that there are already LGBTQIA characters in the MCU, we just don’t know it yet — which is pretty much the opposite of what representation is supposed to accomplish.

There has been vast number of heterosexual couples in the MCU who’ve found time to canoodle or at least get romantic while still saving the world, including Tony Stark and Pepper Potts, Steve Rogers and Peggy Carter, Thor and Jane Foster, T’Challa and Nakia, Hope van Dyne and Scott Lang, Gamora and Peter Quill, Clint Barton and Laura Barton, Steve Rogers and Sharon Carter, Natasha Romanoff and Bruce Banner, Wanda Maximoff and Vision, Bruce Banner and Betty Ross, Peter Parker and MJ, and Peter Parker and Liz Toomes.

It certainly seems like at this point, there should be plenty of room for whomever is queer in the MCU to get to do the same.