There’s no question Martha Stewart’s quarantine has been blissful. From tending to her gardens and chickens on her Bedford, NY estate to taking pool selfies in East Hampton, the domestic icon is thriving. As so many of us stress and obsess over the complications of 2020, Stewart seems to take it all in stride.

But, how is the 79 year-old so, well, chill? We now have a possible answer: CBD. While the hemp-derived compound (otherwise known as cannabidiol) shouldn’t cause a high, many users find that it soothes anxiety and aids sleep. Stewart is now hopping on the CBD bandwagon by introducing her own line products, featuring the compound.

While the key ingredient is new to Stewart’s empire, she incorporated CBD in a way that could not be more “on brand.” The products take three forms: soft gels, oil drops, and gummies, which Stewart has dubbed “pâte de fruit,” like the gourmet French dessert. The flavors are ultra-Martha as well, including Meyer lemon, kumquat, blood orange, and a berry medley featuring red and black raspberry and huckleberry. While these products are strictly for humans, Stewart is set to debut a CBD line for pets later this year.

It was Stewart’s friend, Calvin Broadus Jr. or Snoop Dogg, that introduced her to cannabis in the first place, albeit in a more extreme way than CBD.

“We sat next to each other for seven hours,” Ms. Stewart told the New York Times, referencing her and Snoop’s joint (ha) appearance at the 2015 Comedy Central Roast of Justin Bieber. “Snoop must have smoked 10 giant fat blunts, and I inhaled all that smoke. I felt really good.”

“A contact high, that’s what they call it,” she continued. “I had to fly that night, my family was in Saint Barths for Christmas vacation. I don’t remember going on the plane. I don’t remember doing anything. I didn’t remember my performance on the roast, but it was very successful.” 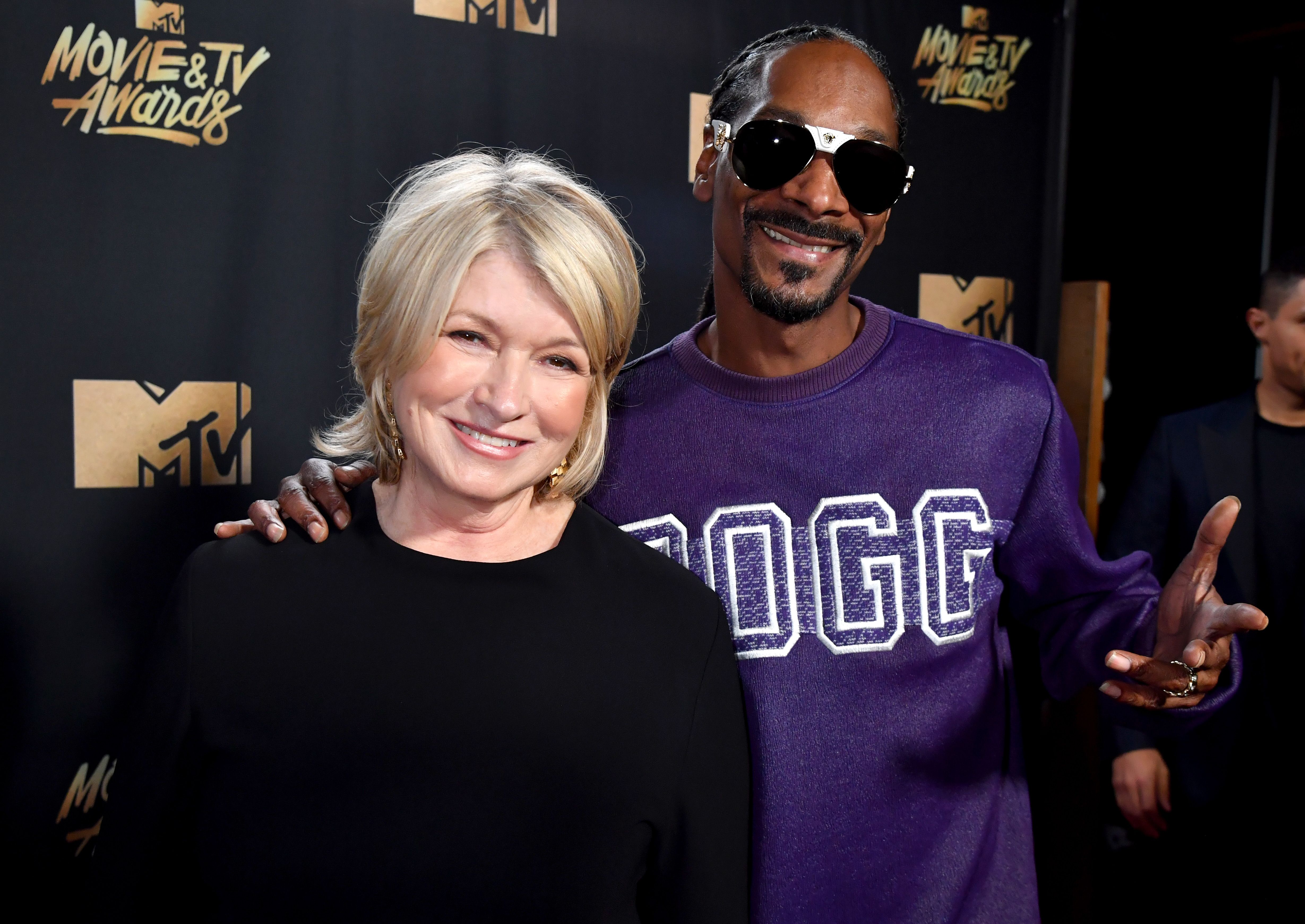 It was Snoop that eventually introduced Stewart to Canopy Growth, the cannabis company with whom Stewart is collaborating. The rapper also has a line with Canopy, called Leafs by Snoop. In early 2019, Stewart joined Canopy as an adviser with the goal of developing cannabis products for humans and their pets and now, that CBD dream has become reality.

Stewart herself has certainly been taking advantage of the product line. “I pop 20 of them and just feel OK, but some of my friends do two and feel high, I don’t know why. It’s not high like a marijuana high. It’s a CBD high, like, relaxed,” she told the New York Times.

After she’s had her CBD, the icon will perhaps work or hop on a Zoom call, or she might pamper one of the many animals on her estate: riding one of her Friesian horses, greeting her chickens or peacocks, or playing a YouTube singing tutorial for her canaries. “I have absolutely zero complaints about quarantine,” she said.

After a long day living life as Martha, the businesswoman might make herself and some pals a margarita (which she dubs a Martha-rita) and unwind. Her final activity of the day? CBD, naturally.

“The thing that really helps me are the oil drops that I have at night, before bed. I just put a couple droppers of the blood orange or Meyer lemon under my tongue,” she said. “Not a drop, half a dropper — it’s nothing.”

From: Town & Country US