It looks like Porsha Wiliams and her fiancé, Simon Guobadia, can move forward with their wedding plans. Two months after the couple announced their engagement, Simon’s ex and Porsha’s former co-star, Falynn Guobadia, shared that her divorce from Simon had been finalized.

“I am officially divorced! It’s a party!” she wrote on her Instagram Stories. “It’s a partyyy!!!” 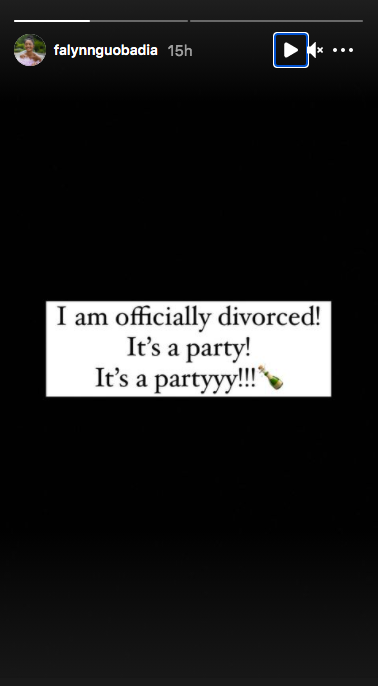 News of the 40-year-old Real Housewives of Atlanta star’s engagement to Simon, 57, first broke in May after a month of dating.

“Yes, we are crazy in love. I know it’s fast but we are living life each day to its fullest,” Porsha wrote of the romance at the time. “I choose happiness every morning and every night. Tuning out all negative energy and only focused on positive wishes. He makes me so happy and to me, that is what matters most.”

According to the new couple, Simon filed for divorce from Falynn, 32, in January, and Porsha claimed she and Falynn were not friends prior to the romance starting.

Falynn previously stated that she does not blame Porsha for the end of her marriage to Simon.

“No, no one has that power over my life, my husband’s life and our marriage,” Falynn said in an interview with Adam Newell back in June. “However, Simon and I were the ones who are married to one another, we’re the ones who created a family together and built a life with one another. I blame the both of us. He’s to blame, I am to blame and that is all. Whatever came after that. I’m not saying it was right. I’m not saying it was wrong. But no. No one has that power besides Simon and I.”

As for Simon and Porsha, the pair returned from a family trip to Cancun, Mexico, last week. Though she hasn’t shared when her nuptials will take place, Porsha has noted that there will be a total of three ceremonies for the happy couple.

“[Simon’s] African so we will have our native law and custom ceremony and a regular wedding, and then we’ll have another wedding at one of the houses that are out of the country,” Porsha said on Dish Nation in May. “He did say, ‘Oh babe, it’s OK. Just do whatever you want. It’s your day.'”