The Duke and Duchess of Sussex were reunited with the royal family once again on Monday as they bid an emotional farewell to the Queen at her funeral.

The couple were seen interacting with many members of their family, including the Prince and Princess of Wales, and their children, Prince George and Princess Charlotte, who were the youngest guests to attend the funeral, which was held at Westminster Abbey.

The couple’s sweet bond with their young relatives, including their niece and nephew, was evident for all to see during the poignant day.

MORE: Prince Harry and Meghan put united front with the royal family at the Queen’s funeral

In one heartwarming moment outside the church, Charlotte was seen turning around to catch her aunt’s eye, who in return smiled back at the seven-year-old.

Harry also exchanged a smile with Charlotte at St George’s Chapel. The pair were sitting next to each other at the committal service in Windsor.

The Queen’s state funeral was watched by over 4billion people around the world. Her Majesty’s coffin was processed on a gun carriage to the Abbey, pulled by naval ratings (sailors) using ropes. 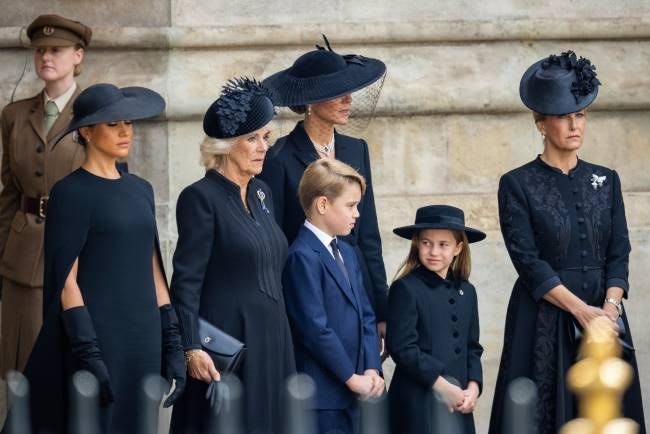 Prince George and Princess Charlotte with their royal relatives, including Meghan Markle

The televised service, which included a national two minutes’ silence, saw King Charles and senior members of the royal family following behind the coffin before the service at Westminster Abbey.

The Sussexes have been in London since the Queen passed away on September 8, and have attended several public events alongside their family during the ten-day mourning period.

This included reuniting with William and Kate on 10 September – two days after the Queen’s death – to view floral tributes at Windsor Castle.

The pair released a touching tribute following the death of Her Majesty which read: “In celebrating the life of my grandmother, Her Majesty The Queen – and in mourning her loss – we are all reminded of the guiding compass she was to so many in her commitment to service and duty. She was globally admired and respected.

“Her unwavering grace and dignity remained true throughout her life and now her everlasting legacy. Let us echo the words she spoke after the passing of her husband, Prince Philip, words which can bring comfort to all of us now: ‘Life, of course, consists of final partings as well as first meetings.'”

The pair are no doubt missing their two young children, Archie and Lilibet, while they are in the UK, and are thought to be returning to the United States very soon to reunite with them.