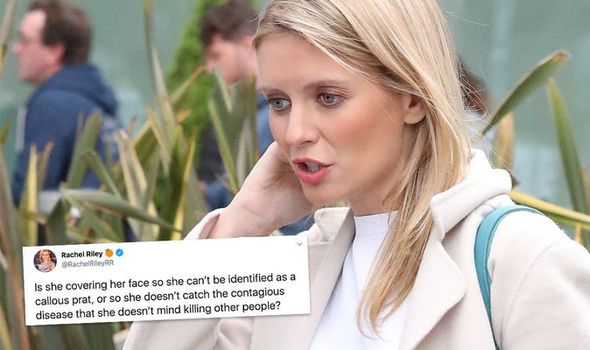 Countdown star Rachel Riley, 34, has slammed an anti-lockdown protestor online after seeing a picture of them with their protest placard.

As lockdown restrictions continue around the world in order to reduce the spread of the deadly COVID-19 virus, people took to the streets in America to demand the economy be reopened as soon as possible.

The “callous” person callled for Governor Bill Lee to open the state of Tennessee immediately.

Last night, Rachel retweeted a post from English comedian and columnist Dom Joly, which included a picture of the protestor.

In the photograph, the woman could be seen holding up a sign with the words “Sacrifice the weak – reopen TN”.

Dom’s Tweet read: “This is what Trump’s America has become – a barking mad, rabid mob of intolerance and stupidity.”

Sharing her thoughts on the matter, the Coutdown star shared the tweet with her own 661,000 followers and referred to the protestor as a “callous prat.”

She wrote: “Is she covering her face so she can’t be identified as a callous prat, or so she doesn’t catch the contagious disease that she doesn’t mind killing other people?”

So far, America has recorded 45,373 deaths from coronavirus, while the UK has reported 17,337 deaths.

Twitter users were outraged by the picture and took to the comments section to share their thoughts.

One user said: “I have read the banner a number of times and I still can’t believe it. That one human being wants to sacrifice the lives of the vulnerable is unbelievable. It needs the decent in society to stand strong against this.”

Another added: “Same language but on a different planet.”

A third remarked: “Oh, that’s just their true colours shining through,” while a fourth said;”She wouldn’t be laughing when it was her own parents or kids.”