Serena Williams‘ three-year-old daughter, Olympia is seriously adorable! The tiny tot’s proud dad, Alexis Ohanian, 37, shared a sweet new snap of her to Twitter on December 20. “Found a random cute photo of @OlympiaOhanian on my desktop and here you go, twitter,” he captioned the happy snap. The toddler rocked a pink Nike tee while standing in front of a staircase with her hands crossed. Her hair was pulled back into two adorable buns, accessorized with two pink pom poms. “Aww she so pretty a cross between Serena and you!! A beauty!!” one follower replied, while another wrote, “love the matching outfits she’s just the cutest.”

The tennis champ has definitely found a mini version of herself in Olympia, as the mother-daughter duo often twin in matching outfits. Just last month, the three-year-old posed on the court with a large racquet in hand. In the November 12 snap, little Olympia rocked a red Nike tennis dress and a matching headband with bow on it. She also wore white sneakers and pulled her hair back into a tight bun.

“Catching all the shade they’re throwing and then some,” the caption hilariously read, and fans couldn’t get enough. “She’s getting so big,” one follower wrote, while another commented, “So cute to see Olympia wear a red Nike dress like the one Serena wore during the summer tournament.” 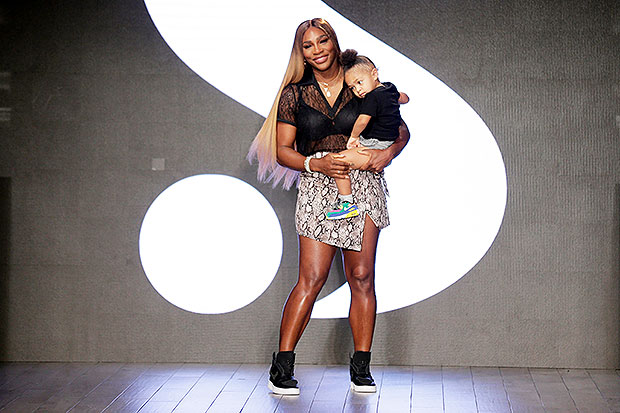 As fans of the world class athlete would know, Serena and her husband Alexis have had a big year. Back in June, the entrepreneur announced his resignation from Reddit, the company he co-founded more than a decade ago. The 37-year-old revealed that he would be stepping down from his board seat and urging his co-workers to hire a Black candidate to replace him. “Having diverse views on any boards is important. So proud of you Alexis,” Serena wrote, adding that he was setting a great example for their daughter. “I know Olympia will be [proud] too.” Talk about a power couple!