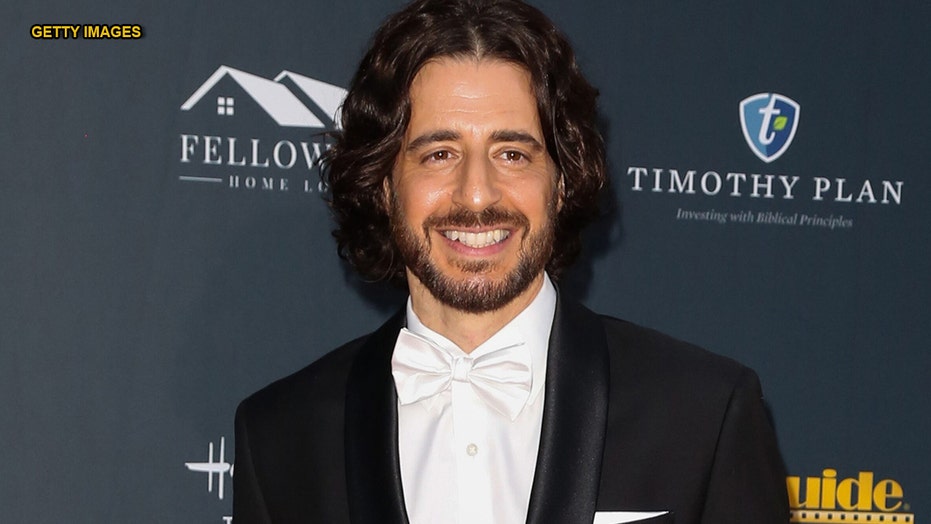 Jonathan Roumie on playing Jesus in ‘The Chosen’

‘The Chosen’ star Jonathan Roumie talks playing Jesus on television and working on a crowdfunded show.

EXCLUSIVE: Jonathan Roumie is more than eager for fans to feast their eyes on Season 2 of “The Chosen.”

Set to premiere on Easter Sunday, the faith-based series recounting the life of Jesus Christ launched in 2019 as a media project with aspirations of bringing the experience of Jesus “in a way it’s never been done before.” It went on to become the largest crowdfunding project after 16,000 people invested over $10 million in the show.

Few knew what to expect from “The Chosen,” which had gone unconventional in its approach to raising production capital but the gamble paid off.

The eight-episode first season, featured through the distributor and across multiple platforms, pulled more than 45 million views and some seven million app downloads in 180 countries – not to mention a 100% on Rotten Tomatoes compared to its 99% audience rating. More than 500,000 more have even purchased the DVD and Blu-ray disc, VidAngel co-founder and CEO said in an interview in August.

Its first season is bingeable enough but “The Chosen” star Jonathan Roumie, 46, said director Dallas Jenkins and everyone who brought the show to life wanted to go bigger in Season 2.

“Everything’s bigger, everything is going to look bigger,” he told Fox News. “So I think that sort of lit this subconscious fire under people’s backsides to kind of make sure that they were on their A-game – not that any of us weren’t before – but it all of a sudden just added another level like, ‘OK, let’s do this,’ and I think it just naturally challenged people to match in performance what the visuals are going to look like for the show. And the world is much bigger and more detailed and more nuanced.”

In going bigger for Season 2 of “The Chosen,” series sought and received permission from the Church of Jesus Christ of Latter-day Saints to use their coveted Jerusalem set — a recreation of the old holy land — considered by many in the film industry as the world’s greatest historical representation complete with a temple to scale. 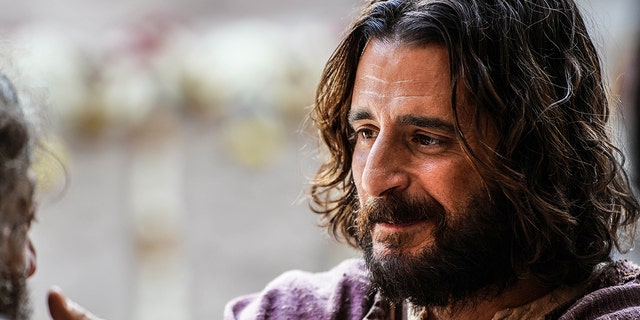 ‘The Chosen’ stars Jonathan Roumi as Jesus Christ.
(Courtesy of ‘The Chosen’)

“I think that the circumstances relating to how we were able to get permission to film there sort of set us up to approach filming, like, ‘OK, we need to be very respectful,’” Roumie said of filming at the hallowed site. “We needed to really be on our game and treat it like a sacred space because nobody had ever done that before. And so we were all very aware that what we were doing was such a privilege and such an exception that we wanted to make sure that we treated it with the care and the love that went into the decision to allow us to even be there. I think that’s how it sort of manifested itself.”

Check out a portion of our extended interview with Jonathan Roumie, condensed for clarity.

Fox News: Will the higher production budget for Season 2 reflect in the show’s visual appeal?
Jonathan Roumie: “Absolutely, yes. Because everything has leveled up on the series this season, from locations to expansion of our cast to even just performances from our fellow cast members, like everybody is just raising their game. And I think it’s because it feels like, ‘OK, we’re [bigger]. And we’re able to do we were able to do more visually, technically ‘cinematographically,’ if I can invent that word, for the sets that we’ve had, because the sets are just these super layered, super deep, enormous sets that we didn’t have access to in season one. So everything has just been pushed to the next level.” 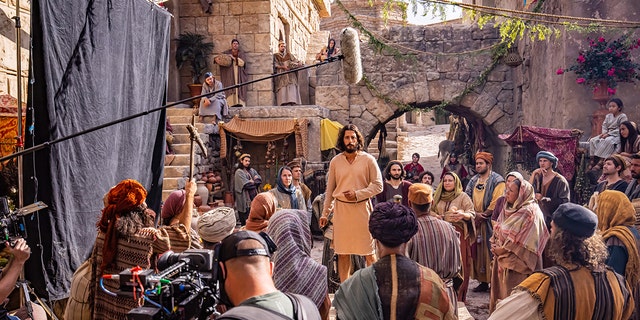 Jonathan Roumie, center, star of ‘The Chosen,’ told Fox News production on Season 2 has been taken to the ‘next level.’
(Courtesy of ‘The Chosen’)

Fox News: The show addresses the Sermon on the Mount in Season 2. How did you manage to film such a large scene in Midlothian, Texas with thousands of fans as extras while adhering to coronavirus filming regulations?

Roumie: The amount and the level of care that the production took to ensure everyone’s safety, first and foremost was on some level unprecedented. I mean, as you may have read, we had almost 3000 people show up to participate in the Sermon on the Mount. In order to do that, everybody has to submit ahead of time, days ahead of time, and proof of a negative PCR coronavirus test, which are the gold standards for testing.

Everything has leveled up on the series this season, from locations to expansion of our cast to even just performances from our fellow cast members, like everybody is just raising their game.

And then, when they showed up on sets – whether they drove or flew or whatever – they had to stop at this checkpoint, this local high school football field and take a rapid test. And if any person in a car tested positive, no one in the car could enter. The car had to be turned around. And people knew this ahead of time. And it was the risk that they took and out of around 2,800 people, I think less than 10 cars had to be turned away, which is phenomenal. And the rest of them were admitted and it was rigorous.

I mean, there were children, there were adults and there were elderly people that were so pumped to be at this recreation of the Sermon on the Mount that nothing was going to stop them. And, you know, in recognition for not only their financial sacrifice but they were essentially granted the permission to be a part of the scene as part of as an investment kind of opportunity if you invested into the project at a certain level. 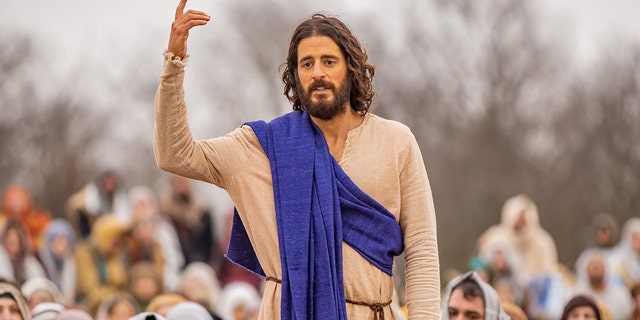 ‘The Chosen’ star Jonathan Roumie appears in a scene from Season 2.
(Courtesy of ‘The Chosen’)

It was with the tactical precision, worthy of any kind of military endeavor, the fact that they pulled this off and it was months and months and months in the planning. And what we didn’t plan for was whether, you know, whether it was a huge factor and it was 20 degrees and it was damp and it was drizzling at times. And the fans of the show who were a part of the crowd were unbelievable troopers.

Fox News: How does the show appeal to those who perhaps are still exploring religion or in current search of their faith?
Roumie: Absolutely – and I do also want to say one thing because it’s hard for me to talk about this project and not talk about the integral part that faith plays in my own life personally and with regards to this role. But I do want to say for anybody that might be reading this that isn’t of a particular faith persuasion – that they maybe haven’t decided – what makes this show and what I think will continue to make the show kind of universally admired and watched by people of all different walks of life all over the world is the fact that at the end of the day, as a filmmaker, as storytellers, as actors participating as storytellers in this process, we want to tell a good story.

It has to be a good story. So people that might not be comfortable with the idea of watching, quote-unquote, religious or faith-based projects, don’t have to think of this project as only being for somebody who believes in God or who is Christian or whatever. 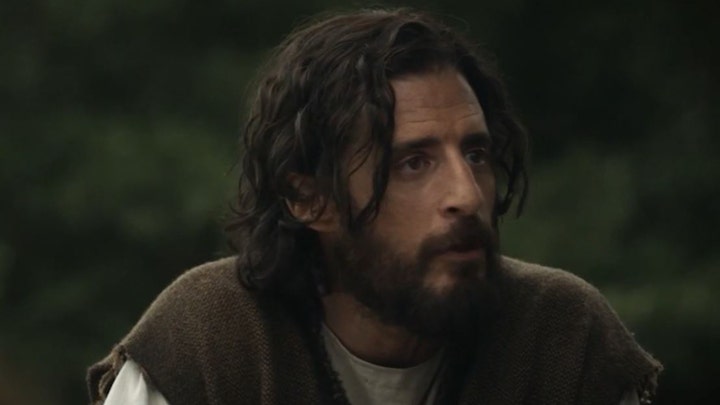 This should be watched for anybody that is fans of historical dramas, anybody that’s a fan of well-researched historical productions. And if you like period pieces, if you like, well-made shows, well-written shows, this is going to appeal to so many people. And I think that they can get past the idea of like, ‘Oh, it’s a faith show and it’s not for me,’ You don’t have to [believe in God]. There’s no prerequisite. This is going to appeal to people beyond the faith spectrum. And it has.

Fox News: Remove your humble hat for a second. Where do you place yourself on the rankings of top Jesuses of all time?
Roumie: [Laughs] There’s no way I can answer that question. I’d have to plead the fifth.

Season 2 of “The Chosen” begins streaming on April 4 on the VidAngel app.