Queen Elizabeth II has had a rough year. Her grandson, Prince Harry, and his wife lambasted the royal family in a historic television interview. Then, only one month later, she said goodbye to her husband of more 70 years, Prince Philip, after he died at home. And that’s beside Prince Andrew and his seemingly neverending scandals that threaten to blow the monarchy to smithereens. At 95 years of age, most nonagenarians are long retired and enjoying their favorite hobbies and grandchildren. However, the queen isn’t most people, and her sense of duty demands that she serves her country to the very end.

Yet, while some believe Prince Harry and Meghan Markle seemingly abandoned their royal duties when they left the United Kingdom in 2020 to make a fresh start for themselves, it appears hey may have a soft spot for the queen. After all, they named their daughter after her. Per Archewell, Lilibet Diana was named after her great-grandmother, whose family nickname is Lilibet, and after her paternal grandmother, Princess Diana. If nothing else, Meghan and Harry wanted the little girl to have some ties to her royal heritage, even if only in name.

Sadly, Lili and Archie may never experience what the other royal great-grandkids take for granted, especially now that the Atlantic divides them. Here’s what Princess Diana’s youngest grandkids may be missing out on.

Prince Harry and Meghan Markle are missing out on making memories 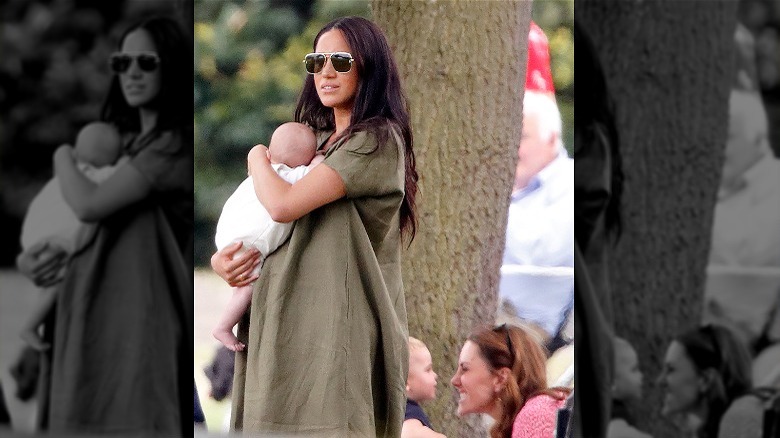 Queen Elizabeth II may be Great Britain’s reigning monarch, but she’s also a mother, grandmother, and great-grandmother. She has a delicious sense of humor, per the Daily Mail, and her impressions are second to none. In fact, Prince Harry apparently once warned Meghan Markle not to try and outdo his grandmother at charades when the family came together for Christmas at Sandringham, per Express.

According to Vanity Fair, Prince William, Kate Middleton, and their three children joined the queen at Balmoral estate over the British Bank Holiday weekend. “They always enjoy going up to Balmoral, they love the outdoors and walking in the hills and spending quality time with family. It’s where William spent a lot of his childhood and it’s important to him that his children experience what he did as a young boy,” an insider said.

Apparently, the queen reserves the last weekend in August for her grandchildren and great-grandkids, per the outlet. The source continued, “It has become a tradition in recent years that the Bank Holiday weekend is the final family get together before Christmas and everyone is invited. In the past, it has turned into one big sleepover with lots of the Queen’s grandchildren and great-grandchildren. Her Majesty enjoys it immensely.” Since Harry, Meghan, and their children now live in the U.S., they seem to be missing out on creating new memories with Queen Elizabeth II, who’s definitely not getting any younger.