Kicking off 2021 by (virtually) revamping your look has never been easier, thanks to the plethora of appearance-changing filters on social media. If you’ve ever wondered what you’d look like as a Disney princess or your favorite Pixar character, this roundup of Cartoon Face Filters on Snapchat and Instagram includes viral lenses that offer a seamless transformation into an animated avatar. Here are some of the best ones out there.

As always when trying out one of Snapchat’s lenses, you’ll have to open the app and head to the Lens Carousel located at the bottom of the front-facing Snap Camera. If you don’t see the lens you want to use in the Lens Carousel, you can search for the effect you want by tapping the magnifying glass icon in the top left of your screen and typing in the name of the lens. From there, you should see the cartoon effect you’re looking for as well as a list of other similar options. Tap on the one you want, and voila, you might as well be an extra from Frozen.

Meanwhile, if you’re searching for a filter on Instagram, you’ll need to open your app and head to your Story Camera, where you should see a carousel of filters you’ve saved as well as suggested effects. Swipe left through all the filters until you see the option to "Browse Effects." Once you tap on the Browse Effects button, you’ll be taken to the Effects Gallery with tabs of your saved effects as well as trending ones. Tap the magnifying glass in the righthand corner to search for the filter you’re looking for either by the name of the effect or the creator. Once you select the one you want, you’ll be able to try it, save it to your camera for later, or share it with your friends.

Snapchat’s Cartoon Effect lens, which launched back in December, is a weirdly realistic rendering of what you’d look like as a cartoon. In addition to good attention to detail, the lens is pretty spot-on at mimicking your expressions. 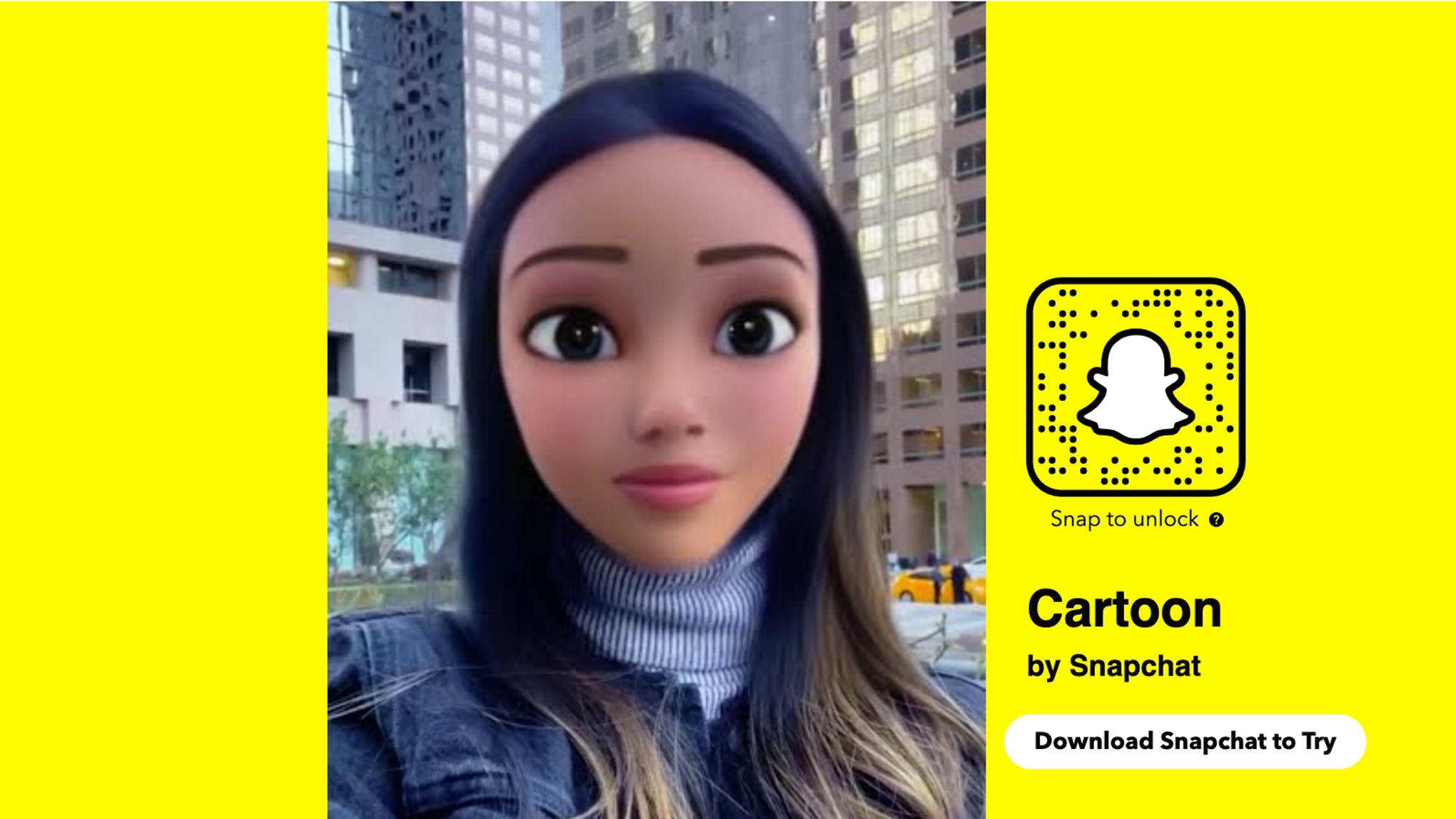 This Snapchat lens, which can be successfully used on both humans and animals, swaps out your eyes and eyebrows for ones that look like they belong in a Disney animated classic.

Snapchat’s Anime Style lens, which makes over your features in an anime-style of animation and follows your expressions in real time, has been a popular offering since it was released in September 2020. 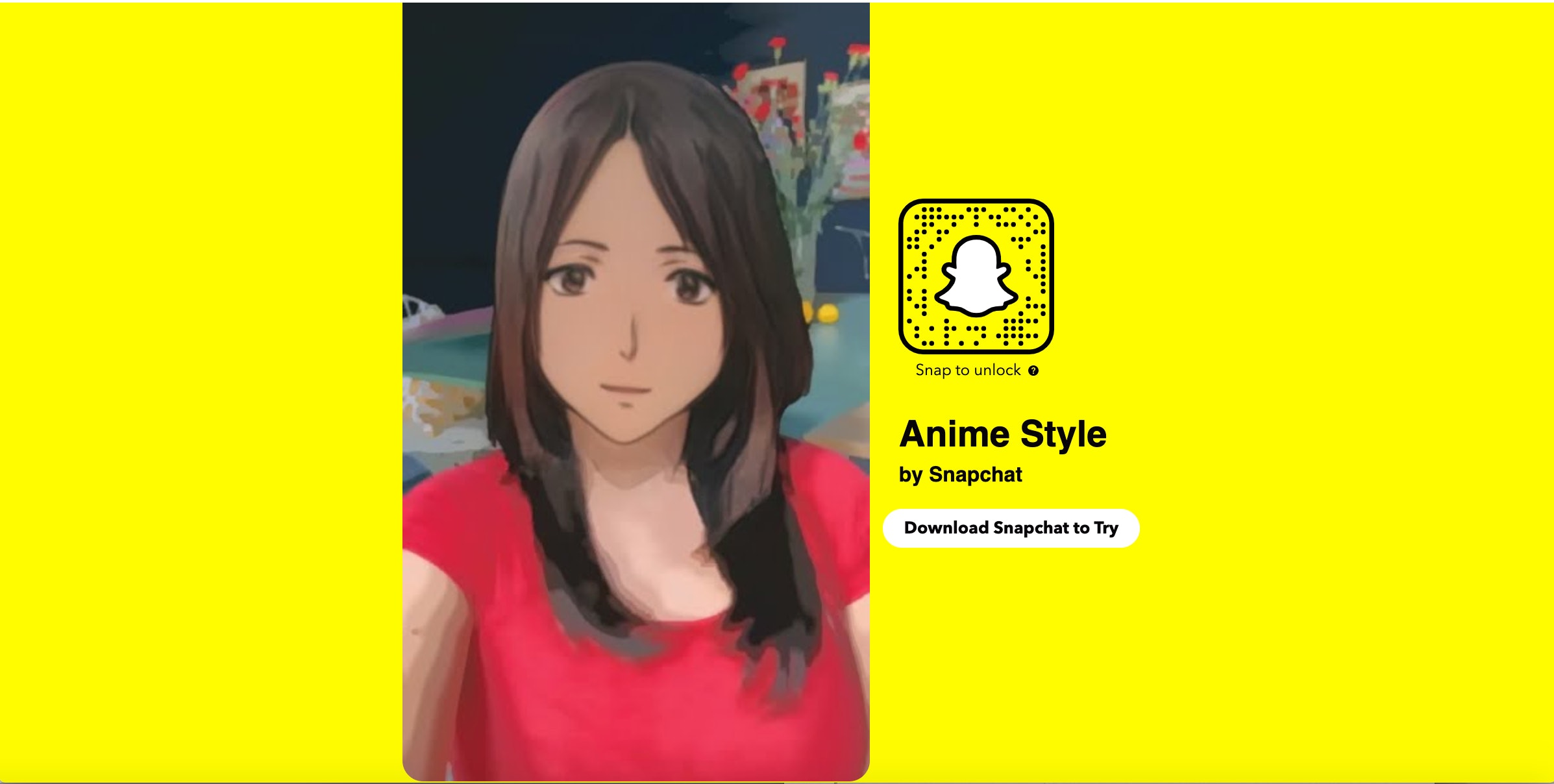 Since dropping in August, the Instagram Cartoon Princess Lens from popular filter creator @paigepiskin has inspired countless Instagram users to cosplay as their favorite Disney princess or character. The filter, which allows you to play around with your eye color and rosy cheeks, also contains sparkles for some extra magic.

Christmas might be over, but you can channel your inner Grinch with a surprisingly realistic Cartoon Grinch lens from @triutra. The effect gives you green hands and a green face as well as green hair that sticks straight up. 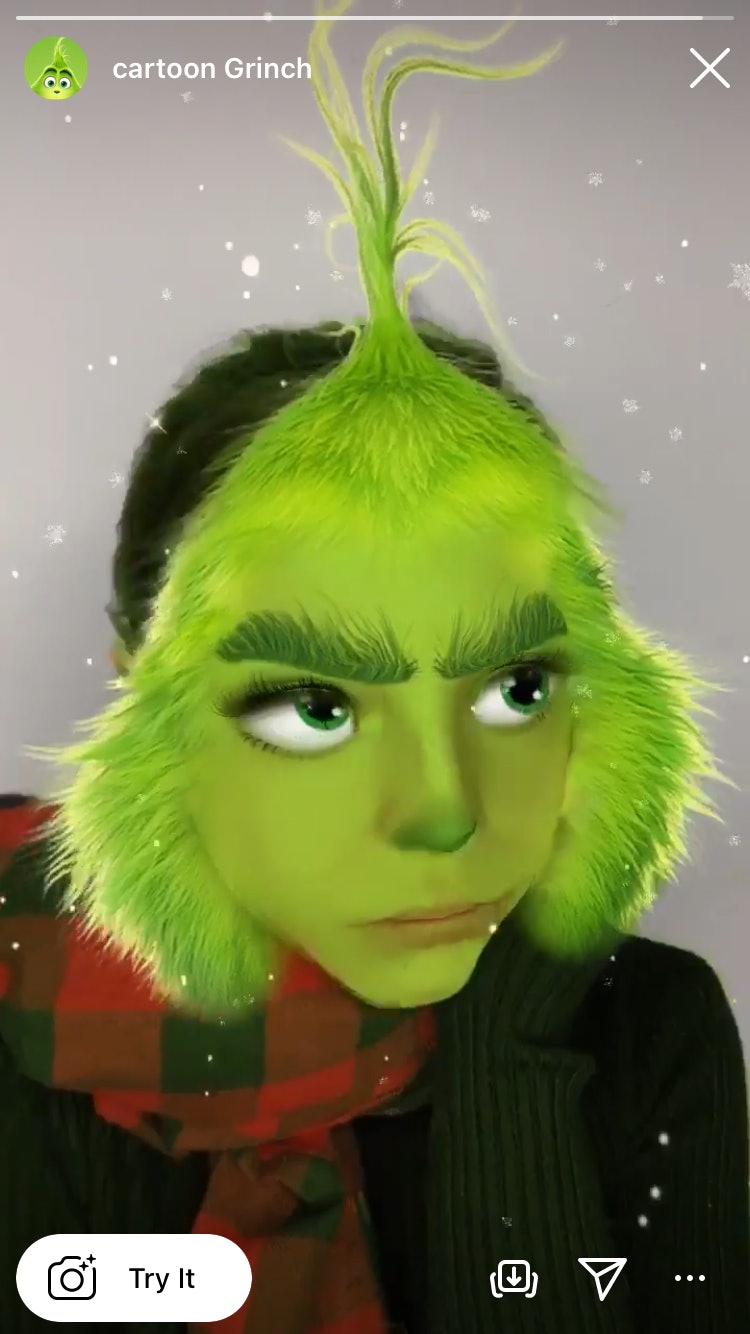 Similar to Snapchat’s Anime lens, this Instagram Cartoon effect from @anitaind transforms you into a more simple animation without any exaggerated features.

Also from @paigepiskin, this Catwoman lens transforms you into into the comic character with a vintage style of animation.

Channel your inner Princess Jasmine with this Instagram filter from @elya.boz, which, with one tap of your finger, gives you the Aladdin leading lady’s blue crown and signature features.

These are just a few of the countless animation-inspired filters on Snapchat and Instagram to try out, so have fun trying these ideas out and browsing through your favorite apps for more options.