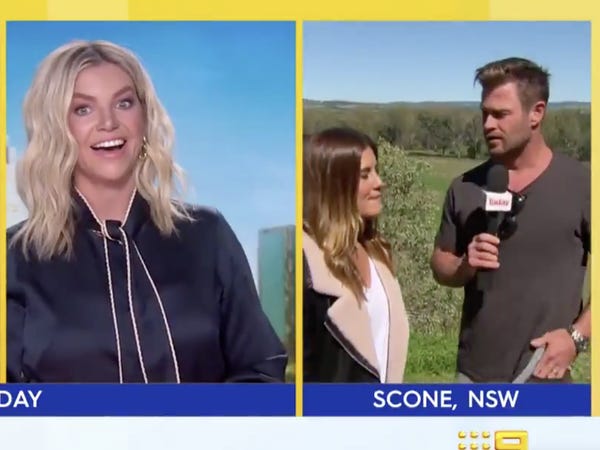 Last week, Thor-actor Chris Hemsworth stunned the hosts of a local Australian morning show "Weekend Today" by turning up to help give the local weather forecast.

As reported by ET Canada, field reporter Lauren Phillips was doing a live broadcast from Scone, Australia, when Hemsworth came into the background of the shot and then walked up to her. It appears as though Phillips was in on the joke, hoping to surprise hosts Rebecca Maddern and Richard Wilkins back in the studio.

Maddern's jaw literally dropped when she realized Hemsworth was not only there, but about to read the weather report.

"I heard you're talking about looking for some horses," Hemsworth said when he first grabbed the microphone. "There's a bunch down here actually, which I've noticed in the paddock. What're you doing?"

Phillips said she was about to do the weather for "The Today Show" and the "Weekend Report," and then asked Hemsworth if he'd like to help her out.

He promptly took a sheet of notes from Phillips and proceeded to read off the weather forecast with his own added commentary.  "Sunshine Coast, a shower or two, maybe get a raincoat ready there," Hemsworth said.

"Get your brollies out as well, I reckon," he said (referring to umbrellas) after seeing the forecast for Melbourne.

"Adelaide, rain at times," he read off the paper. "Can't tell you exactly what time, but there will definitely be rain at some point."

The segment made the rounds on Twitter almost a week later when a fan account reposted the segment.

At the end of his stint as a weather reporter, Hemsworth mimicked a horse trot as he walked off-camera.

"Did that just happen?" the show's co-host Rebecca Maddern said in shock back in the studio when it was all over. "He just read the weather on 'Weekend Today.' My year made!"

Hemsworth, who is from Australia, said he was in the area visiting some people from Aussie Ark, an organization doing conservation work to help protect ecosystems and endangered wildlife on the continent.