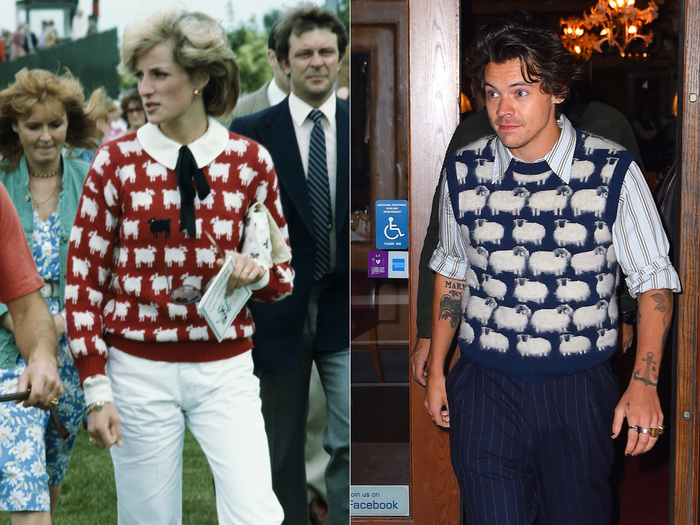 Princess Diana wore a velvet gown to a gala dinner at the White House in 1985. Angelina Jolie later channeled the iconic fashion moment at the 2018 BAFTAs. 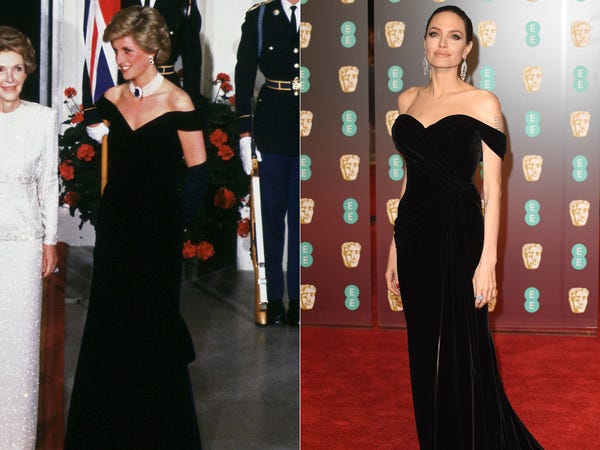 Princess Diana first wore this Victor Edelstein dress in 1985. It became known as the "Travolta dress," as it's what she was wearing when she famously danced with the "Grease" actor at the gala. She paired the gown with a pearl and sapphire choker and matching earrings.

In 2018, Angelina Jolie channeled the late royal in a Ralph & Russo gown with an asymmetrical sweetheart neckline. Jolie accessorized the look with chandelier earrings.

In 1990, Princess Diana made history when she wore a pants at an evening engagement. Throughout her royal career, Meghan Markle also had an affinity for wearing suits. 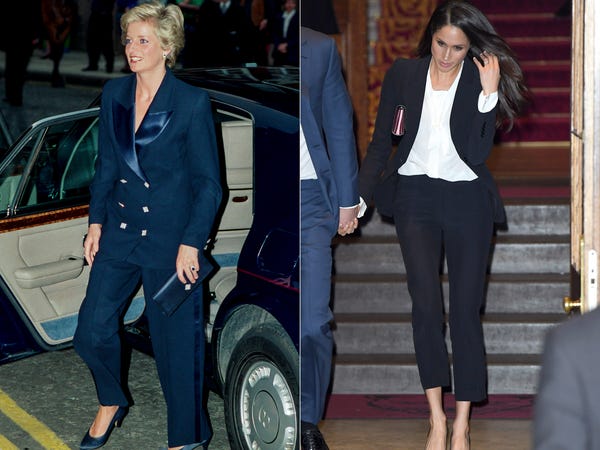 As Elizabeth Holmes wrote in "HRH: So Many Thoughts on Royal Style," Princess Diana became the first female member of the British royal family to be photographed wearing pants to an evening event.

Meghan Markle seemed to take a cue from her late mother-in-law's style. In 2018, Markle arrived at her first evening function as a member of the royal family wearing a black Alexander McQueen suit.

"The black trouser suit got a lot of attention because it's something we haven't seen from the royal family since Diana," Holmes told Insider. "It sends a very strong message that Meghan understood this was a job and she was showing up to work."

Model Emily Ratajkowski said in a 2019 interview that she looked to Princess Diana as her style inspiration. 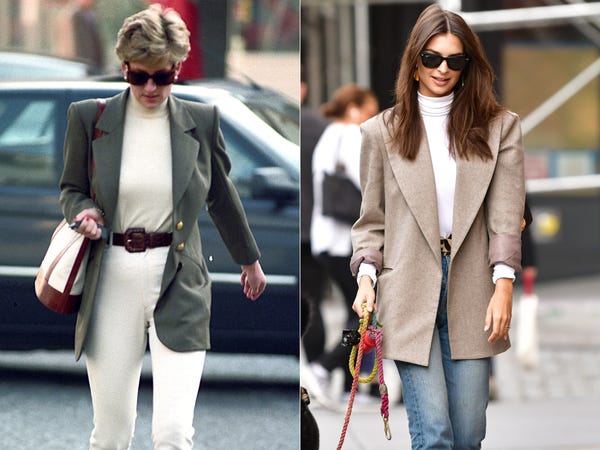 In one of her iconic street style moments from 1994, Princess Diana is pictured wearing a gray blazer with a white turtleneck, white pants, a belt, and loafers.

Model and actress Emily Ratajkowski appeared to draw inspiration from Princess Diana's off-duty look in 2019 when she was photographed in an oversized blazer, white turtleneck, animal print belt, and leather booties.

Ratajkowski also told Us Weekly in 2019 that she was "thinking about" the late Princess of Wales' style.

"I'm trying to go '80s and have been thinking about Princess Diana's street and ready-to-wear moments, like a blazer and a bike short and a big sneaker," Ratajkowski told the magazine. 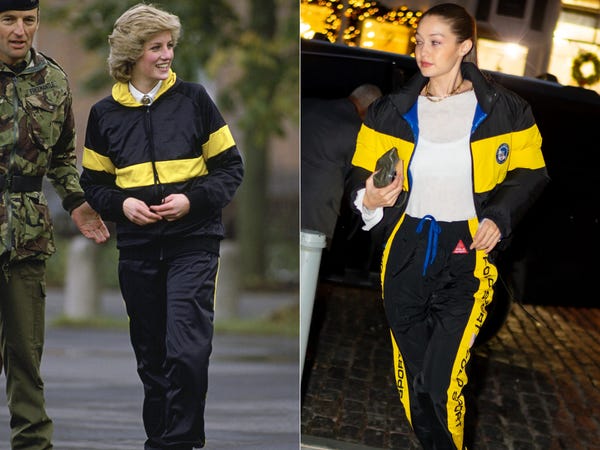 For a 1985 visit to The Regiment in Berlin, Germany, Princess Diana wore a black-and-yellow tracksuit with white sneakers.

Gigi Hadid seemed to pay homage to Ladi Di with one of her athleisure looks. The model was photographed in 2019 wearing a black-and-yellow Ralph Lauren look with a white T-shirt and sneakers.

Hailey Bieber has channeled Princess Diana's casual looks and spoke to Vogue Paris in 2019 about her affinity for the late royal's style. 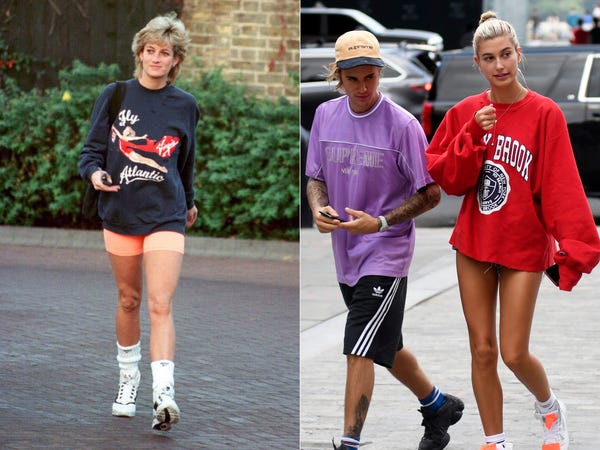 One of Princess Diana's most notable casual looks included a graphic sweatshirt and bright-orange biker shorts, which she was pictured wearing in London in 1995. According to Vanity Fair, Diana's Virgin-Atlantic pullover sold at auction in 2019 for $53,532.

In 2018, Hailey Bieber (née Baldwin) was pictured in a Lady Di-reminiscent look: a bright-red collegiate sweatshirt, shorts, and white sneakers.

Bieber's apparent affinity for Princess Diana's style was solidified when she starred in a 2019 Vogue Paris feature re-creating some of the late royal's iconic looks.

"I think she is so gorgeous, so effortless, she was everything. I feel like a lot of personal style is so similar to this, with the athletic, everyday wear. I love being comfortable, I love being sporty," Bieber told Vogue Paris of the late Princess Diana.

In 2019, Harry Styles wore a sheep-print vest that was compared to Princess Diana's famous sweater. 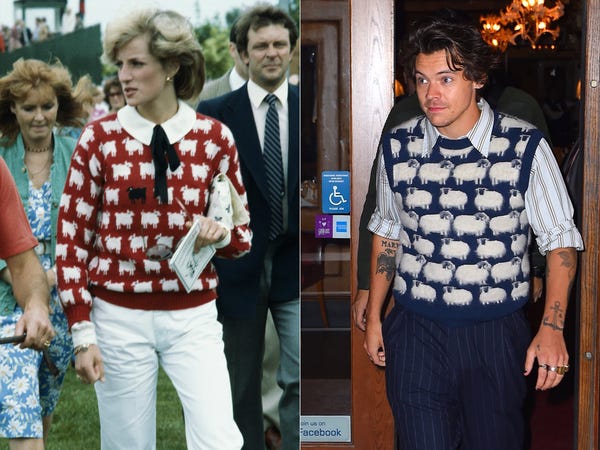 After a rehearsal for his 2019 "Saturday Night Live" appearance, Harry Styles was photographed wearing a sheep-print sweater vest from Lanvin's Spring/Summer 2020 collection.

Many people think Princess Diana's sweater — which included one black sheep — was sending a message about where she stood in the royal family at the time. 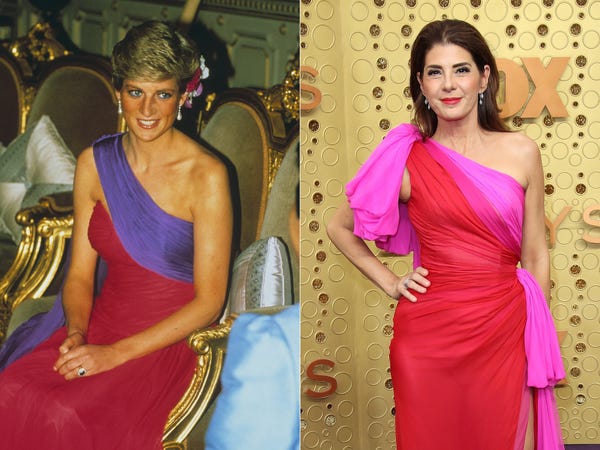 Marisa Tomei seemed to pay homage to one of the late Princess of Wales' iconic looks when she arrived at the 2019 Emmy Awards wearing a Ralph & Russo couture gown.

Meghan Markle also made a nod to Princess Diana's affinity for color-blocking. 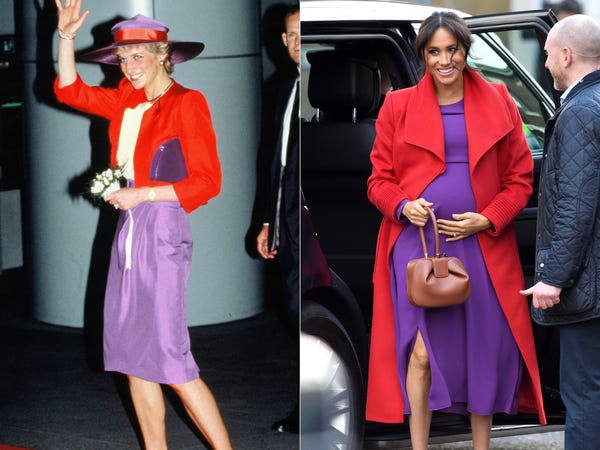 During a visit to Hong Kong in 1989, Princess Diana wore a red-and-purple outfit from Catherine Walker and a matching wide-brim Philip Somerville hat.

In 2019, while pregnant with baby Archie, Markle channeled her late mother-in-law with a red wrap coat by Sentaler, a purple Aritzia dress, Stuart Weitzman pumps, and a Gabriela Hearst bag. 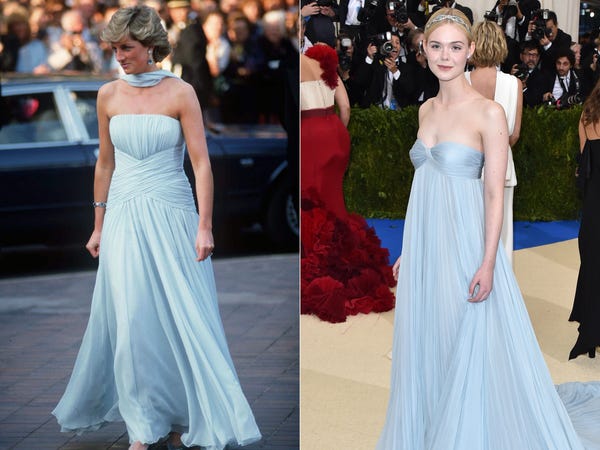 For the Cannes Festival's 40th anniversary in 1987, Princess Diana wore a dress by one of her favorite designers, Catherine Walker. She attended the event in a powder-blue chiffon gown with a matching scarf and aquamarine and diamond jewelry.

Actress Elle Fanning seemed to go for a similar ethereal style at the 2017 Met Gala, where she wore a strapless, light-blue Miu Miu dress.

Rihanna, who has spoken of her appreciation for Princess Diana's style, seemed to channel one of the late royal's dark-colored outfits in 2015. 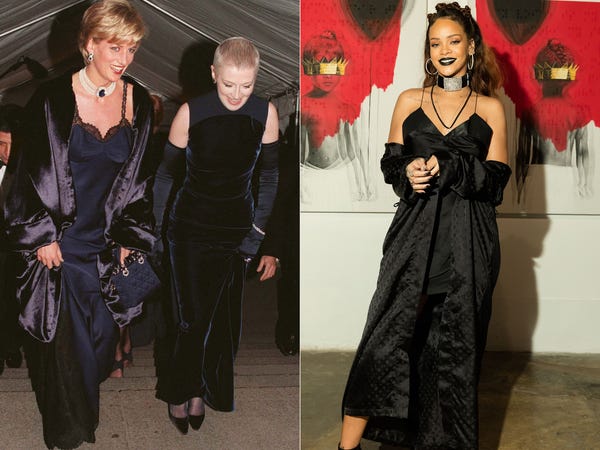 At her Met Gala appearance in 1996, Princess Diana wore a navy Dior slip dress with lace trim, accessorizing the now-iconic piece with a pearl choker.

Rihanna seemed to channel the late royal's look with an outfit she wore to the artwork reveal for her "Anti" album in 2015. The artist wore a black slip dress and a matching coat and an oversized choker.

The "Disturbia" singer has shown her apparent love for Princess Diana's fashion in other ways, too.

In 2016, Rihanna was pictured wearing a T-shirt with Princess Diana's face printed on it. And in 2017, she told Vogue Paris that she admired Diana's "revenge dress," which was her off-the-shoulder black gown designed by Christina Stambolian.

"Whether her choice of this knockdown dress was conscious or not, I am touched by the idea that even Princess Diana could suffer like any ordinary woman. This Diana Bad B*tch moment blew me away," Rihanna told Vogue Paris.