Simone Biles Opens Up About Her Relationship with Boyfriend Jonathan Owens: 'I Just Love Him' 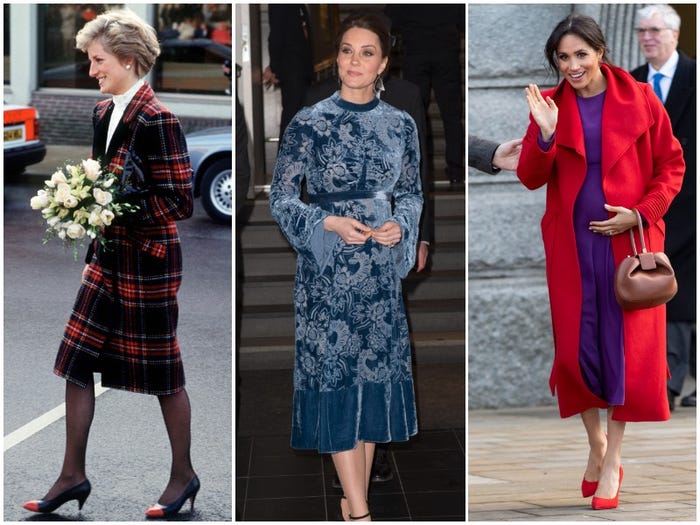 Here are some of the royal family's best winter looks.

The day she announced her first pregnancy in November 1981, Diana wore a coat designed by Bellville Sassoon and a hat by John Boyd. 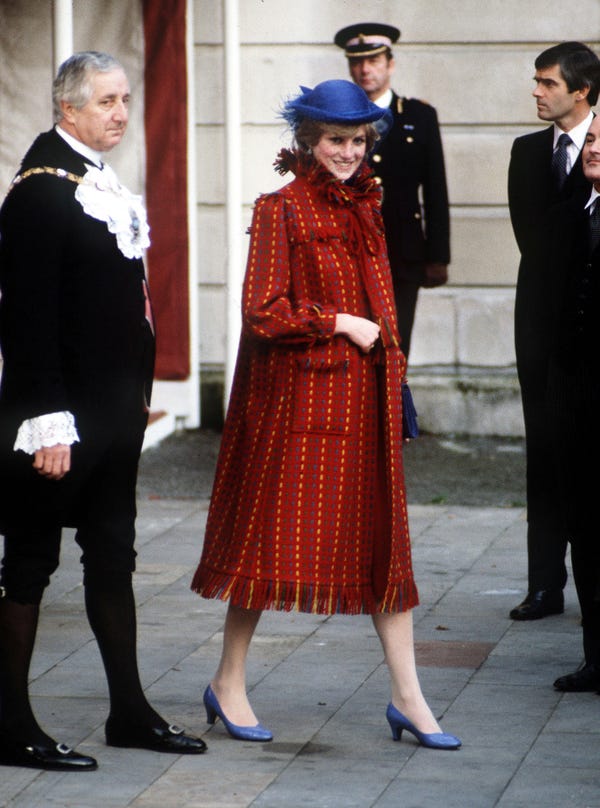 She finished off the elegant outfit with blue heels that matched her hat.

She wore a striped Gina Fratini dress with a velvet jacket in February 1985. 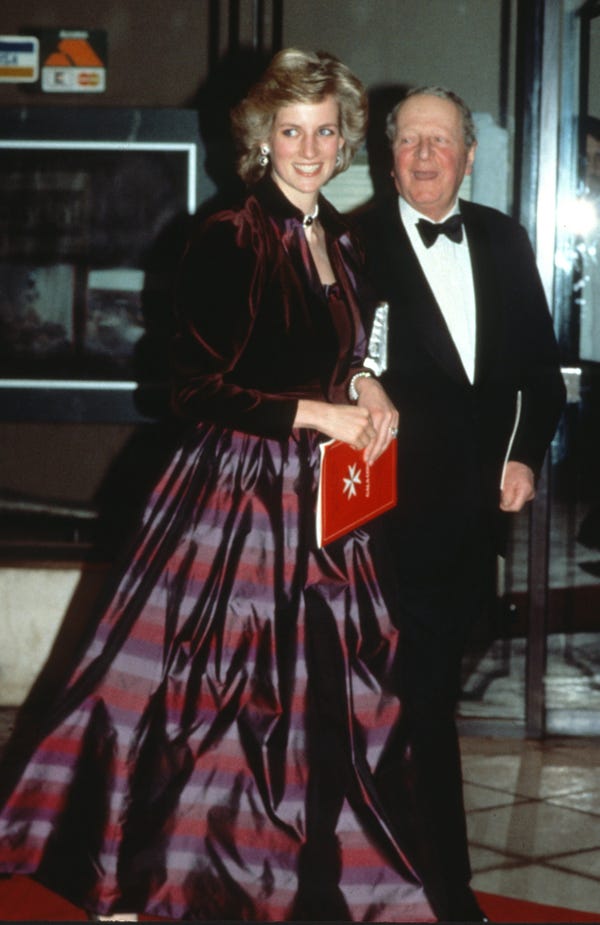 Princess Diana wore the gown to a concert at St. David's Hall in Cardiff, Wales.

Princess Diana wore this trendy yellow and black outfit by Escada in November 1987. 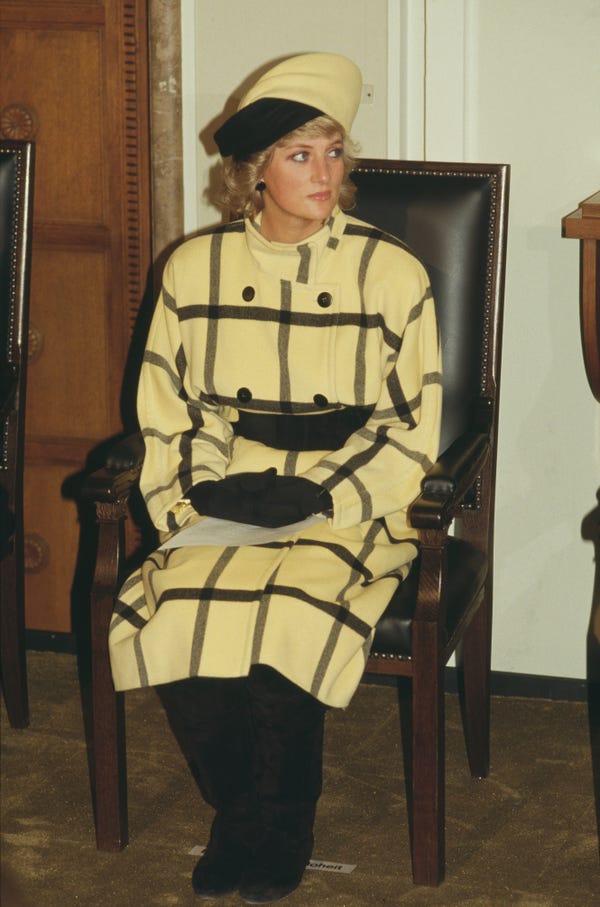 She wore the outfit to a ceremony at the Rathaus in Berlin, Germany. Today, plaid coats and jackets endure as a popular winter look.

She wore a daring orange tuxedo look with a black bustle skirt in February 1987. 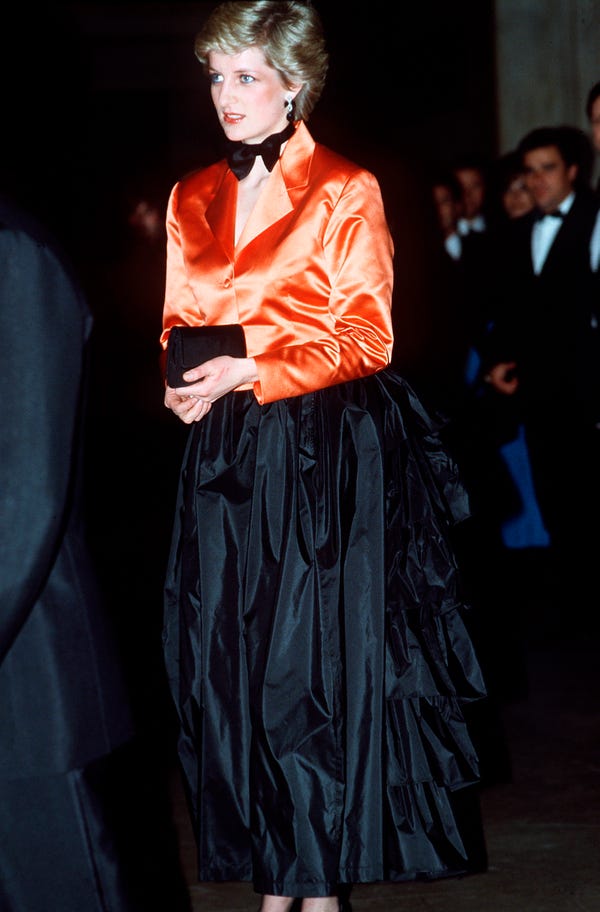 She wore the outfit during an official visit to Lisbon, Portugal. 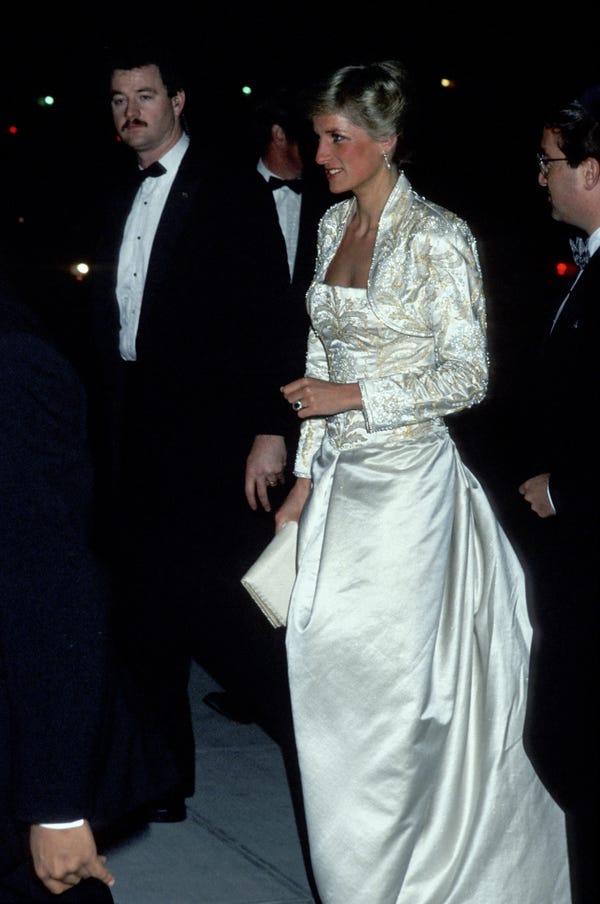 She wore the outfit to the "Winter Garden" opera.

This tartan coat worn by Princess Diana in February 1990 wouldn't be out of place in stores today. 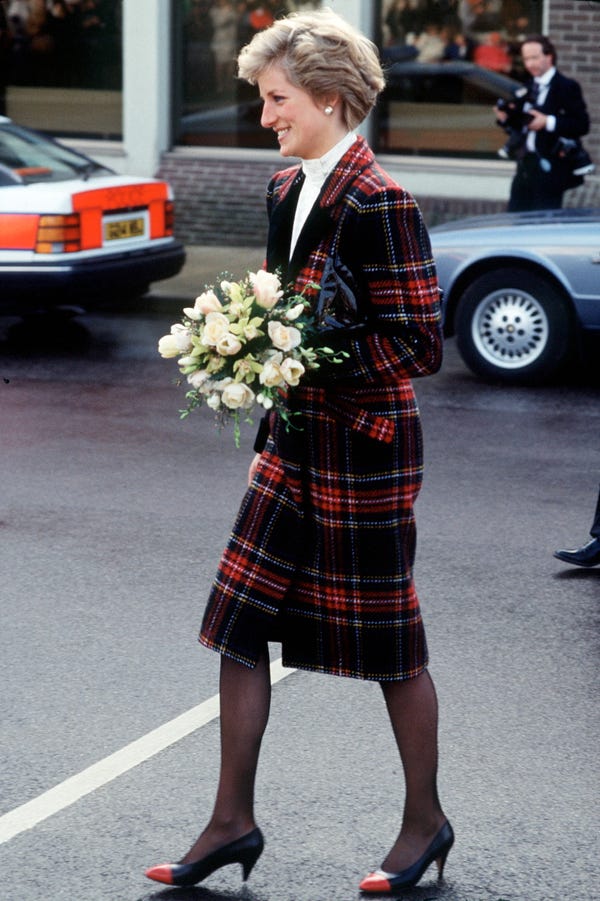 Diana wore the look, paired with red and black heels, while visiting Ipswich in Suffolk.

Middleton, whose flawless coat selections are well-documented, was visiting the Stephen Lawrence Centre in London.

She wore a Miu Miu coat embellished with gold buttons and a black velvet collar to the royal family's 2017 Christmas Day service. 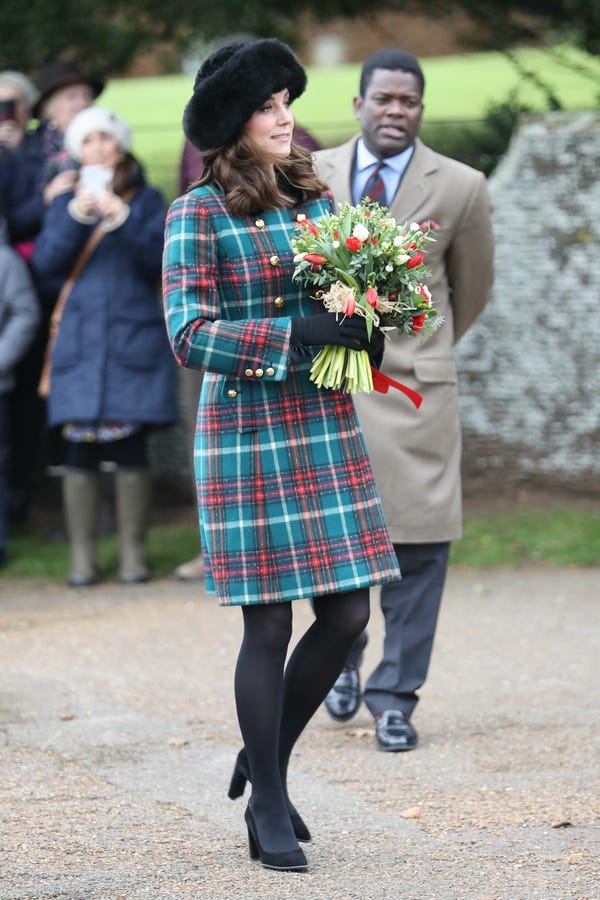 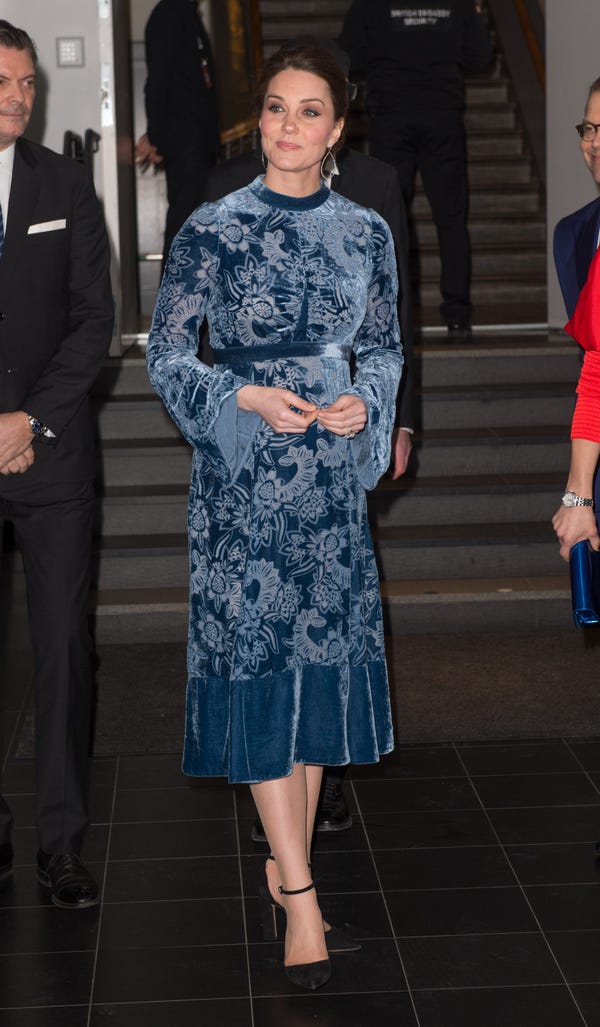 She wore the dress to a reception to celebrate Swedish culture at the Fotografiska Gallery in Stockholm.

Middleton looked chic in a periwinkle Mulberry coat with a pair of navy heels while visiting Northern Ireland in February 2019. 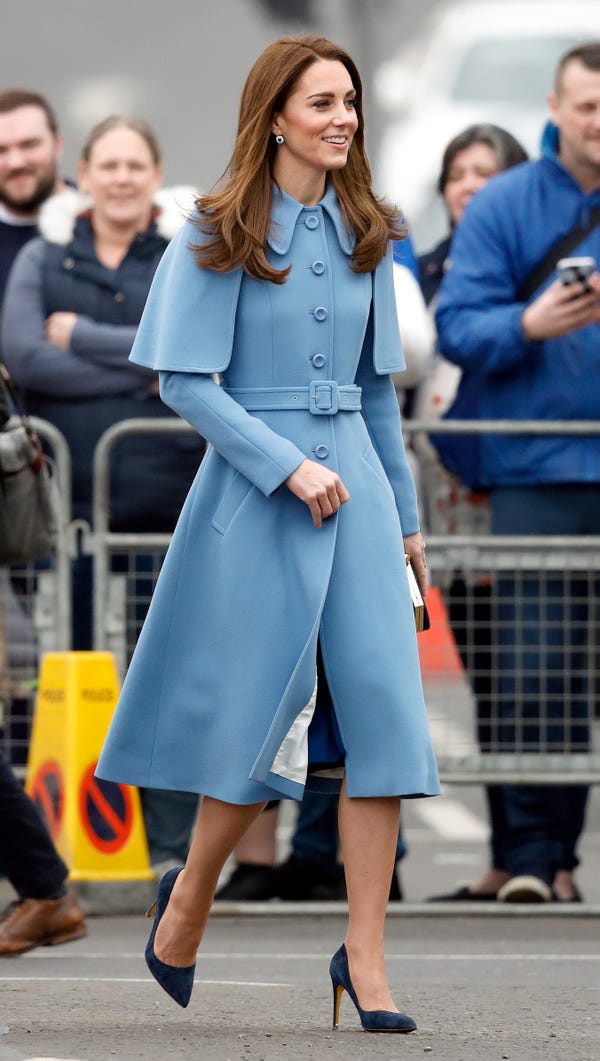 The belted coat had cape-style sleeves.

She has reworn this red Catherine Walker coat several times.

She most recently wore it in March 2020 to the royal family's Commonwealth Day services at Westminster Abbey, but it's also the perfect color for holiday celebrations. 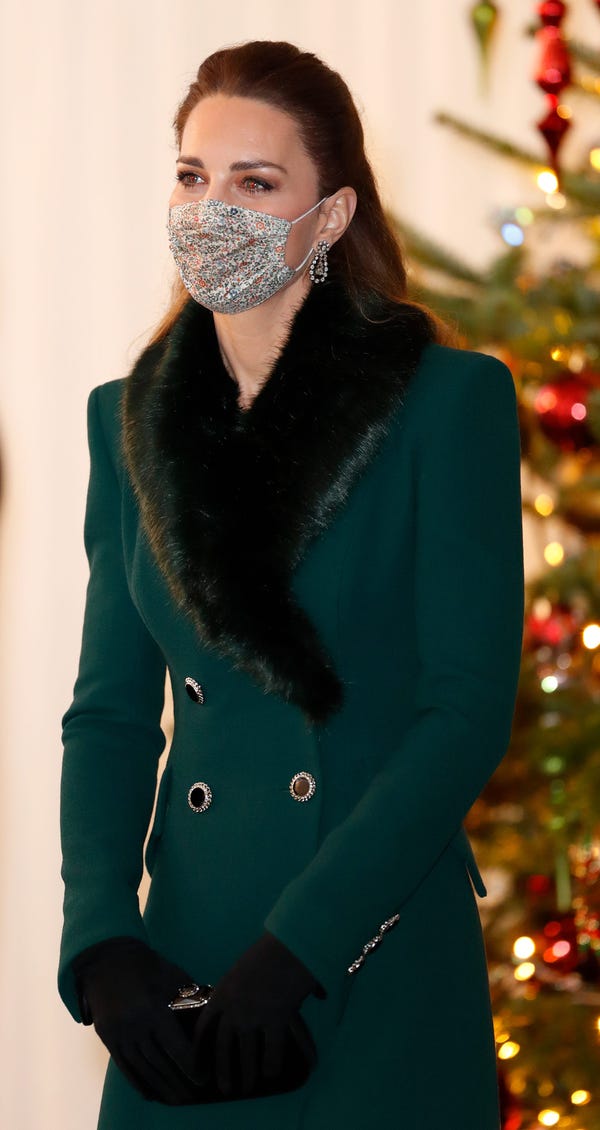 Middleton wore the coat as she thanked local volunteers in Berkshire.

Prince William looked smart in a burgundy and navy winter look during a walkabout in Bradford in January 2020. 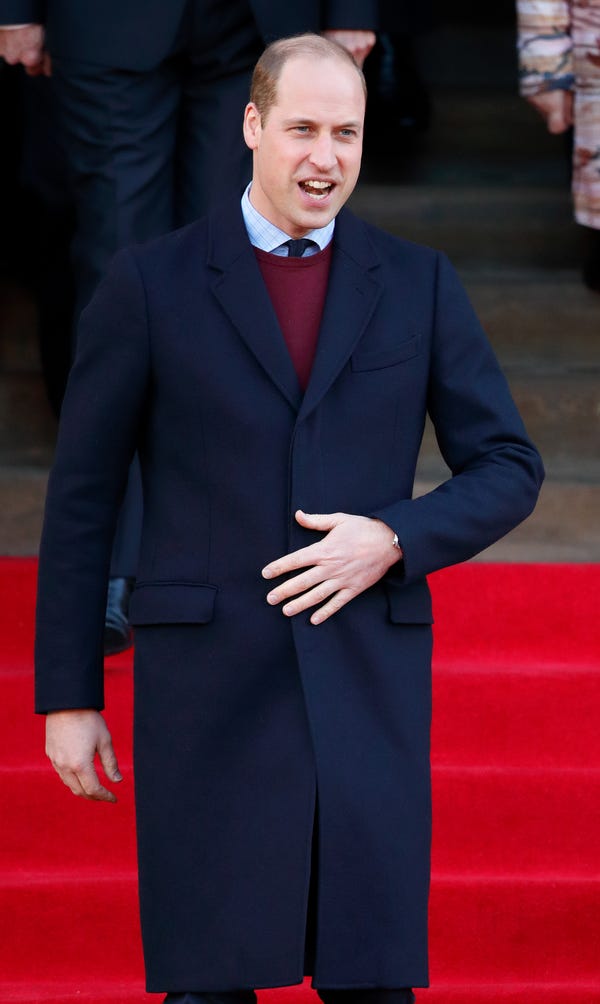 The Duke of Cambridge wore a navy coat and tie with a burgundy sweater and a light blue checkered shirt.

While Kate Middleton wore another classic tartan coat, Prince William dressed up his navy jacket with a patterned scarf. 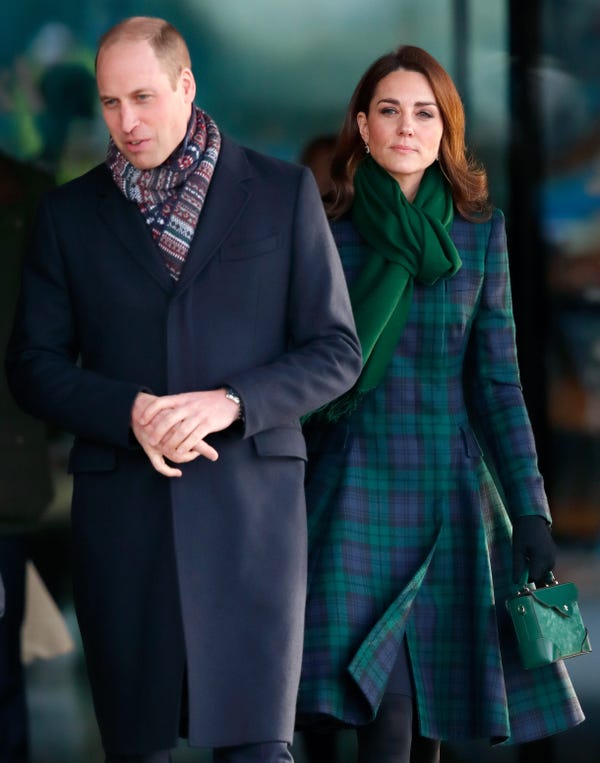 The couple was visiting Scotland and attending the opening of the Dundee museum in January 2019.

He paired a charcoal grey jacket with a purple tie for another smart winter look in March 2013. 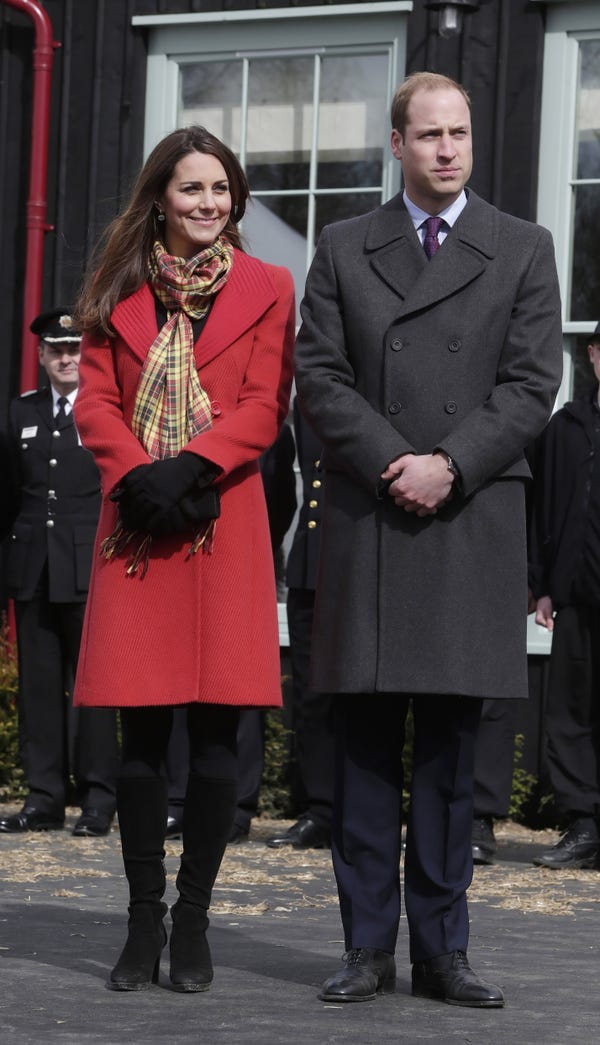 Prince William wore the outfit on a visit to Dumfries House in Ayrshire, Scotland.

For her first Christmas with the royal family in 2017, Meghan Markle wore a stylish $1,495 camel-colored tie coat by Sentaler. 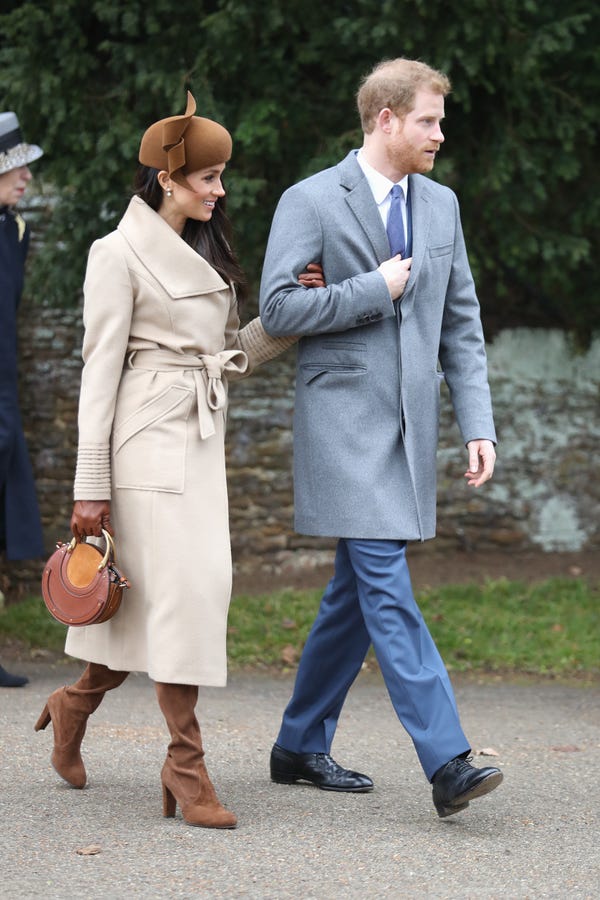 She wore the coat with brown suede boots, a matching hat, and a tan and red Chloé bag.

Markle chose a Burberry double-breasted tartan coat as a nod to Scotland while visiting in February 2018. 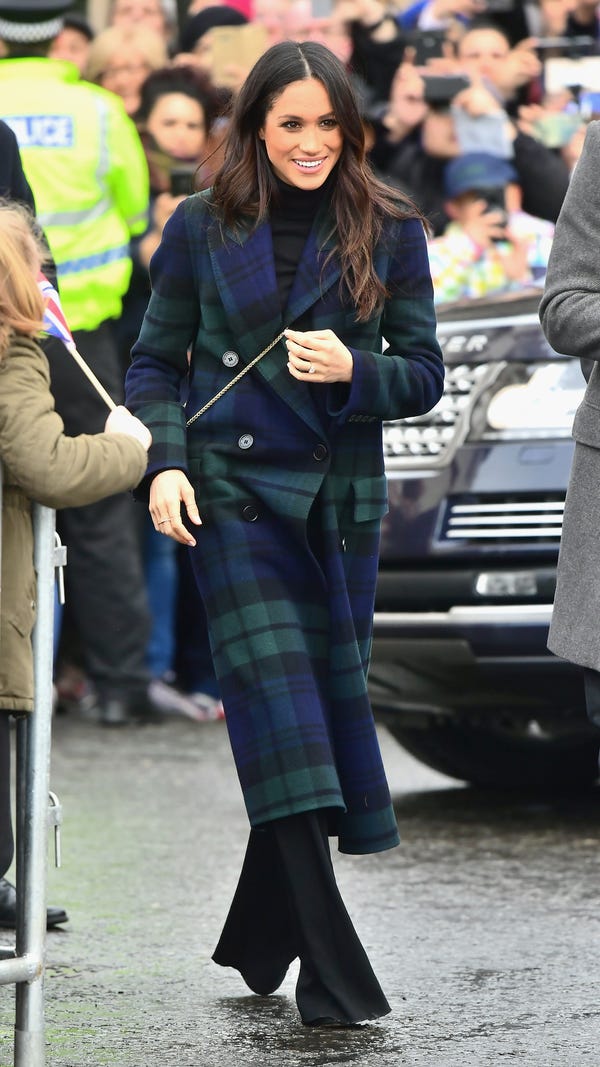 Markle brought her winter fashion sense to her maternity wardrobe with a floral-printed midi dress by Brock Collection and a gray coat by Soia & Kyo. 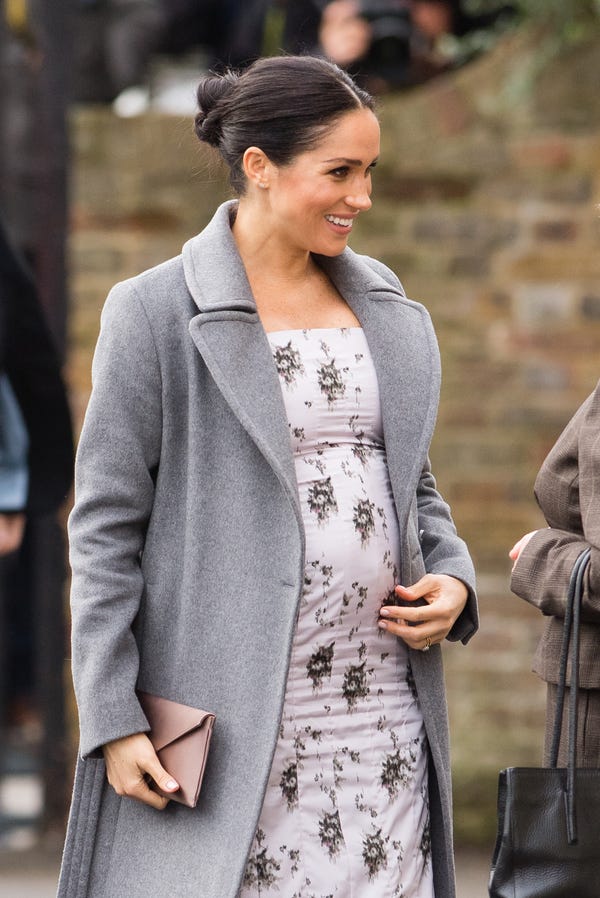 Markle wore the outfit to visit Brinsworth House, a residential care home in London, in December 2018. 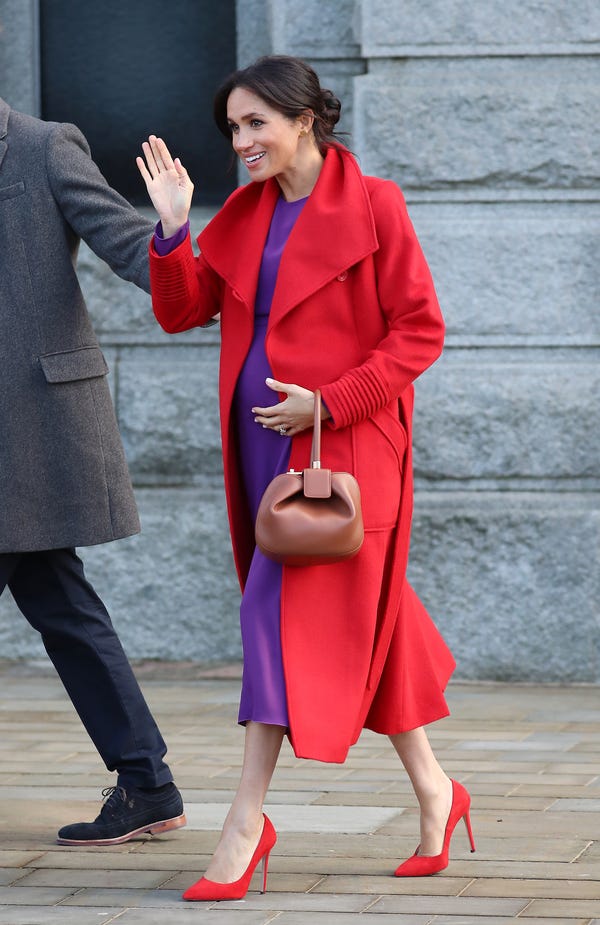 She wore the outfit with bright red Stuart Weitzman heels.

On a visit to Canada House in London in January, Markle wore a brown silk skirt from Massimo Dutti with a Reiss camel-colored coat. 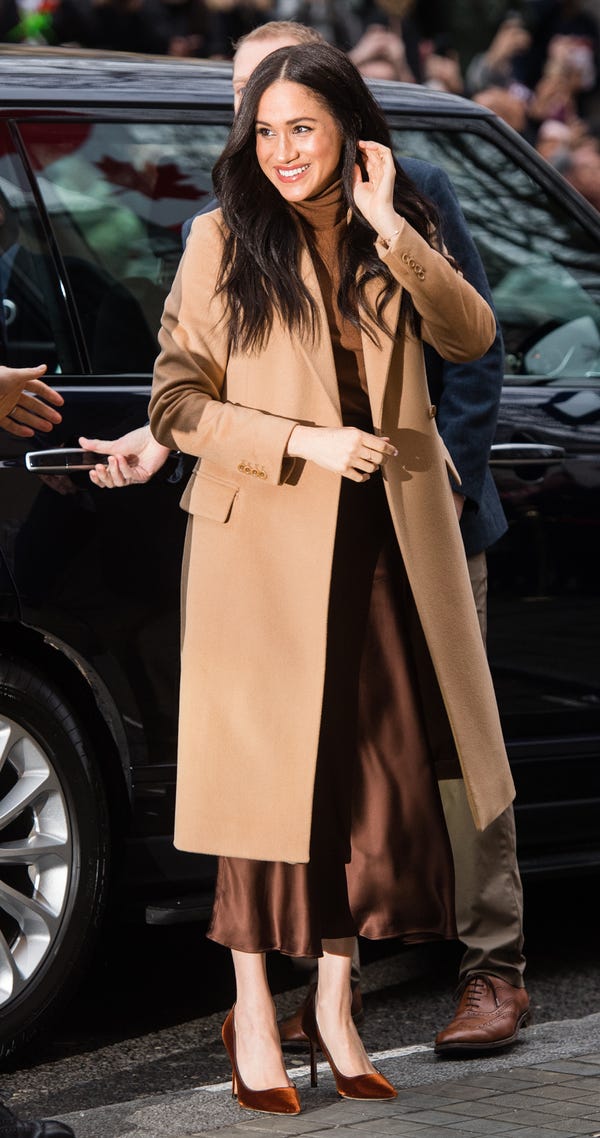 Prince Harry has perfected a smart-casual winter wardrobe, as shown by this look at a radio station in London in January 2018.

He wore an olive green jacket with a grey sweater and white dress shirt, along with navy pants and dark grey shoes. 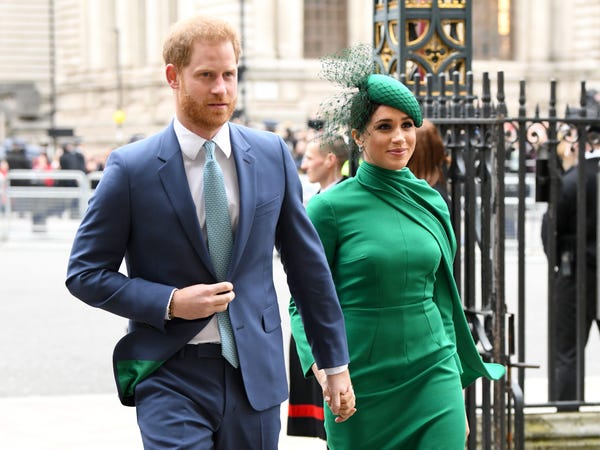 The couple was attending the Commonwealth Day Service at Westminster Abbey in March 2020 — one of their last royal appearances.