New York Yacht Club American Magic’s race boat PATRIOT capsized during the third race day of the PRADA Cup and their prospects of continuing in the competition are unknown at this stage.

The American outfit, who are one of the challengers competing in the PRADA Challenger Selection Series alongside INEOS TEAM UK and Luna Rossa Prada Pirelli, were leading around the final mark during their contest with the Italians on Sunday.

A strong gust of breeze pulled them up out of the water before race boat PATRIOT came down and crashed over onto its side.

The AC75 boats weigh seven-tonnes and have the ability to reach speeds of around 60mph. Earlier in the week, Sir Ben Ainslie described the moment Emirates Team New Zealand had capsized next to them during a training race and said that all teams are ‘sailing on a knife-edge’ in order to reach the performance levels they need.

Thankfully, after the capsize which took place at high speed, American Magic’s on-the-water safety team quickly accounted for the crew members and declared them as being safe.

In a statement released by the team, they confirmed that race boat PATRIOT had been damaged. At this point, the level of damage is not known and it is unclear if it will prevent them from continuing on in the decisive competition.

“The team’s AC75 racing yacht, PATRIOT, damaged during the incident and began taking on water,” the statement from the American team added.

“Efforts to stabilise PATRIOT and get the yacht back to shore are currently underway. American Magic is sincerely thankful for all of the assistance rendered to the team following the incident.”

The challengers have their entire America’s Cup campaigns on the line during this PRADA Challenger Selection Series, as only one will win and be able to take on Emirates Team New Zealand in the 36th America’s Cup match in March. 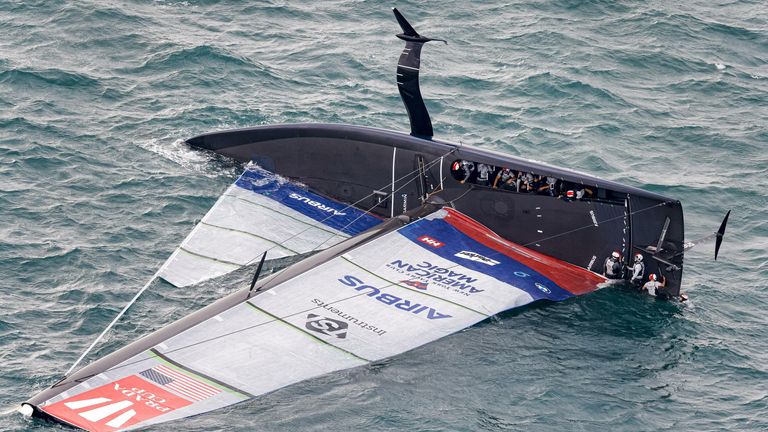 Watch every moment of the America’s Cup challenge, live on Sky Sports. Coverage continues with the fourth day of the PRADA Challenger Selection Series on Friday at 2am on Sky Sports Mix, repeated again at 9am.