When Scott Morrison addressed an international leaders conference on climate last week his emphasis was on how Australia could reduce its emissions with technology rather than when.

While saying Australia was on the pathway to net zero emissions, the Prime Minister didn’t set a timeline or new targets as many countries did in the lead-up to and during the virtual conference, organised by the White House. 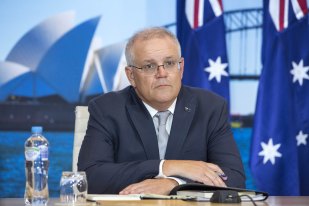 Scott Morrison told those assembled at the climate change summit that Australia could be relied upon because it only made “bankable” promises on emissions reduction. Credit:Jessica Hromas

As North America correspondent Matthew Knott reported in ‘Bankable’: Morrison promotes Australia’s climate record at US summit, he hit out at carbon taxes for destroying industries and eliminating jobs.

“Our goal is to get there as soon as we possibly can through technology that enables and transforms our industries, not taxes that eliminate them and the jobs and livelihoods they support and create – especially in our regions,” Morrison said.

With Australian flags and the Sydney Opera House in the background, Morrison told those assembled that Australia could be relied upon because it only made “bankable” promises on emissions reduction.

Much of the reader reaction to Morrison’s speech alternated between embarrassment and alarm over what they feared would be significant environmental and economic consequences of the federal government’s strategy.

Another Day: “Our present targets are on track to see the world and humanity fry anything less than a target to stop this is insufficient. No policy, no meaningful target is a recipe for disaster.”

Doug6: “Our PM continues to play the nationalistic card. I know what is best for Australia and Australians. I am the father figure of Australia and I look after the quiet Australians, not that mob in inner-city wine bars. He is so out of touch with reality it is very worrying.”

theodorousrex: “What happens when the EU, USA, Japan etc slap tariffs on our exports to account for the lack of climate accountability? Australia will definitely be in a recession then when many in the regions will be out of work – mining, agriculture, grazing, tourism will all suffer. Will we wait until other nations force us to act? We must remember this point in time when other nations asked us nicely to do the right thing.”

Four Sight: “Remember how we used to look at the US and wonder how they voted the way they did. That’s how the world now sees us.”

ScottoftheAntarctic: “It is frankly embarrassing. Honestly though I can’t be too surprised, I mean he is the guy who walked the halls of Parliament with a lump of coal mocking those concerned about climate change. Australia is behind nearly every other nation. Even China has announced a net zero target. We are left in the same category as Russia and Brazil.”

Kelsurfs: “Scomo sitting there with a plastic water bottle in front of him. Says it all for me.”

Jt: “USA got to the moon because in 1961 President Kennedy said we will be on the moon by the end of the decade. They did it. Targets are important. Every business operating has them.”

raymo51b: “Surely Morrison’s language about meeting a target when there isn’t one is the same as building a road with no end place, will we ever get there? It’s not the Highway to Hell, it’s the Road to Nowhere.”

GK farmer: “A good analogy here is the CEO of a large publicly traded company telling shareholders that there are no sales targets or sales guidance and that these non-existent targets would be achieved but we don’t know how. Further, we are going to use old methods (burning fossil fuels) which we know make the problem worse and we are going to invest more money into things we know don’t work (carbon capture and storage) to achieve the goals we have not set. Can’t imagine that CEO will last long.”

Knott says Australia certainly appeared to be in the “naughty corner” at the conference.

“At a briefing for reporters the day before the summit, I was surprised by how blunt a senior Biden administration official was when talking about Australia’s ‘insufficient’ climate targets,” he says.

“The official also suggested Australia had put too much emphasis on funding for new technologies rather than ambitious goals.”

Morrison’s position on the speaking list was also telling.

“He spoke after the prime minister of Bhutan, for example, and well behind other close US allies such as Canada and Japan.”

Some readers, however, praised Morrison, saying he was on the right course.

TD: “With Morrison not being sucked into making promises without plans, it would seem that he was the smartest one on the virtual talkfest. The other leaders however, tried to outdo each others’ commitments, without detailing how they were going to trump each other. While the PM insists on not bowing to virtue, we will be one of the few countries not stuffed up.”

Brian: “Morrison is showing real leadership here. He’s holding his ground against those inner-city virtue signallers who stand to lose nothing in the transition. Wake up people. Close to a million families will be immediately devastated by a fast transition to inadequate and unproven renewables. It needs to be phased in cautiously.”

Uncomfortable Truth: “Just a talkfest. Everyone said they are ‘gunna’. Actually doing it is another matter. Already there is widespread scepticism in the UK that their ambitious targets are achievable. Are they really going to ban all petrol and diesel vehicles from UK roads by 2030? Frame that one for the pool room.”

Laurie: “Targets are only for the virtuous. How to reduce, which Mr Morrison is planning, is for the realists. Name one country which has ever achieved their target in the past?“

Knott says some of this scepticism over targets is justified. In the US, for example, he says, US president Joe Biden’s target of a 50 per cent reduction in emissions by the end of the decade will be difficult to achieve.

“The US Congress may end up providing new funding for renewable energy and electric vehicles but it will almost certainly not pass legislation for a carbon price or anything that would fundamentally shift the economy,” Knott says.

“Biden will have to rely on executive orders and regulations which could be easily undone by a Republican president within four years.”

Aside from targets, the article prompted a reader debate about the virtues of different technologies to achieve emissions reduction, and about who pays for the research and transition to other technologies.

QED: “Can someone please challenge Morrison on his ‘emissions reduction through technology’ marketing campaign. CCS is unproven tech that is only in play if you stay with carbon-dioxide emitting fossil fuels and even then the equation is that is adds huge costs with very little real proof that it safely reduces emissions. Who wants much bigger power bills with no guarantee of emissions reductions?”

Erin: “The technology that enables and transforms industry is renewables and he is just not capable of the planning and leadership required to steer Australia in the direction it needs.”

Shirl: “Who do you trust to deliver, the government making big central taxpayer-funded investments or thousands of enterprises innovating in response to the market signals delivered through a carbon pricing scheme?”

only a little nuts: “It is bleedingly obvious that technology will be how emissions are reduced. History also tells us that politicians are notoriously bad at picking technology winners. The LNP mantra has always been that private sector businesses are better than the public sector at just about everything. So the obvious approach is to use market forces … like a price on carbon. Do that and the market place will take care of it.”

Online readers of The Sydney Morning Herald and The Age made 43,205 comments on 641 stories in the past week.

Most-read by subscribers in the past week