Snow on the Italian Alps is turning pink due to an algae that absorbs sunlight and increases the risk of ice melting.

The species of algae, known as Ancylonema nordenskioeldii, is lining the snow on parts of the Presena Glacier in northern Italy.

Scientists say the harmless algae is making the snow darker and it is absorbing more sunlight as a result.

Therefore, the snow melts at a quicker than usual rate – a process that exacerbates the effects of warmer temperatures caused by greenhouse gases.

A. nordenskioeldii is also present in Greenland’s so-called dark zone, where the ice is also already melting, scientists say, but its abundance in Italy adds fresh concerns. 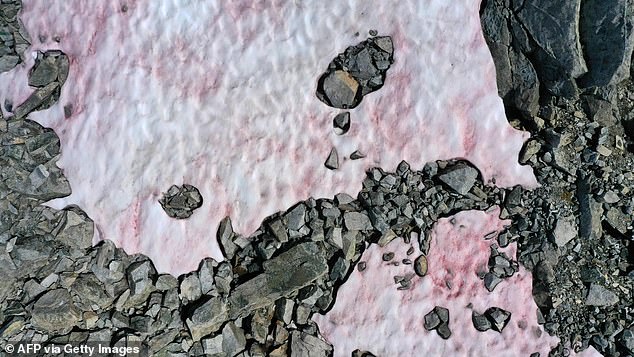 Scientists in Italy are investigating the mysterious appearance of pink glacial ice in the Alps, caused by algae that accelerate the effects of climate change 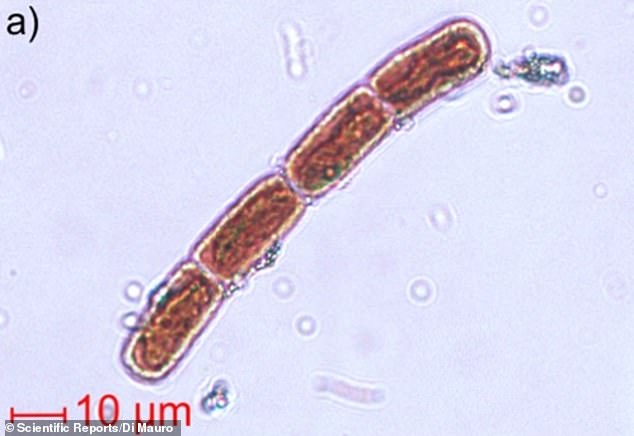 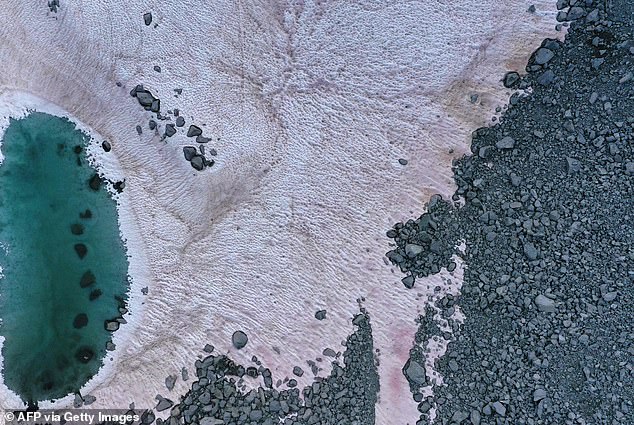 ‘The alga is not dangerous, it is a natural phenomenon that occurs during the spring and summer periods in the middle latitudes but also at the Poles,’ Biagio Di Mauro of Italy’s National Research Council told AFP.

‘Everything that darkens the snow causes it to melt because it accelerates the absorption of radiation.

‘We are trying to quantify the effect of other phenomena besides the human one on the overheating of the Earth.’

Di Mauro had previously studied the algae at the Morteratsch glacier in Switzerland.

They found that concentrations of A. nordenskioeldii on the glacier surface there was higher than that of other algal species.

Species of algae including A. nordenskioeldii produce dark pigments to protect them from the high solar radiation.

Normally ice reflects more than 80 per cent of the sun’s radiation back into the atmosphere, but as algae appear, they darken the ice so that it absorbs the heat and melts more quickly. 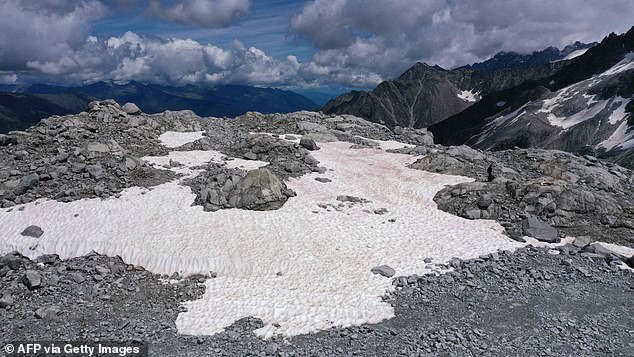 An aerial picture taken on July 3, 2020 above the Presena glacier near Pellizzano in Italy’s Alps 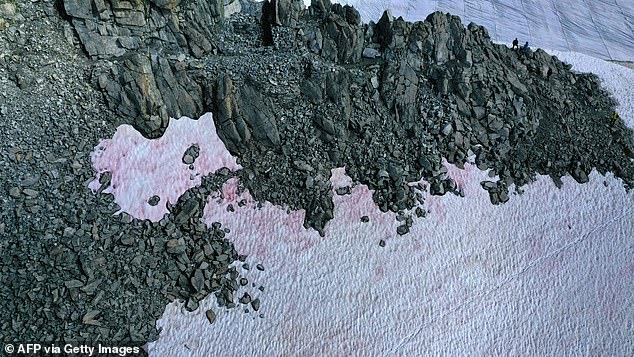 The algae creates a stunning effect when viewed from above but it causes ice in the Alps to melt, exacerbating the effects of climate change 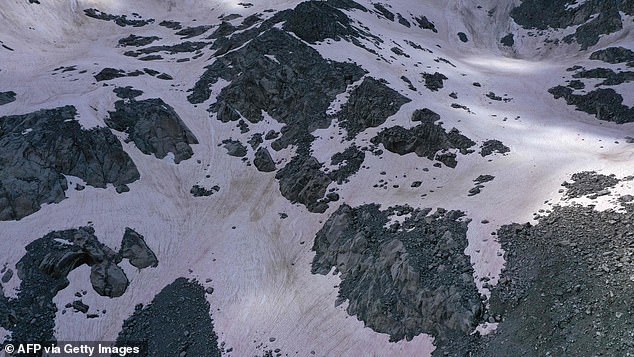 Normally ice reflects more than 80 percent of the sun’s radiation back into the atmosphere, but as algae appear, they darken the ice so that it absorbs the heat and melts more quickly

More algae appear as the ice melts more rapidly, giving them vital water and air and adding red hues to the white ice at the Passo Gavia, at an altitude of 8,590 feet (2,618 metres).

Before Di Mauro’s work, the glacier algal species had never previously been documented in the Alps and is known to dominate algal blooms in polar regions.

Researchers say the presence of hikers and ski lifts could also have an impact on A. nordenskioeldii.

It’s possible that the presence of human feet could damage algal blooms at a location that is already popular with holiday-makers. 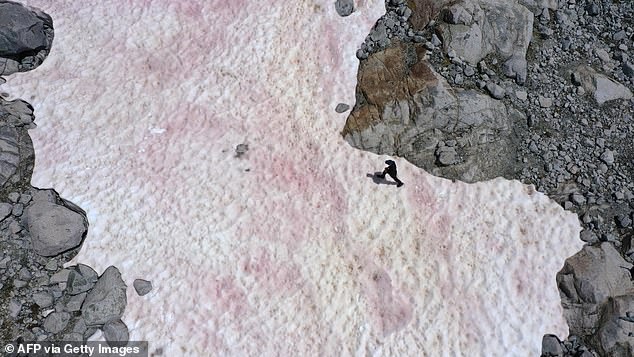 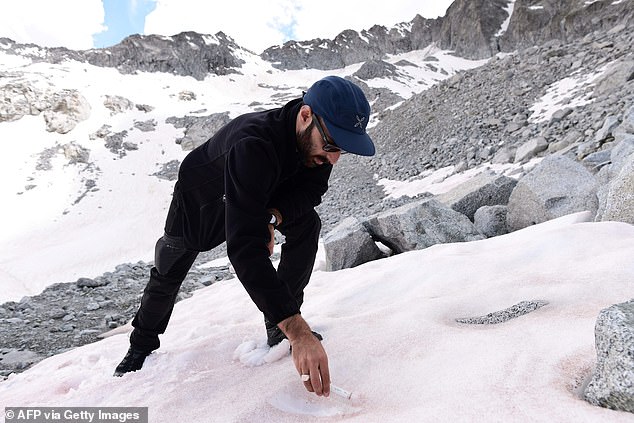 Biagio di Maio, researcher at CNR (National Research Council) takes samples of pink coloured snow on July 4, 2020 on the top of the Presena glacier near Pellizzano 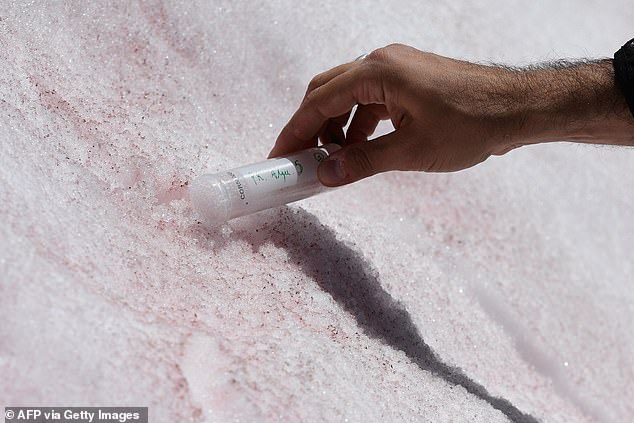 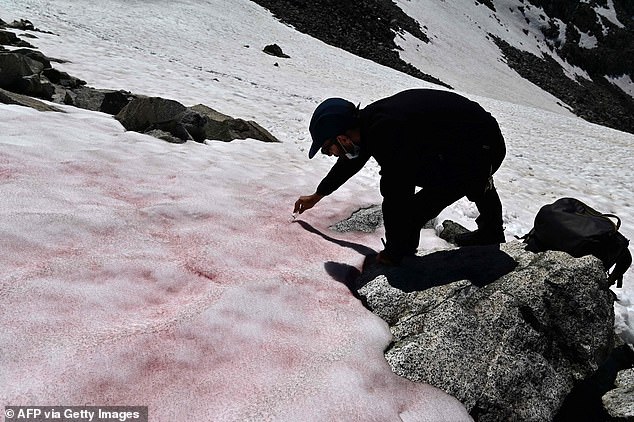 Tourists at the glacier have been lamenting the impact of climate change to AFP.

‘Overheating of the planet is a problem, the last thing we needed was algae,’ said tourist Marta Durante.

‘Unfortunately we are doing irreversible damage. We are already at the point of no return, I think.’

Elisa Pongini from Florence said she felt the Earth was ‘giving us back everything we have done to it’.

‘2020 is a special year – terrible things have happened,’ she said.

‘In my opinion, atmospheric phenomena are worsening. Climate change is increasingly evident.’

Global sea levels could rise as much as 10ft (3 metres) if the Thwaites Glacier in West Antarctica collapses.

Sea level rises threaten cities from Shanghai to London, to low-lying swathes of Florida or Bangladesh, and to entire nations such as the Maldives.

In the UK, for instance, a rise of 6.7ft (2 metres) or more may cause areas such as Hull, Peterborough, Portsmouth and parts of east London and the Thames Estuary at risk of becoming submerged.

The collapse of the glacier, which could begin with decades, could also submerge major cities such as New York and Sydney.

Parts of New Orleans, Houston and Miami in the south on the US would also be particularly hard hit.

A 2014 study looked by the union of concerned scientists looked at 52 sea level indicators in communities across the US.

It found tidal flooding will dramatically increase in many East and Gulf Coast locations, based on a conservative estimate of predicted sea level increases based on current data.

The results showed that most of these communities will experience a steep increase in the number and severity of tidal flooding events over the coming decades.

By 2030, more than half of the 52 communities studied are projected to experience, on average, at least 24 tidal floods per year in exposed areas, assuming moderate sea level rise projections. Twenty of these communities could see a tripling or more in tidal flooding events.

The mid-Atlantic coast is expected to see some of the greatest increases in flood frequency. Places such as Annapolis, Maryland and Washington, DC can expect more than 150 tidal floods a year, and several locations in New Jersey could see 80 tidal floods or more.

In the UK, a two metre (6.5 ft) rise by 2040 would see large parts of Kent almost completely submerged, according to the results of a paper published in Proceedings of the National Academy of Science in November 2016.

Areas on the south coast like Portsmouth, as well as Cambridge and Peterborough would also be heavily affected.

Cities and towns around the Humber estuary, such as Hull, Scunthorpe and Grimsby would also experience intense flooding.