The Tactix and the Mystics both recorded victories as Round Three of the ANZ Premiership got underway at Auckland’s Netball Centre.

The round continues on Sunday with the Stars taking on the Steel, before the defending champions return to court on Monday and face the Mystics.

Every match of Round Three, and the ANZ Premiership competition as a whole, is being shown live on Sky Sports and all of the franchises are working towards the Finals Series, which will take place on August 23. 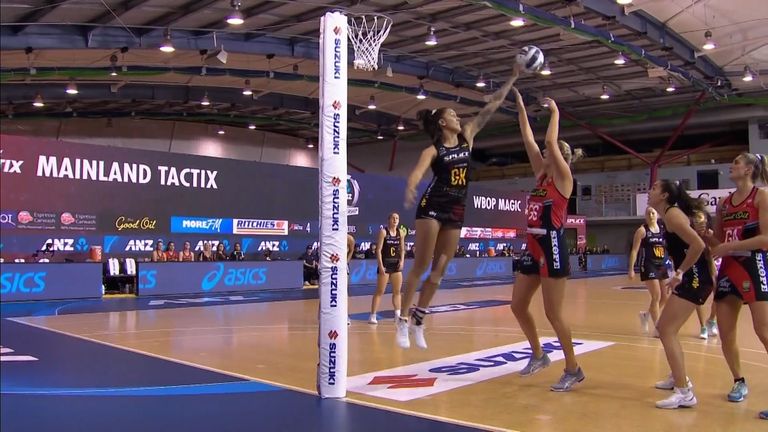 A strong second-half performance from the Tactix ensured they secured their second victory of the season against the Magic on Friday.

It was a contest filled with exceptional defensive work, particularly in both circles, and that resulted in both teams’ low conversation rates to goal; 73 per cent for the Tactix and 77 per cent for the Magic.

After losing the opening 12 minutes by two goals [11-9], the Magic turned up the heat in the second quarter and surged into half-time with a 22-19 advantage. Whitney Souness was driving their work in attack while Holly Fowler and Erena Mikaere pressed in defence.

Half-time arrived just when the Magic did not need it to though, because the Tactix regrouped during the interval. They returned to the court with a new focus and that paid dividends.

Jane Watson and Temalisi Fakahokotau disrupted the Magic’s continually disrupted shooters. Watson also turned over ball with ease further up the court while Te Paea Selby-Rickit upped her game in their shooting end.

The Magic shuffled their hand for the last quarter, however, the damage had already been done and they did not make the inroads required to secure a positive result.

Both sides will now return to their training courts and prepare for Round Four. The Magic have a double-header of matches in against the Pulse and the Stars and Tactix will commence the round against the Mystics.

And Mystics make it 4 from 4. Youth and Experience meshing so well. Fitzpatrick & Karaka smart, skillful and working well for each other. Couple of loose passes in the last few minutes from Mystics and the mindfulness of Steel gets them bonus point. @SkyNetball @ANZPremiership pic.twitter.com/gcgQzxlK34

Despite being pushed all the way, the Mystics created a new record for themselves on Saturday with their fourth consecutive ANZ Premiership victory.

After triumphing in their final match of the 2019 season, they have started this new one in fine form and have yet to experience a loss.

The tale of the tape is clearly shown by the full-time statistics. The Mystics were more accurate in their shooting circle, had greater potency in defence and snatched the amount of ball needed.

Grace Nweke took the bulk of the work up front, scoring 35 of their 46 goals, while Phoenix Karaka and Sulu Fitzpatrick continued to gel superbly out the back. They never finished a quarter behind on the scoreboard.