Australia Post has abolished the chief executive’s corporate credit card and tightened its rewards policy for employees following the Cartier watches scandal that triggered the resignation of Christine Holgate.

Ms Holgate quit as chief executive of the postal service on November 2 amid a firestorm over her decision in 2018 to buy Cartier watches worth a combined $20,000 for four senior employees as a reward for securing a major banking deal. 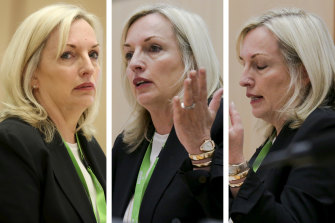 Christine Holgate pictured at a Senate estimates hearing in October last year, where she gave evidence about purchasing four Cartier watches, worth $20,000 in total, as a reward for employees who had secured a major banking deal for the postal service. Credit:Alex Ellinghausen

She has not spoken publicly since then but is expected to break her silence in evidence to a Senate inquiry set up to investigate the circumstances surrounding her departure in coming weeks. Ms Holgate has made a written submission to the inquiry, which could be made public as early as this week.

Acting chief executive Rodney Boys told a Senate estimates hearing on Tuesday the postal service had cancelled a number of corporate credit cards following an internal inquiry into its executive expenditure triggered by the watch scandal.

“We’ve removed a number of credit cards, we’ve lowered limits on other credit cards, [and] we’ve removed the Office of the CEO credit card for example. We’ve tightened up on our reward and recognition policy and we’ve introduced lower limits. We already had limits for gifts, benefits and hospitality declarations – we’ve lowered those limits considerably in recent months,” Mr Boys said.

Mr Boys did not detail exactly how the policies had been tightened but said the changes were among 32 recommendations the company was implementing in response to the internal inquiry. He said the findings of the its review “largely concurred” with the recommendations of a government-initiated investigation into the Cartier watches undertaken by law firm Maddocks.

Australia Post’s response to the watches fiasco will come under further scrutiny at the Senate inquiry established last month after Labor backed a One Nation motion to investigate the circumstances surrounding gifts and Ms Holgate’s exit. The inquiry is due to report on April 30, with no date yet set for a public hearing.

Ms Holgate announced her immediate resignation from Australia Post in a public statement on November 2, but through her lawyers had earlier claimed the board failed to follow the proper legal process in standing her down.

Australia Post chair Lucio Di Bartolomeo repeated the company’s position on Tuesday that Ms Holgate had agreed to stand aside on October 22 pending the government’s four-week inquiry, telling estimates she had done so “reluctantly”.

“Over a number of discussions that I had with Christine Holgate, we advised her that we wished her to stand aside while this investigation took place. She was clearly reluctant to do so initially but over a number of discussions she ultimately agreed late that afternoon that she would stand aside, and in fact we announced we would appoint Rodney [Boys] as an acting group CEO, and advised her accordingly that afternoon,” Mr Di Bartolomeo said. 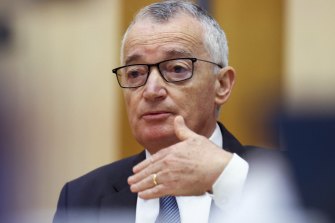 Australia Post chair Lucio Di Bartolomeo told a Senate estimates hearing on Tuesday that former chief executive Christine Holgate had “reluctantly” agreed to stand aside in October last year pending an investigation into her decision in 2018 to spend $20,000 on Cartier watches for four employees.Credit:Dominic Lorrimer

He said Australia Post had not requested Ms Holgate agree to any extra conditions as part of her resignation, except her request to forgo her termination entitlement to a six-month payout worth about $700,000.

“There were no conditions placed on her … in fact, we were releasing her from a condition she had to us to give us the six months’ notice,” Mr Di Bartolomeo said.

He said the company had spent around $320,000 on its search for a new chief executive, which was now in the final stages. He said efforts had been made to keep the process “highly confidential” because he was worried about leaks from inside Australia Post.

“I think historically Australia Post has had leaks,” Mr Di Bartolomeo said, adding: “Certainly not in the time that I was there.”

Prime Minister Scott Morrison said he was “appalled and shocked” when the watch purchases were disclosed at a Senate estimates hearing on October 22.

The Maddocks inquiry found no indication of “dishonesty, fraud, corruption or intentional misuse” of taxpayer funds but concluded the gifts were “inconsistent” with the Australia Post board’s legislative obligations to ensure proper use and management of public resources.