A new Australian auction record for Brett Whiteley’s painting, Henri’s Armchair, puts the star on top of the Christmas tree for the local art market in a year when only doom and gloom were predicted. Indeed, one local auction supremo tells me that things have never been better.

The plague year 2020 has seen a boom in Australian art auction records. Apart from the Whiteley, which sets a new high for all local art, fresh benchmarks have been achieved for many well known artists. In February, Menzies sold Jeffrey Smart’s Conversation Piece (1998), for $981,818. In July, Fred Williams’s Hummock in Landscape sold for $2,822,727 at Deutscher Hackett, while Hans Heysen’s A Summer’s Day (c. 1907) went for $601,364 in the same auction. In October, Deutscher Hackett sold Tom Roberts’s North Shore (Study for an Autumn Morning, Milson’s Point, Sydney) (1888), for a narrow new record of $920,455. 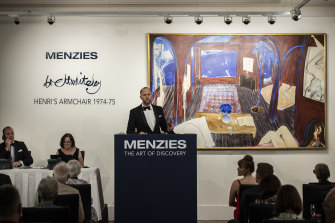 In November, Russell Drysdale’s Going to the Pictures (1941) was sold by Deutscher and Hackett for $2,945,455 which vies with Grandma’s Morning Walk (1972), sold by Mossgreen in 2017, for a reputed $3 million. In the same Deutscher Hackett sale, Howard Arkley’s Eastern Suburbs Pink Home (1991) set a new record for the artist of $869,090. Whiteley has probably been the greatest beneficiary of the auction surge, with several paintings selling for prices in excess of a million dollars.

Most of these record-breakers are solid, typical examples of the artists’ work, although I’d hesitate to call any of them iconic. The museums hold much better paintings by all these painters. In some cases I’m frankly mystified by the buyers’ taste. It shows, at the very least, that would-be collectors have money to burn, and are more likely to be fashion victims than connoisseurs. They are also likely to ignore quality works by less prestigious artists. What we’re watching is not a pattern of shrewd investment; it could more credibly be called “shopping”.

So while many Australians are teetering on the brink, waiting for government relief payments to run out, it seems there are plenty of us with deep pockets and an urge to spend. For the newly-rich there has been little need to modify their time-honoured preoccupation with status symbols: houses, cars, jewellery, designer clothes, designer furniture – and art.

In times of economic downturn the art market is usually the first to feel the pain and the last to recover. This tendency has been abetted by the previous Labor government’s sabotage of a promising scheme whereby art could be acquired as part of a superannuation package, and the Coalition’s lack of interest in repairing the damage. It might have been expected that the commercial galleries and auction houses would suffer during the lockdown, but collectors apparently didn’t read the script.

In Sydney’s commercial galleries business has been unusually brisk, which has been a pleasant surprise for the dealers, who have their own theories and explanations.

First up is the boredom factor. Being forced to remain at home for long periods, people have begun to feel dissatisfied with their surroundings. They’ve undertaken long-planned renovations, they’ve bought new furniture and art. 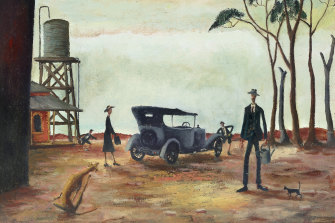 Russell Drysdale 1941’s Going to the Pictures sold for $2,945,455 in November.Credit:Deutscher and Hackett 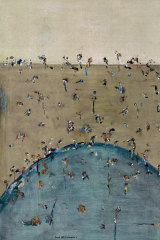 Secondly, there is a new willingness to buy online and sight-unseen. Some real estate businesses have found people ready to buy houses and apartments on this basis, and art is a much less daunting speculation. One Sydney dealer told me that a small Good Weekend piece about Andrew Hopkins caused a flurry of buyers from Melbourne to ring up and purchase works from his exhibition. “This has never happened before,” he said.

Thirdly, the global lockdowns have reversed a seemingly unstoppable trend that saw collectors desert local galleries in favour of international art fairs. Until the pandemic struck, wealthy collectors were becoming fixated on the idea of going to a big art fair in Basel, Miami, London or Hong Kong, where they would stay at a classy hotel, eat at top restaurants and buy expensive works from leading international dealers. It was the entire lifestyle package, and it made everyone feel part of an exclusive worldwide club.

Collectors who used to visit local galleries on weekends began saving their money for the glamorous overseas trip. It took the pandemic to send them back to the Australian product, as the collecting itch still needed to be scratched. Dealers say they’ve become reacquainted with buyers they hadn’t seen for years.

The important question about these seismic upheavals in the art market is: Does this represent a temporary trend or a structural change? The logic of consumer society suggests things will revert to where they were, pre-COVID, should a vaccine prove effective. And yet, a pause can also lead to a considered reassessment. Do we really need that many staff? Do we need an office in the CBD? Do we need to go off to Basel and buy hyper-expensive art when we can get perfectly satisfactory work at home for a fraction of the price?

I suspect it all boils down to a matter of how compulsive the shopping and show-off urges have become for the top collectors. There will be some who decide it’s only prudent to reign in the expenditure and devote more time to local alternatives. The decisive factor will be cash. Never in history have so many people had so much money, and most of them seem to have come through the pandemic with their fortunes intact. Australia’s art dealers and auction houses need to make the most of this mini-boom because when the virus subsides the world party will start again.