Bernie Finn has announced he will lead the Democratic Labour Party into the November state election after being expelled from the Liberal Party for disobedience last week.

The state opposition voted to expel the right-wing MP at a party room meeting last Tuesday after he said abortion should be banned in Victoria, even for rape survivors. 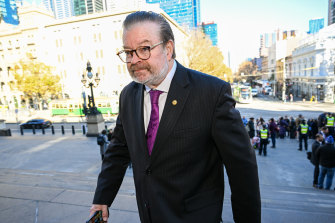 Finn told 3AW on Thursday morning he had been approached by eight different political parties following his departure from the Liberals, and found the DLP was “a far better fit” for him.

He said he would run in the Western Metropolitan Region, the electorate he has represented since 2006.

Finn said the party was aiming to win four seats in the upper house and he believed it could unseat Reason Party MP Fiona Patten in the Northern Metropolitan Region.

He said the party would choose its preferences on a case-by-case basis, but conservative Liberals “can be pretty much assured that if we run, they will have our preferences”.