Brigitte Macron is back! French First Lady is seen wearing a face mask for her first official outing since the end of the country’s lockdown as she visits a hospital near Paris

The French First Lady headed out for the first time since the start of France’s lockdown and made sure to wear a protective mask.

It was back to business for Brigitte Macron, 67, as she visited the Montfermeil Hospital, in Seine-Saint-Denis, near Paris on Tuesday, where she met with medical staff and toured the facilities.

It was the first time that she’s left the Elysee Palace for a public engagement since the start of France’s lockdown on 17th March.

Resuming her duties as First Lady in person, Emmanuel Macron’s wife was careful to keep herself protected during the outing, with a blue mask covering her face as recommended by the French government.

She visited the hospital’s temporary laundry facilities, which allow them to speed up the cleaning process for staff scrubs, French media La Depeche reported. 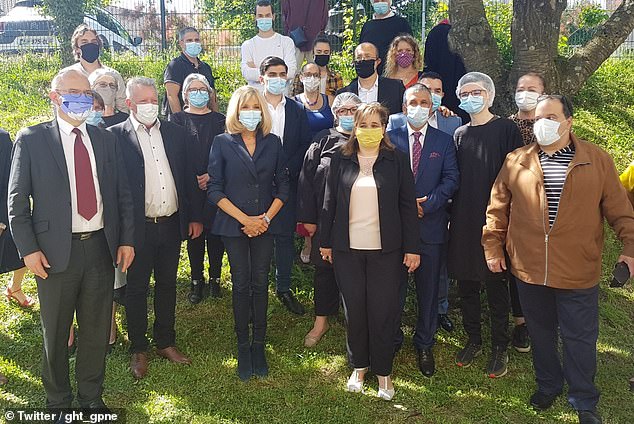 It was back to business for Brigitte Macron, 67, as she visited the Montfermeil Hospital, in Seine-Saint-Denis, near Paris on Tuesday, and met with medical staff and visited the facilities. The French First Lady made sure to wear a protective mask, as did members of staff

Sporting a stylish navy blue suit for the occasion, Brigitte made sure to keep her mask on during her visit on the premises, but later took it out while meeting with staff member in a conference room, where they sat at a safe distance from one another.

Brigitte, who is the President of the Hospitals of Paris, Hospitals of France Foundation, has financially supported the hospital’s April initiative to temporarily move the laundry into their premises in order to quickly provide clean equipment for its staff as they dealt with COVID-19 cases.

She wanted to personally congratulate the staff and see the laundry for herself. According to the group managing the hospitals of Northern Greater Paris, the French First lady also discussed other projects undertaken by the Montfermeil hospital during her visit.

The First lady took the helm of the Hospitals of Paris, Hospitals of France Foundation on January 8, a timely appointment which took place two months before the country entered lockdown due to the coronavirus. 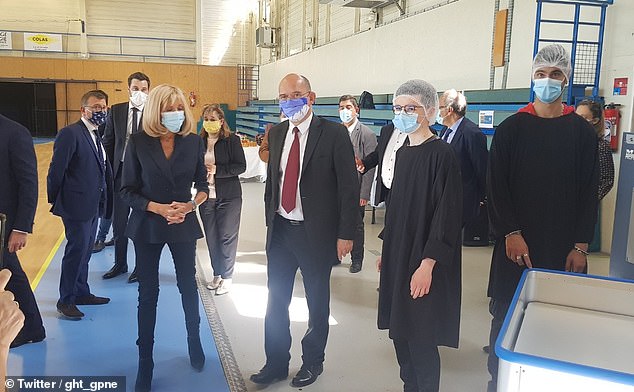 Looking as stylish as ever, she wore a navy balzer with three-quarter-length sleeves, with a light blue watch on her left wrist.

She paired it with a pair of navy blue skinny jeans and blue swede heels.

She sported her usual impeccable mid-length blond bob and a smokey eye for the visit. 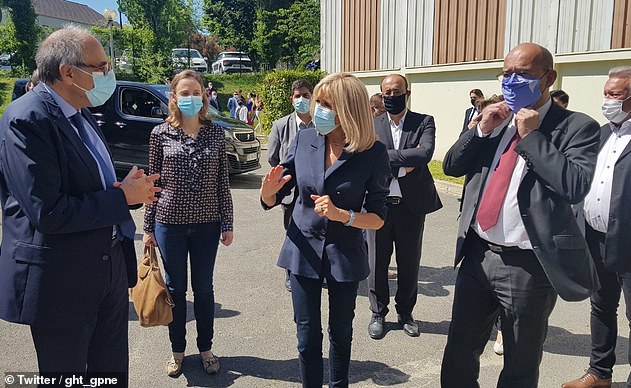 Wearing a stylish navy blue blazer with a pair of skinny navy blue jeans, the First Lady met with staff and listened as they talked her through the work they had carried during the pandemic 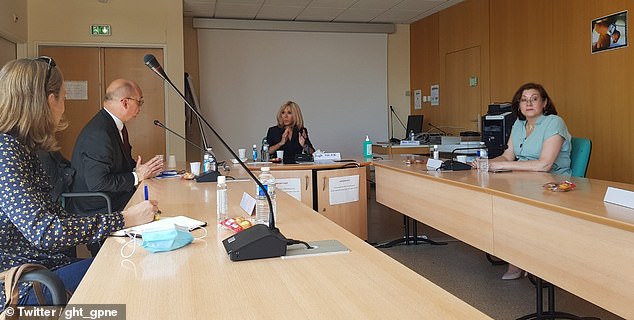 Brigitte, a mother-of-three who counts seven grandchildren, waited a week after the French lockdown was lifted on 11th May to make her first outing.

Until then, she had remained confined to the Elysee Palace in Paris with her husband Emmanuel Macron.

However, she kept busy during isolation, just like the Duke and Duchess of Cambridge, using her time to video call several organisations as well as hospices and retirement homes around the country to keep in touch with their residents. 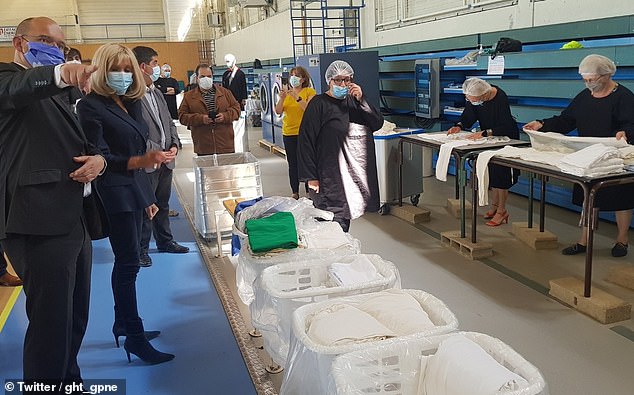 Since the end of the lockdown on May 11, wearing a mask in public is highly recommended in France, and mandatory in some public places, including shops, at the doctor, in public transports and in schools.

In shops, masks are recommended when social distancing is not possible, and mandatory for staff.

In hairdressers, masks are mandatory for the staff as well are for clients, who risk having their appointment cancelled if they don’t comply.

People caught without wearing a mask in public transports can face a 135 euro fine (£120).

The masks can be bought or home-made as long as they meet the standards of AFNOR, the hub of the French standardization system.