Firefighters and aircraft from 10 states began arriving in California Friday to help weary crews battling some of the largest blazes in the state’s history. The fires have killed at least five people and 100,000 people across the state were under orders to evacuate.

Hundreds of blazes are burning, including many that are small and remote. The bulk of damage was from three clusters that were ravaging areas in wine country and the San Francisco Bay Area.

Those complexes, consisting of dozens of fires, exploded in size on Friday. Together they scorched at least 991 square miles and destroyed more than 500 homes and other buildings, fire officials said. 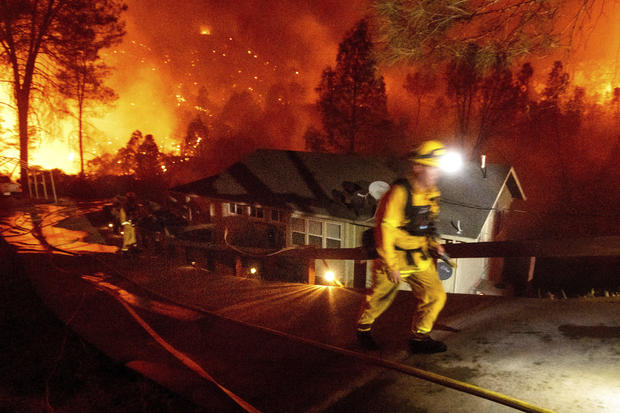 The fires were sparked by lightning from unsettled weather earlier in the week. The National Weather Service issued a fire weather watch from Sunday morning into Tuesday for the entire Bay Area and central coast. Forecasters said there was a chance of thunderstorms bringing more lightning and erratic gusts.

More than 12,000 personnel were fighting fires around the state, aided by fleets of helicopters and fixed-wing aircraft. By Friday, the state’s fire agency, Cal Fire, had called out 96% of its available fire engines.

But reinforcements began to arrive. The number of personnel assigned to the LNU complex, in the heart of wine country north of San Francisco, more than doubled from 580 to over 1,400 Friday and nearly 200 fire engines were on the scene, fire officials said.

That could help crews make further progress against the sprawling fire. Most evacuations for the town of Vacaville were lifted Friday. The fire threat there was reduced after reaching the edges of town.

“I feel like we’re up on our feet, standing straight and actually moving a little bit forward,” Kavanaugh said Friday night.

However, the number of large fires was “staggering” and had put “tremendous strain” on firefighting resources throughout the Western states, he said. 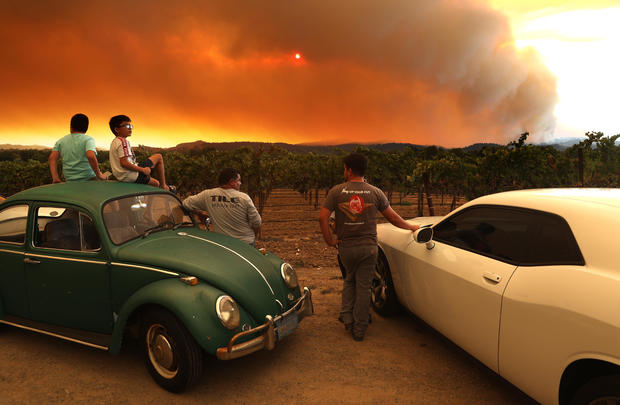 Governor Gavin Newsom said 10 states were sending personnel and equipment. The governor also said he was reaching out to Canada and Australia for help. “We have more people but it’s not enough,” Newsom said.

Firefighters are also up against COVID-19. Base camps look different this year, allowing crews to spread out and socially distance, CBS Sacramento reports.

“We’re getting our temperatures checked, we’re all wearing masks. It’s a lot different. I was wondering how firefighting season was going to be and I’m getting first-hand how it is,” said Capt. Jesse Gomez with the Selma Fire Department.