‘Dash & Lily’ is the perfect holiday treat. HL spoke EXCLUSIVELY with Austin Abrams about why he loves the moment Dash and Lily meet each other and don’t even know it.

Dash & Lily is your next great Netflix binge. The holiday series, based on the popular book by David Levithan and Rachel Cohn, follows the Christmas romance that builds between cynical Dash and optimistic Lily as they trade dares, dreams, and more in a notebook they pass back and forth in New York City. 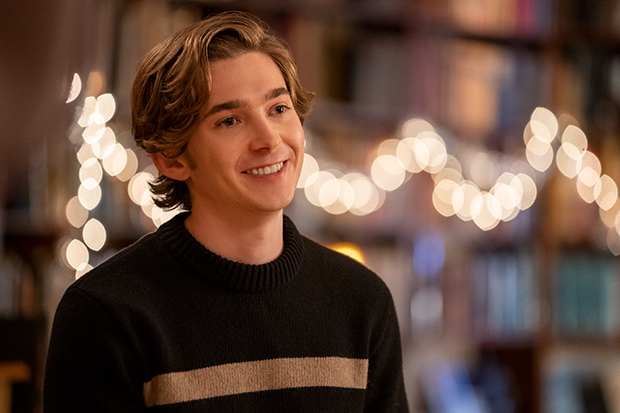 You’ve had a lot of different roles over the past couple of years with Euphoria, This Is Us, and Chemical Hearts. Why was Dash a character you were drawn to?
Austin Abrams: Essentially, I thought there was a good story there, and I was really into the producers. We’ve got Shawn Levy at 21 Laps, who did Stranger Things, Arrival, and just a lot of different things. He is a really great producer. And then as well, Dash is a very interesting person and teenager. He’s got a family that doesn’t really pay any attention to him. He has a lot of internal struggles that he works through throughout the series. There were a lot of positives. There’s also the Netflix side of it. I don’t mind when someone does watch what I do. I do appreciate the communal aspect of a lot of people watching one thing and just that sense of community is very nice.

You recently played Marc on This Is Us, who is completely different from Dash and even Ethan from Euphoria. What’s it’s like diving into good guys and bad guys with your various roles?
Austin Abrams: For me, I approach every character as its own individual. With Marc, when you’re saying he’s a bad guy, I don’t necessarily view Dash as a good guy. I don’t view it necessarily in a black and white sort of way. I very much try to seem them as an individual and why they do the things they do. Looking back at it now, Marc is an asshole. But at the time, you’ve got to just kind of approach them as their own person.

Are you more like Dash or Lily when it comes to love and romance?
Austin Abrams: I feel like I’m probably a healthy balance. Both of these guys are on extreme ends of the spectrum, with especially how they view life, which is why I think they complement each other so well. But I’m definitely a healthy mix. I feel like that’s the best place to be.

What was your first impression of Midori Francis and what was it like working with her to establish a chemistry that wasn’t physical initially?
Austin Abrams: Definitely the first impression I had was that she should definitely be the one that does this part. I felt like there was just a connection there. I really appreciate her and respect her because she is a very hardworking and thoughtful person. She really does love what she does and wants it to be the best thing possible. I very much appreciate that and like that about her.

I love that Dash & Lily captured New York City during the holidays before the pandemic. It feels like a time capsule.
Austin Abrams: It’s crazy how it all happened because at the time we were doing it we had no idea that this would end up being the case, that it would be a nostalgic show for these reasons. I am very happy that people are going to hopefully be able to have this and feel that sense of nostalgia and warmth when they may not have that. I also thought about something the other week. Both Dash and Lily’s families leave them, so they’re kind of on their own for the holidays, which also reminds me how a lot of people are going to be this year because they’re probably not going to be able to see a lot of family members. So that kind of reminds me of the show and real-life mirroring one another. 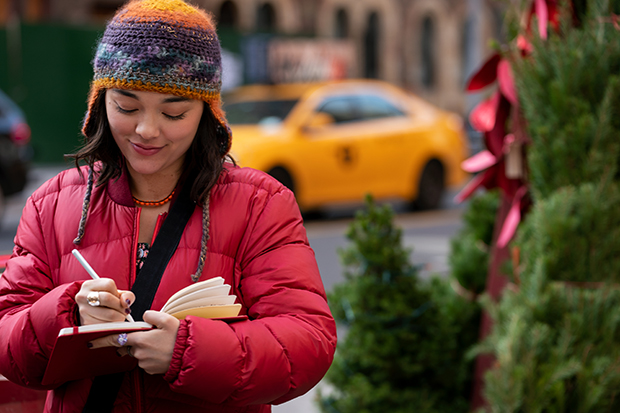 The Christmas Eve party had me screaming because Dash and Lily were right there and didn’t even know they were meeting each other. I thought that was such a great scene because you can see the connection between them immediately.
Austin Abrams: They’re so close but so far at the same time. I do like that scene and think it’s important because you do see them interacting just as themselves and having no knowledge of the other. You see their connection in a pure way without meeting each other and knowing about each other from the notebook and that pressure. They’re meeting each other, and there’s no pressure or expectations or anything like that. You do see a pure connection, which I think is really important.

One thing I really love is that this book of dares is free of social media and technology. Was that something both you and Midori recognized?
Austin Abrams: I think there’s pureness in not being able to look up each other and develop all these preconceived thoughts about the other person. Although, they can’t help but develop thoughts about who the other person is going to be. But I think it is cool that they truly get to know each other and get to know each other’s souls a bit more because they’re not able to see one another or really know who they’re talking to at all. I think that also speaks even more to their connection.

Outside of the Lily relationship, what would want to explore with Dash in a season 2?
Austin Abrams: I think definitely the parents’ aspect would be interesting. Although at the same time I do like the fact that you don’t really see his mom, and you just see his dad briefly to get a taste of what the relationship is like. So a big part of me does like the fact that it’s kind of left up to your imagination because sometimes I feel like that’s kind of the strongest way. Just leaving it up to the audience’s imagination is sometimes better even than showing it. But I am very interested in what that would look like, so I definitely think an aspect that would be really interesting to explore.