Michael Palin is deliciously wry in Travels Of A Lifetime… He is warm, engaging and engaged, never pompous or condescending

Michael Palin: Travels Of A Lifetime

Michael Palin’s Around The World In 80 Days, originally broadcast in 1989, was the first ‘celebrity travelogue’, paving the way for the situation we have today where, in recent years, we’ve had Sue Perkins doing Japan, Paul Hollywood doing Japan, and James May doing Japan.

(I can live without ever seeing the world’s widest pedestrian crossing, in Tokyo, again. Or any robots.) Meanwhile, Grayson Perry has been hanging out in America, Frank Skinner is touring Scotland, while Romesh Ranganathan is probably somewhere or other, as is Joanna Lumley.

Around The World remains the gold standard. It was appointment TV when it was initially broadcast, and hugely successful, and it is wonderful all over again. To recap: Palin was charged with following in the footsteps of Phileas Fogg, the fictional character who circumnavigated the globe (without flying) in 80 days.

Michael Palin: Travels Of A Lifetime was a compilation show, interspersed with reflections from Palin, while the entire original series is now available on iPlayer. This review is taken from both because, once I’d watched on Sunday, I couldn’t resist going back to watch some of the actual episodes.

Nowadays, you don’t get a sense of real travel from most travelogues. You just get a sense, say, of some celebrity having been picked up from the Hilton before being dropped on that Tokyo crossing to deliver some spiel.

Here, though, we even see all the prep. The packing and the jabs and, because it’s the pre-digital age, the buying of maps and arranging a code name with the bank should you need to phone for emergency money. 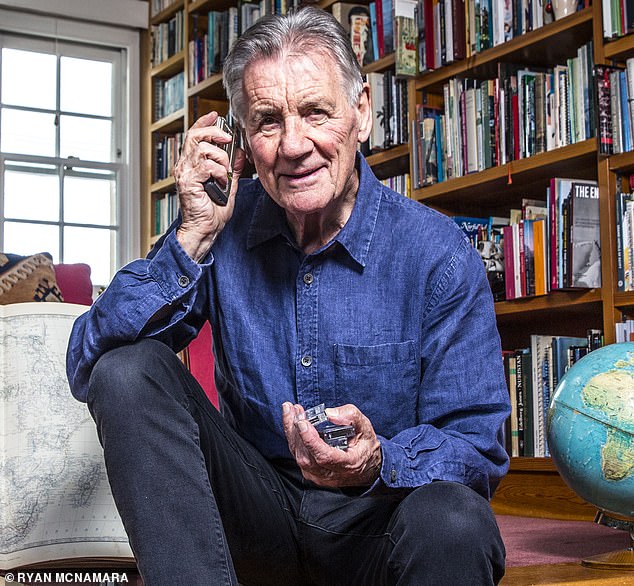 Michael Palin (above) was charged with following in the footsteps of Phileas Fogg, the fictional character who circumnavigated the globe (without flying) in 80 days

(‘Hello Coutts, it’s Jabberwocky here.’) Palin also met Alan Whicker, previously our go-to traveller (along with Judith Chalmers, wishing you were here), who advised him to ‘never learn the local language’ and just push through saying you are British and from the BBC.

If you watch the first episode in its entirety you’ll see him give some further advice that is unexpectedly, divinely bitchy. ‘You mustn’t try and fool the viewer,’ he said. ‘When you see little Bernard Levin going over the Pyrenees in his funny shorts and standing at the peak, all alone and solitary, you know behind him there are two limos full of PAs with Thermoses… it’s a lot of nonsense. Don’t pretend you’re on your own.’

The thought of the critic – ‘little Bernard Levin in his funny shorts’ – made me laugh more than anything on Spitting Image.

Palin is deliciously wry. In Venice, he opens his hotel window to discover he has a terrible view ‘probably of most interest to roofing contractors’. He is warm, engaging and engaged, never pompous or condescending.

Again, it always feels like real travel. He frets about his bowels, as we all do. He gets stressed trying to buy a train ticket where he can’t speak the language, as we all do. And he never tells us what to feel.

He is obviously distressed by the sight of child beggars in Bombay, as it was called here, but he doesn’t weep to camera or any of that.

There are encounters that seem genuinely spontaneous, as when he happens to meet a film director in the bar of his Cairo hotel – not the Hilton, there was no bath plug and no hot water – and the next morning appears as an extra in his current project, which may not be big budget.

First clue: it’s being filmed in a Safeway supermarket.

Palin then travelled the Persian Gulf by dhow, so it was six days on a basic boat with ‘not a life jacket in sight’ and no cabins – he slept on sandbags on deck – and terrifying toilet facilities.

But by the end he and his fellow travellers, mostly poor Egyptians who were off to seek work in Saudi Arabia, were like family. At one point he hooked up an old fella to his Walkman and played Bruce Springsteen and the old fella started to jive.

It was a beautiful, human connection of the kind you just don’t see now anywhere else.

Spitting Image was also appointment TV when it was first shown – 1984, and it then ran until 1996 – and now it’s been remade for BritBox, oddly, but there you are. This new series which, for timing reasons, I have to base on last Saturday’s episode rather than yesterday’s, was hit-and-miss, possibly more miss. 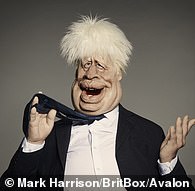 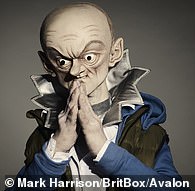 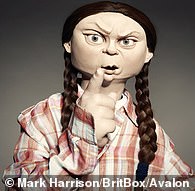 The best sketches were Greta Thunberg as a weather forecaster with only one forecast – ‘Hot!’ – and Dominic Cummings as an alien wanting to eat Boris Johnson’s baby (all above)

The best sketches were Greta Thunberg as a weather forecaster with only one forecast – ‘Hot!’ – and Dominic Cummings as an alien wanting to eat Boris Johnson’s baby.

But there was too much Trump, Prince Harry sounded as if he was part Australian and part cockney, and the recurring Lewis Hamilton joke was plodding. That said, it was wickedly savage and sometimes shocking – you’ll have to watch to see how Trump writes his tweets – and the puppets are such marvels of exaggerated likenesses, they do compensate for the weakness of some of the jokes. A bit.