A lot has happened since Denise Richards and Charlie Sheen first locked eyes on the set of a show called Good Advice. It’s been 20 years and a lot of ups and downs, but somehow it appears the pair has managed to emerge mostly unscathed.

Now, they’ve each found new loves and a friendly groove co-parenting their two daughters. “Communication’s great with him,” Denise recently told US Weekly. Here’s a look back at their tumultuous relationship history.

The actors met while filming Good Advice in 2000, per People. It took a bit longer for sparks to fly, though. Denise guest starred on Spin City in 2001 and then they began dating. Denise knew he was “the one” by the second date and they were engaged by the end of 2001.

The couple married on June 15, 2002. Charlie had a bad-boy reputation, but he had reformed before meeting Denise. “I fell in love with who he was when I met him: a strong man who could admit his weaknesses and work through them,” Denise shared, per IMDB.

Denise played Annie and Charlie played Tom in the third Scary Movie installment, per IMDB. Denise was expecting their first child when they attended the premiere, and their life didn’t look at all like the horror movie depicted, at least not yet. 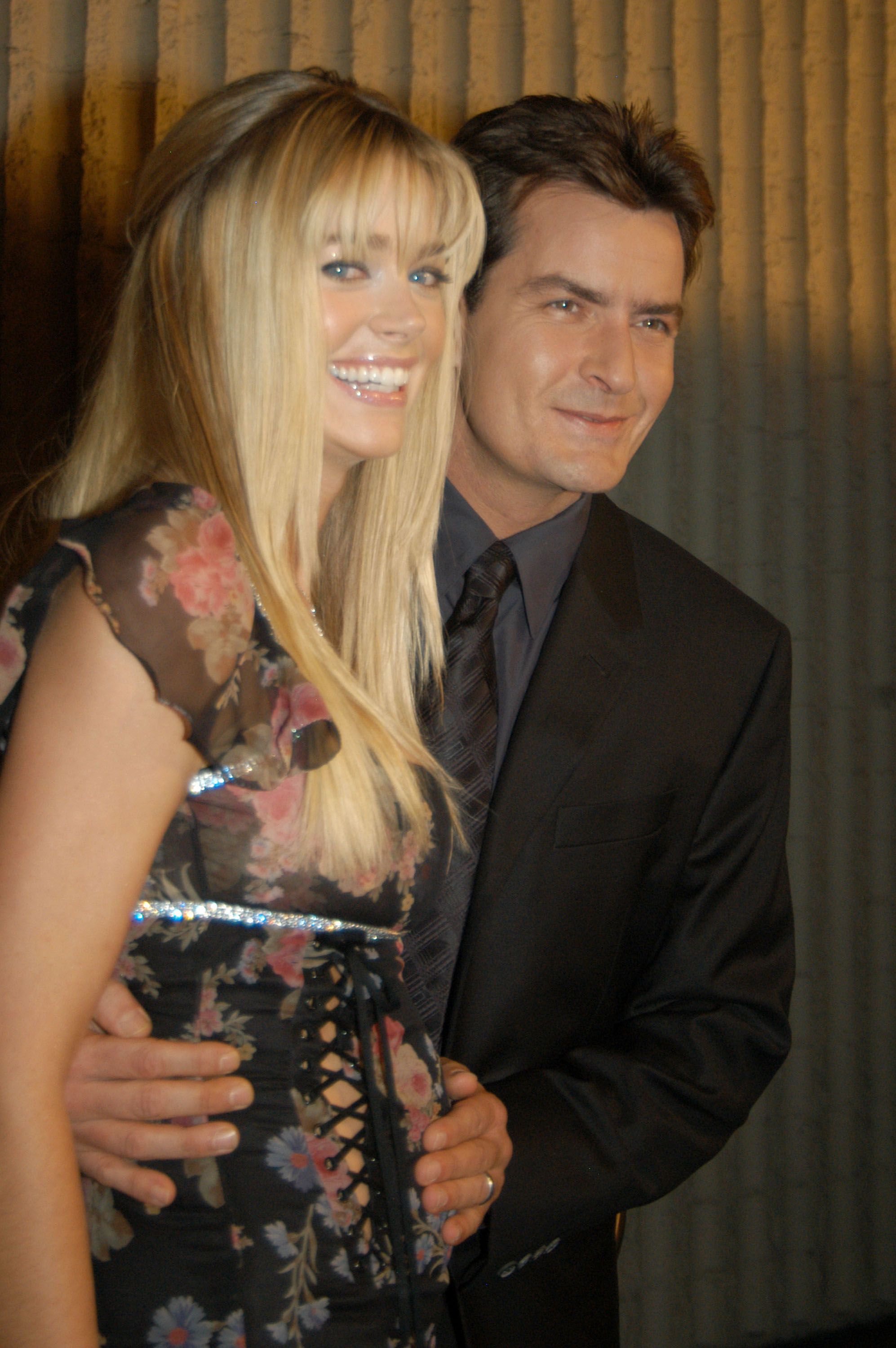 Denise and Charlie attended multiple red carpet events while she was expecting their first child. The couple’s daughter Sam was born on March 9, 2004. It was Denise’s first child, and Charlie’s second. Charlie had one daughter from a previous relationship. 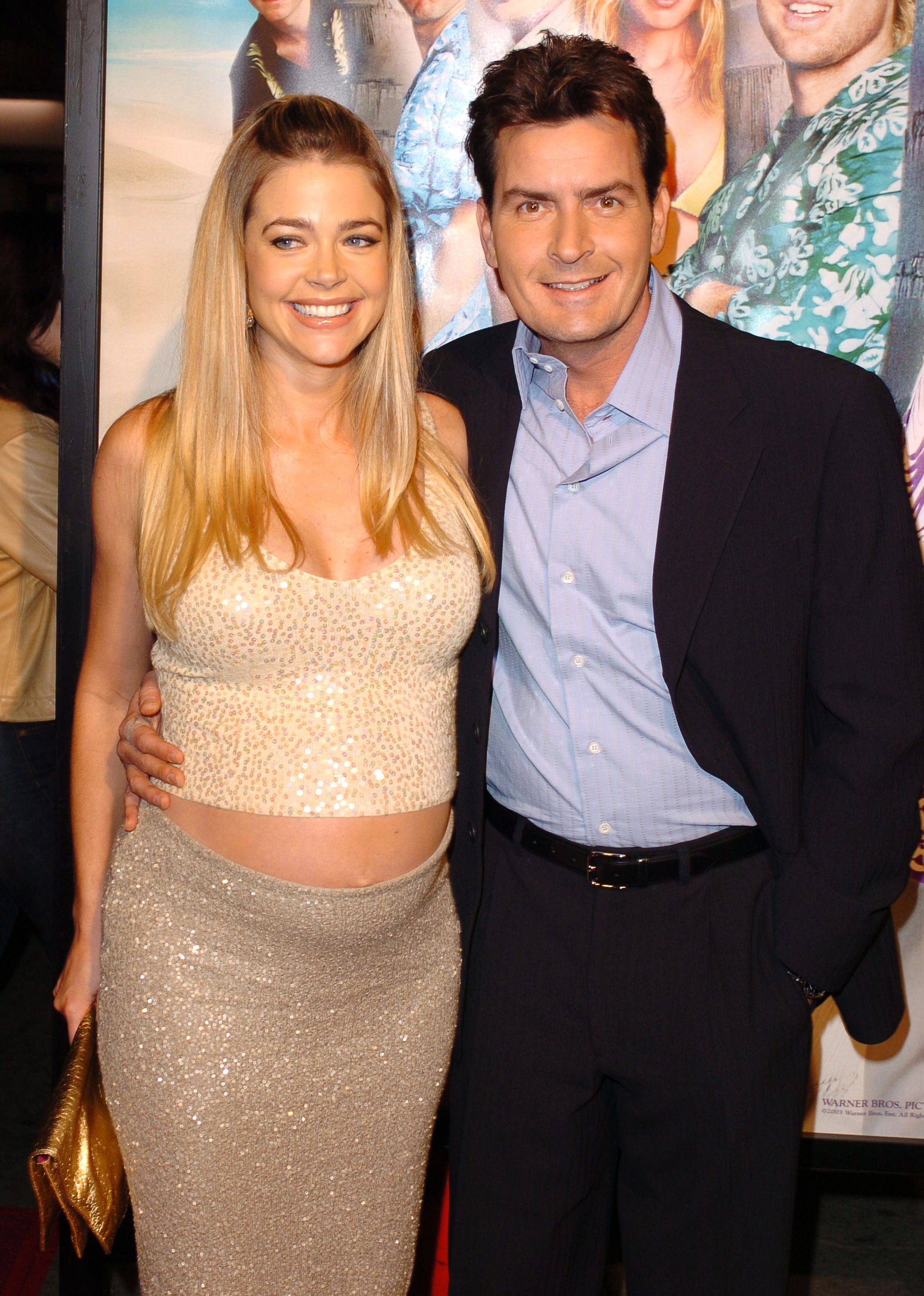 Denise appeared on Two and a Half Men as Charlie’s ex who comes back into his life in multiple episodes. Her TV stint was brief, though.

She was six months pregnant with their second daughter, Lola, at the time. Denise and Charlie released a statement: “We are deeply saddened by the recent events and out of our love and concern for our daughter Sam, our unborn child and each other, we ask that you respect our privacy during this difficult time,” People reported. Denise asked for legal and physical custody of her children and visitation rights for Charlie, according to the publication.

Denise gave birth to their second daughter in the middle of the summer and mid-divorce. The pair briefly reconciled. However, by 2006 Denise and Charlie continued with divorce proceedings according to People. Denise accused Charlie of prescription medication abuse, violent mood swings, compulsive gambling, and use of pornography, the publication reported. Their marriage was officially over in April 2006, per People.

Charlie and Denise took their daughters to Mexico, but they were quick to correct rumors circulating that they were back together. “We’ve actually become like brother and sister, we really have. Nothing more than that,” Denise said, per Huffington Post. “We’ve become very, very good friends.”

Charlie took to Twitter with multiple rants, including insults directed at his ex. Charlie called Denise “worst mom alive” and an “evil terrorist sack of landfill rash” who “couldn’t act hot in a fire or wet in a pool,” E News reported. Denise kept her cool and retweeted a Leeza Gibbons quote reading, “The less you respond to negative people, the more peaceful your life will become.”

Charlie kept his HIV diagnosis private for about four years, before sharing it publicly in an interview on Today. “It’s a hard three letters to absorb. It’s a turning point in one’s life,” Charlie told Matt Lauer on Today. “I have a responsibility now to better myself and to help a lot of other people and hopefully with what we’re doing today others will come forward and say, ‘Thanks, Charlie.'”

Charlie had previously revealed his HIV positive diagnosis to his two ex-wives, Denise, and Brooke Mueller. “She’s known Charlie was HIV-positive for a number of years,” a source told People.

Denise was nearby to support Charlie. “I moved in the neighborhood where he was living, and being that close to him, it was very hard,” Denise said at the time per US Weekly. “But anytime that something would go on at the house or with him, he knew he could call me at 2 in the morning and I would be there—no matter what.”

The actress brought a lawsuit, claiming Charlie had abandoned a trust he had created for his kids, People reported. She also cited that he had sent their daughters obscene texts about her.

By 2017, Denise and Charlie are more amicable.

In an Instagram photo of a family dinner, Denise added in the caption: “We’ve had a colorful year …at the end of the day we’re still a family..”

Denise married Aaron Phypers and later shared in aThe Real Housewives of Beverly Hills episode that Charlie was invited but didn’t attend her wedding. “Even if he did bring a prostitute as his date, I wouldn’t care,” she said. “It’s just, it is what it is. No matter what’s gone down with Charlie and I, I invite Charlie to anything having to do with the kids and I.”

Charlie sent her well wishes from afar: “[He] wishes them nothing but happiness!” Sheen’s rep told Entertainment Tonight.

After Denise filed for child support, Charlie responded with a statement to The Blast. “D and her legal posse traffic only in fiction my day in court is painfully overdue. She is behaving like a coward and the truth will prevail.”

Charlie’s accusation came up during the RHOBH season 10 premiere on April 15, and Denise responded by saying, “I’ve been called worse by him. Actually, that’s tame.”

April 2020: Denise tries to shield their daughters from legal drama.

In an April episode of RHOBH, Denise opened up to husband Aaron Phypers about the custody battle with Charlie and how it’s affecting her daughters. “If he doesn’t want to pay child support, that’s on him,” Denise said per People. “But it would be nice to not say anything negative about me with the kids that hear about it.”

Denise added: “There’s a lot that the kids don’t know about their dad and I want to keep it that way.”

Denise shared a positive co-parenting update with US Weekly. “Communication’s great with him,” she told the publication. “[My husband] Aaron [Phypers] and I actually saw him the other day.”

Plus, Charlie doesn’t watch the drama go down on RHOBH. “I don’t even think he knows [what’s airing], but he knows obviously when you file something in court that it’s public,” she explained. “He and I have dealt with this stuff for, gosh, 14, 15 years.”