The catalogue of modern screen Santas is truly random – Tom Hanks, Paul Giamatti, Mel Gibson. But the casting of the 47-year-old David Harbour in Violent Night may mark the first time the big man has been played in a major motion picture by a representative of Generation X. Appropriately, Harbour imbues the part with a degree of slacker bafflement, confessing he still doesn’t understand how the magic works. 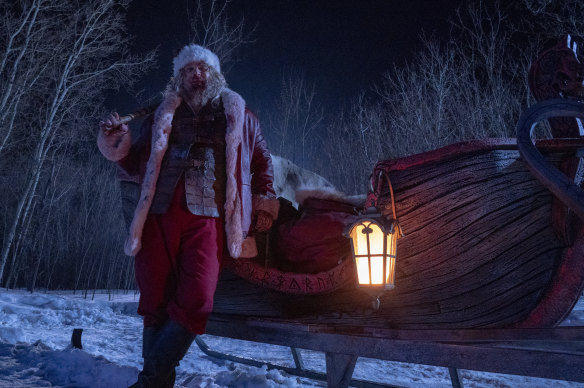 David Harbour plays a savage Santa in this action-comedy reworking of the Christmas myth.

As you may have guessed from the title, Harbour isn’t playing the cuddly, G-rated Santa who hangs out at malls. Rather, Violent Night is an edgy action-comedy in which jolly old St Nick gets his Die Hard on, a form of counter-programming that threatens to become a Yuletide tradition in its own right.

This variation on the theme comes from Norwegian director Tommy Wirkola, who made his name in Hollywood with Hansel and Gretel: Witch Hunters, and the screenwriting team of Pat Casey and Josh Miller, whose more notable credits include the Sonic the Hedgehog films.

Initially, the plot centres on a wealthy family, the Lightstones, who have gathered at their remote compound on a snowy Christmas Eve for the traditional exchange of snarky remarks. But when a gang of mercenaries breaks in and take everyone hostage, guess who comes down the chimney to hand out some Christmas justice?

The rest is smooth sledding: Santa chews on a candy cane like Clint Eastwood with a cigar, the main villain (John Leguziamo) calls himself Mr Scrooge, someone is impaled on a pair of antlers, you get the picture. If this script took more than a weekend to write, either Casey or Miller was slacking off.

That said, it’s slickly done. Production designer Roger Fires has evidently enjoyed himself coming up with decorations that can be turned into torture implements, while Wirkola handles the gory action sequences like he’s auditioning to direct the next Deadpool (David Leitch, who directed Deadpool 2, is a producer).

In between, there’s no lack of what censorship bodies refer to as “crude humour”, from the moment we glimpse Harbour’s Santa urinating off the side of his sleigh in flight. The touches of satire are more half-hearted – inevitably so, since the premise requires us to accept the greedy, unscrupulous Lightstones collectively still belong on the nice list.

Feebler still are the efforts to convince us the movie has a heart, personified by little Trudy Lightstone (Leah Brady), whose faith in magic makes the whole thing possible. Guys, if you’re going to trash the spirit of Christmas, just trash it, OK? If you’re old enough for this kind of movie, you’re too old for a nostalgic yearning to be sitting in anyone’s lap.

A cultural guide to going out and loving your city. Sign up to our Culture Fix newsletter here.