ROME — “At the Colosseum, the wisest choice is to avoid speaking too much – the competition is 100 to zero,” said Diego Della Valle, chairman and chief executive officer of the Tod’s Group.

To be sure, the fascination with the majestic Roman landmark and a globally recognizable symbol of Italy, never wanes. Guests at the press conference, held here on Friday by Tod’s in the presence of Italy’s Minister of Culture Dario Franceschini, were duly impressed by the completion of the second phase of the Colosseum’s restoration work supported by the luxury brand, which also marked the 10th anniversary of the beginning of the project.

This second chapter began in December 2018 and recovered the amphitheater’s hypogea below the arena — the backstage where gladiators and wild animals would converge and that was not visible to the spectators.

The entrepreneur has long made social sustainability a key responsibility for his company and through his own personal investments. At the same time, he has been urging his peers to be equally supportive of social initiatives. During the interview, he acknowledged the funding of the restoration of Rome’s Trevi Fountain by Fendi; of the Spanish Steps in the Italian capital by Bulgari, and of the Ponte di Rialto in Venice by Renzo Rosso through his OTB group.  “It’s so edifying to see this progress and public and private organizations working together successfully. And especially now, in such a delicate moment, after all the tragedy we never thought we would see in our lives.”

Della Valle has always waved the Made in Italy flag and sees opportunities ahead for the country, protecting its heritage and unique craftsmanship. Asked to comment on the increasing spirit of collaboration between brands and the acquisitions made to support small and medium-sized companies, such as that of Prada and the Ermenegildo Zegna Group partnering to buy cashmere specialist Filati Biagioli Modesto, Della Valle replied simply: “We must all work together, without wasting any time.”

Incidentally, asked about potential developments in the wake of LVMH Moët Hennessy Louis Vuitton upping its stake in the Tod’s Group in April to 10 percent, Della Valle once again pointed to the longtime friendship with the French group’s chairman and CEO Bernard Arnault. “And I sit on the board of LVMH. Any other comment is price sensitive,” he demurred, since both LVMH and Tod’s are publicly listed.

He acknowledged the opportunities offered by the European Union’s pandemic Recovery Fund and the Italian government’s 220 billion-euro PNRR, the Recovery and Resilience Plan mapped out by Prime Minister Mario Draghi, but he also underscored the importance of giving back and redistribution. “It’s a moment that requires social conscience and social responsibility.” He is aware that the younger generations are increasingly watchful and attentive to social sustainability and, in this light, Tod’s has asked digital entrepreneur Chiara Ferragni to be a member of its board, as reported. “She will help us identify solidarity projects,” Della Valle underscored.

He said he hoped the funds earmarked by the government will help protect small and medium-sized companies, but also expressed his confidence in the “autonomy” of the fashion industry, which has for the most part relied on its own resources for years. Della Valle believes the European funds could help companies in terms of research and development and new technologies.

The latter has been top of mind for Della Valle, who has been spearheading a digital transformation of his group. He candidly admitted he did not initially believe the online platforms were “appropriate” to sell luxury goods, but he has clearly changed his mind. “Omnichannel is the only way forward.”

The digital world has also been helping to change Tod’s communication and relate the new product offer, but Della Valle once again stressed the restoration of the Colosseum was an initiative “for the country, with no commercial or marketing return.” In fact, he noted that the project has lived through seven different ministers, but always with the support of the government — despite some initial glitches — “because this is a watertight operation,” conceived to support an iconic monument for the country.

In 2011, Della Valle said he was pledging 25 million euros for the restoration of the Colosseum and on Friday, asked to comment on the figure, he confirmed it, with no changes. 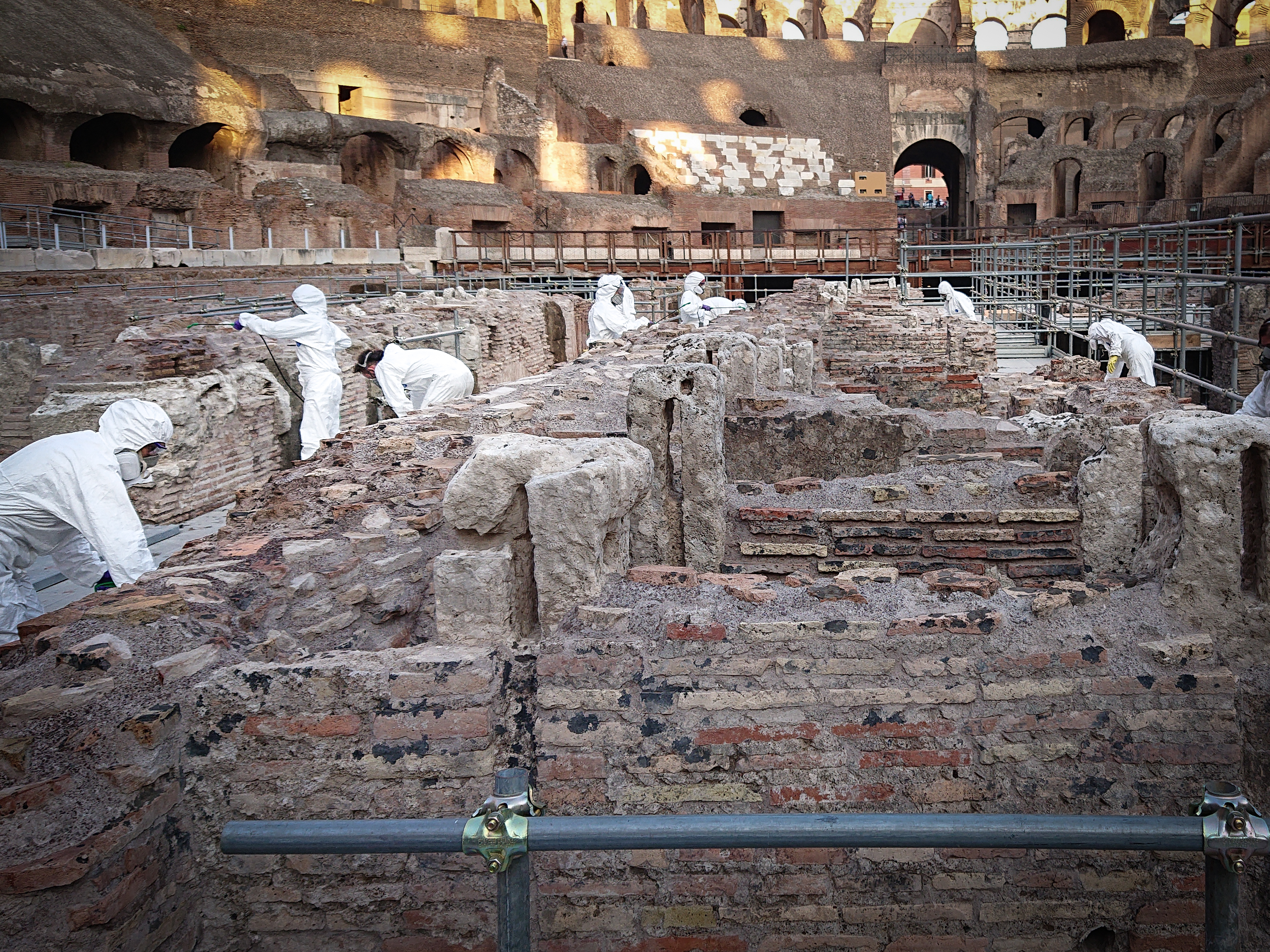 The restoration works at the Colosseum. A.Tagnani – courtesy image

The first part of the works on the Colosseum started in September 2013 and were completed in 2016 with the restoration of the external facade, and in this second phase, which began in December 2018, a 525-foot-long walkway was installed in the monument, opening up an area that had never been accessible to visitors before.

The Colosseum’s hypogea extend for about half a hectare and are surrounded by a perimeter wall and 14 partitions that identify a network of corridors. The central corridor housed the machines and equipment necessary for the performance of the shows at the venue, which could accommodate between 50,000 and 75,000 spectators. After 781 days from the opening of the construction site and more than 55,700 hours of work, the restoration sees the recovery of an area that spans 162,000 square feet, which will be open to the public starting on Saturday. A total of 81 people — including 45 restorers, 14 archaeologists, 13 construction workers, four engineers, three architects and two surveyors — were involved in this second phase.

“I saw the Colosseum when I was 10 years old with my parents,” said Della Valle’s brother Andrea, vice chairman of the group, at the end of the event, clearly moved by the experience. “They are no longer here and I wonder how they would feel about all this.” Pride, it’s safe to say. 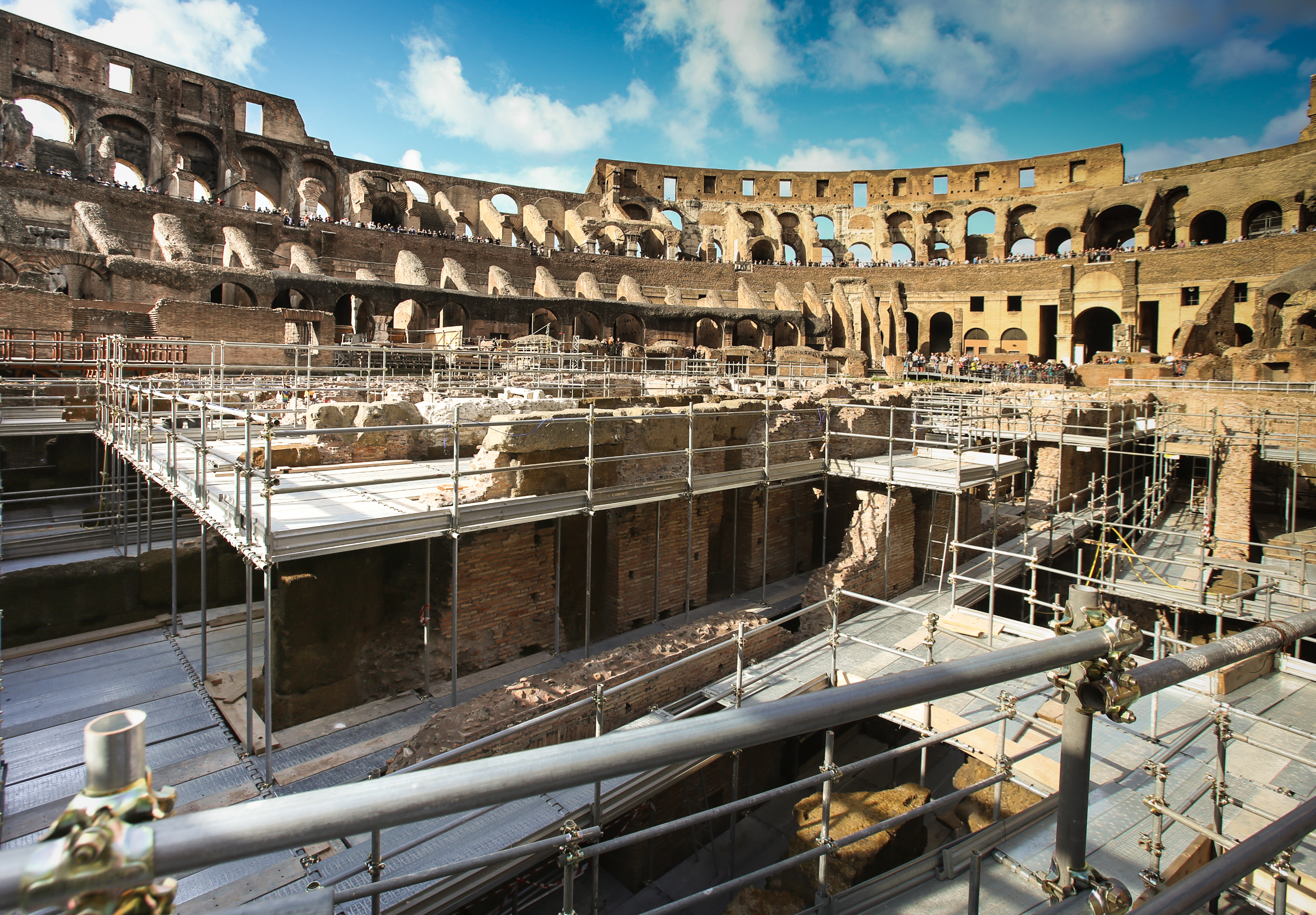 A view of the works on the Colosseum. Massimo Testa