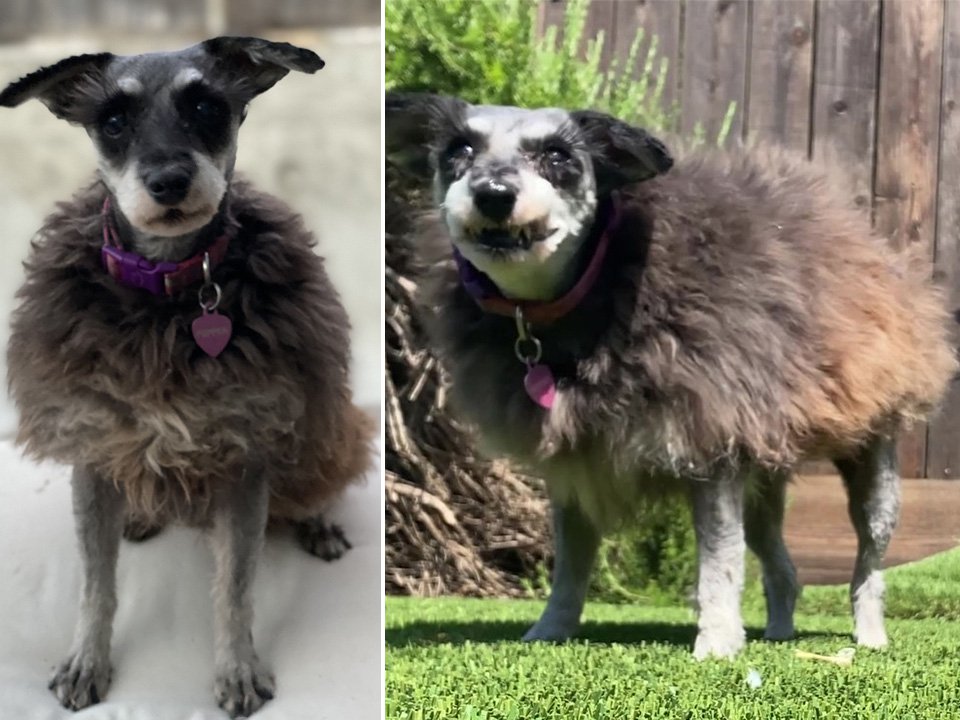 Ever had a bad haircut? Chances are it was nothing on what poor Pepper’s got to deal with.

Pepper the 13-year-old toy Schnauzer ended up looking like a tiny sheep after her owner Claudia Brewer tried to give her a summer trim.

Claudia had hoped her skills as a hair stylist might come in handy for her dog since she couldn’t get an appointment at the groomers.

However, she didn’t expect the dog to be such a ‘difficult customer’.

The diva dog spent 30 minutes squirming to avoid having her belly and back trimmed.

In the end, Claudia admitted defeat and left the fur there long.

‘She likes her feet done, but then as I was going up her legs she was a difficult customer,’ Claudia said.

‘She doesn’t like it if I try to cut underneath her, so I tried to cut the main body, but then I just avoided it and turned her into a little sheep.’

The good news is that Pepper’s seemingly fine with how she looks, and her eye-catching look has made her a hit on TikTok,.

Claudia said: ‘She seems to like it and she’s not getting too hot.

‘Now my nephew wants me to shave his dog like a teddy bear.’

Claudia’s husband Jacob said: ‘I came home and thought she looked like a sheep right away. With the scrawny legs and fluffy body.

‘It’s funny watching her run around because the fluff has a lot of bounce in it, but it’ll be good to get her back to the groomers when they’re less busy.

‘Claudia’s definitely better at styling humans than styling dogs, and I think she’d agree with that. When she gets an idea, she likes to go with it.’

Claudia said: ‘I was dying laughing. And then we had a party for Mother’s Day and people were asking “what is that?” They went nuts over her new look.

‘She gets lots of attention and everyone wants to see her. People are always asking about her. I’m going to leave the haircut.’